The Best Places To Throw Back Some Drinks And Watch The World Series Around L.A.

It's time for baseball, baby! That's right—L.A. clinched a World Series spot one year shy of a 30-year drought, and L.A. is ready to party. How ready, you ask? Tickets are egregiously expensive and the weather is on fire. This means it's best to take the party to a bar, where you can yell at a television screen among fellow fans, revel in the unifying power of a mutual enemy, and all of a sudden become a Baseball Expert despite never having paid attention to the sport before (ok, I'm projecting). If nothing else, it'll be an opportunity to catch a glimpse of Yasiel Puig sticking out his tongue to the joy of Doyers fans all over.

Now that I've put you in the right mindset, you must be wondering: but where, oh where, to go? Lucky for you, this article is called "The Best Places To Drink Get Drunk And Watch The World Series," so the answer is right here! The World Series could last a whole seven games, so maybe switch it up and watch each game in a new spot. Or don't! It's your life. But it's your life in a Dodgers world.

First pitch for each game is at 5:09 p.m. and the only night without a game is Thursday, when the Dodgers travel to Houston after the first two games at Dodger Stadium.

Get in here and get you one of these tonight. (not Shirley) #itfdb #thegreyhoundla

The Greyhound is so dedicated to the Dodgers that they serve a "blue hour" menu during every game. From first pitch to last out, you can order several permutations of wings-by-the-pound and beer served in either a pitcher or bucket. Each order is named after an iconic Dodger player, from Fernando Valenzuela to Clayton Kershaw. The place is sure to be packed (it won the title as best bar to watch the Dodgers by L.A. Weekly in 2015), so make sure to get there early.

Let's Go Dodgers!! See you tonight to cheer on our Boys in Blue! ⚾️🍺

33 Taps has two locations in L.A.—one in Hollywood and one in Silver Lake—so that's double the space to catch the World Series. Both have had huge turnout for the playoffs, so expect the World Series to bring equal (if not bigger) crowds. The games will be playing with sound all week, and some giveaways and surprises are in store. Most of them are under wraps, but the Silver Lake location will be giving away some free Dodgers desserts in the classic upside-down baseball hat. 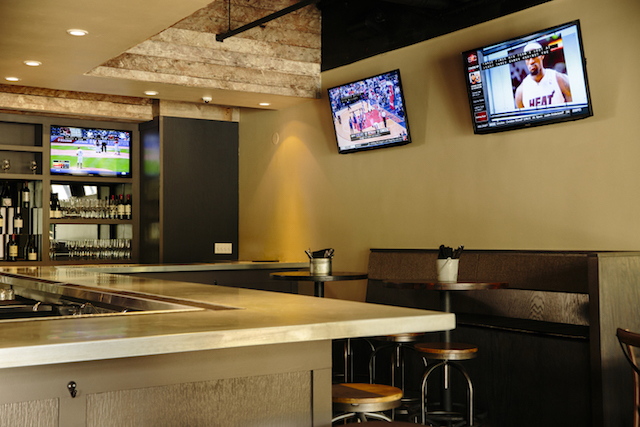 BUTCHER'S DOG
For Westsiders, The Butcher's Dog is a great games option. The bar is in Sawtelle Japantown and will be screening every Dodgers game with sound. Plus, they have a fantastic happy hour every weeknight from 3 to 7 p.m., so feast on truffle parmesan fries and fried chicken sliders with $6 off every pitcher. They normally do trivia nights on Tuesdays, but this Tuesday the game will be silent to accommodate the World Series screening. Are you showing up just to join the viewing party but would much rather put your pop culture knowledge to good use? Here you can do both.

This brewery is a constantly-packed spot in the Arts District with a big patio, a big tap room, and plenty of games and TVs. They'll be playing each game with sound, so it'll be a great spot to drink home-grown beer while watching our home-grown team (Brooklyn years notwithstanding) battle the Houston Astros. They don't have any specific World Series specials, but the brewery regularly has a weekday daily beer special for only $5. Neal Fraser's Fritzi Coop also has a takeaway window, so this place is all about local beer, local food, and local baseball. 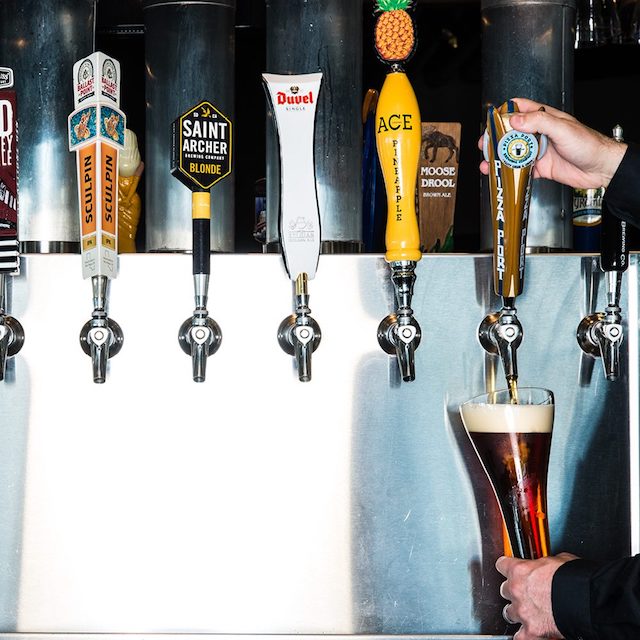 The beer at Yard House. (Photo via Yard House on Yelp)

Yard House has several locations across L.A., but the Long Beach location has the added bonus of being right next to the water in Shoreline Village. The menu and beer list are massive, and they'll be playing all the Dodgers games for the duration of the world series. They have a regular happy hour on weekdays from 3 to 6 p.m., and then a late-night happy hour on Sundays through Wednesdays from 10 p.m. til closing. The Dodgers games will overlap both of these happy hours, so it'll be easy to begin and end your night with inexpensive beer and massive towers of onion rings. 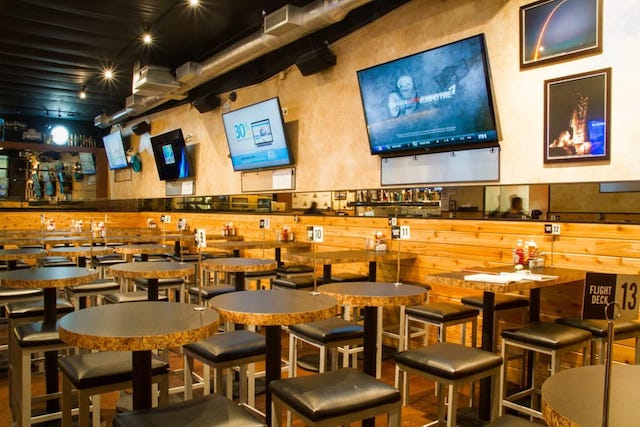 The TVs at Flights. (Photo via Flights Beer Bar on Yelp)

Flights has a who's who of local brews on tap; the current listing is marked with appearances by stalwarts like Smog City and Phantom Carriage. And, certainly, the menu plays all the favorite hits with loaded carne asada fries, stacked burgers, and an assortment of wings (also, if you're into aviation terminology, the menu at Flights is rife with references). One thing that separates Flights from the others? There's apparently a free comedy show that'll take place after Game 1 on Tuesday (and every following Tuesday). Whether you're celebrating a Dodgers win, or mourning a Dodgers loss, some laughs would be a welcomed thing. 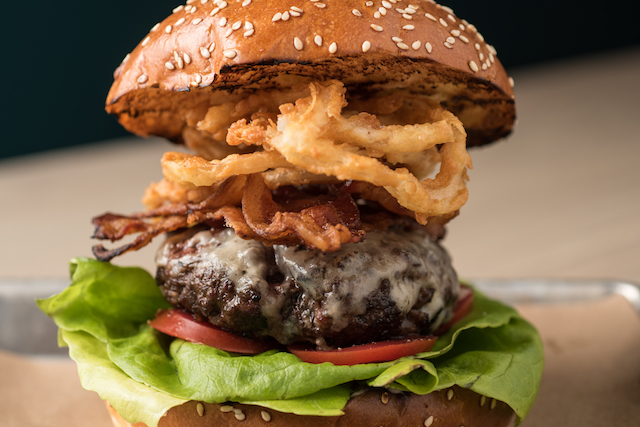 The Mikkeller Burger, which is part of their Burger and Beer special that will run for the entirety of every Dodgers game. (Photo by Wonho Franke Lee courtesy of Mikkeller)

MIKKELLER DTLA
Mikkeller hasn't been around for long, but it's built a name for itself as a beautiful and massive space to drink high quality beer downtown. They're excited to join the Dodgers momentum, and will show the games with sound on a 160 in. screen in the main room (the screen is normally tucked away in the ceiling). They'll also offer their Burger and a Beer deal for the entire duration of all World Series games. The deal, which is normally only available M-F from 5 to 7 p.m., is the Mikkeller Burger and a Mikkeller San Diego beer for $15. 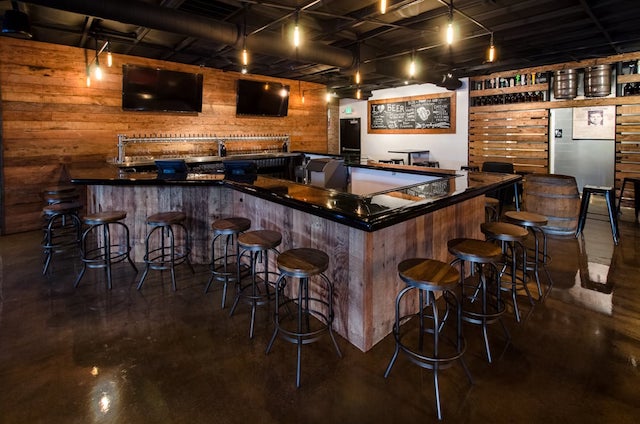 Some of the TVs that will be displaying the Dodgers games. (Photo via Junction Bar on Yelp)

Junction Bar in Downey is a huge space with exclusively beer on tap, and they're showing all the Dodgers games for the World Series. They also have a lot of billiards tables for if you need to distract yourself in moments of game stress. They've been a reliably popular Dodgers bar all season, so the energy will likely continue for the duration of the World Series. They also serve up a lot of beer from local breweries, so the L.A. pride can run deep while watching the game. 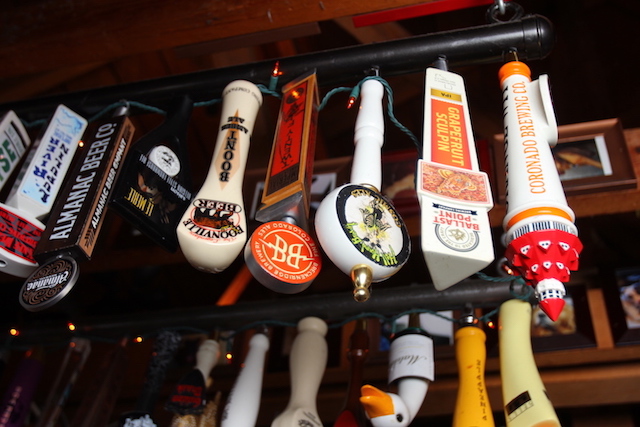 The taps at Blue Dog Beer Tavern. (Photos via their website)

Blue Dog Beer Tavern in Sherman Oaks is a great spot for watching sports—and watching dogs. We know a good dog-watching place when we see one, and this bar has the added bonus of screening all the World Series games while the Dodgers play. With plenty of beers on tap and exceptional burgers and nachos, it is sure to be a prime viewing experience. Plus, try to imagine something more L.A. than watching the Dodgers deep in the Valley.