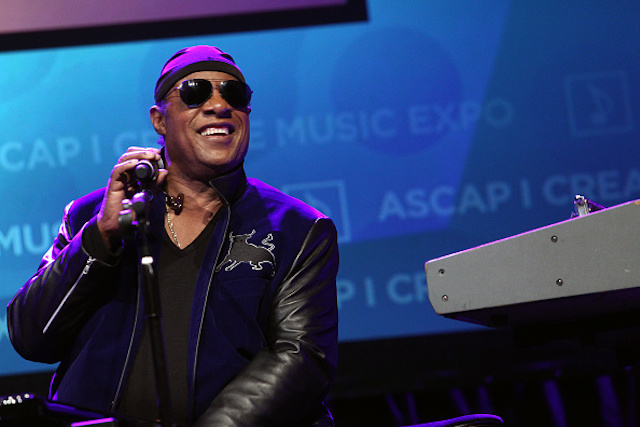 Wonder onstage at the ASCAP 'I Create Music' Expo in Los Angeles, 2017. (Photo by Tommaso Boddi/Getty Images for ASCAP)

It's an exciting time for the Los Angeles Dodgers, between that NL pennant win and turning Pink's Hot Dogs blue. Now, Stevie Wonder has made the team an offer they can't refuse, telling TMZ Sports that he's willing to serenade the Dodgers with a harmonica rendition of the national anthem as they play in the World Series this week.

When asked by a TMZ reporter if he'd be willing to sing the national anthem, Wonder responded, "You know, I love the song...and I love playing it on the harmonica." The TMZ reporter pressed Wonder—who knelt at a recent concert to show support for NFL players protesting during the national anthem —to answer whether he'd sing the anthem at the World Series while taking a knee. In response, the 67-year-old music legend paused and responded, "You know what I would do. You know me."

Sure, a TMZ interview isn't exactly a formal promise to appear, but we can only hope the Dodgers will hit Wonder up to make his harmonica rendition of the national anthem a reality. Even if the Dodgers lose (god forbid), Wonder's appearance at Dodger Stadium would certainly make that four-figure ticket price a little more worth it.

If nothing else, Wonder on harmonica could help erase the painful memory of that time Flea performed the national anthem on bass at the Staples Center: