The Spookiest Spots In L.A. That Are Scary Year-Round

We’ve covered lots of possibilities for haunted frights in the L.A. area this Halloween season, but seasonal haunted houses aren’t the only way to get spooked in this city. Los Angeles has no shortage of eerie locales, from abandoned hospitals to suicide locations to the mysterious occult history of our most important scientific research institution, so don’t let the interminable sunshine distract you from the darkness within. 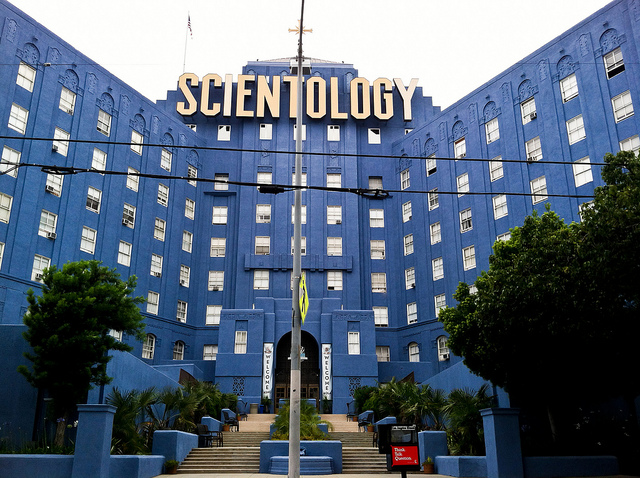 The Scientology West Coast HQ. (Photo by evdropkick via the LAist Featured Photos pool on Flickr)

The Church of Scientology owns an absurd amount of property in Los Angeles (reportedly $400 million in Hollywood real estate holdings alone, according to Curbed LA) and the buildings are anything but subtle. From the massive blue West Coast HQ on Fountain Avenue to the media studios on Sunset Boulevard to the Celebrity Centre on Franklin Avenue, the buildings occupy massive amounts of space and all feature prominent displays of the Scientology names. Many of the buildings are open to the public as well; the Celebrity Centre, for example, hosts regular tours and even has a French restaurant on its campus. The scariest part is how blatantly the Church has bought these properties, all in cash, and displayed their name despite years of ex-members decrying the religious organization and condemning it as a cult. Perhaps, as Scientology demonstrates, the most effective way to allow for something seedy to exist is to thrust it into coexistence with the regular world. 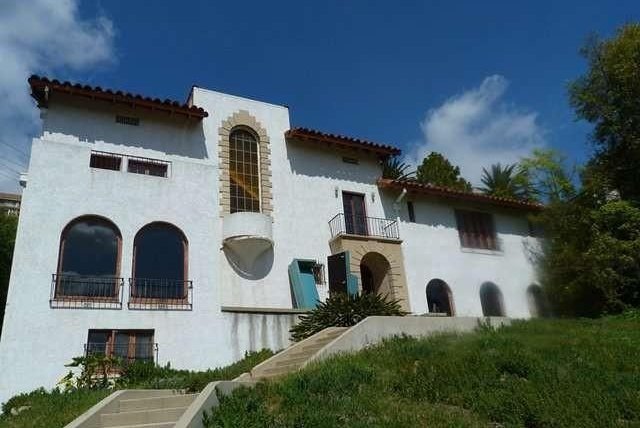 The Los Feliz murder house when it was put up for sale.

Up in the hills of Los Feliz sits a beautiful mansion that for decades sat in disrepair; boarded-up windows and peeling wallpaper attracted no one but ghost hunters. It was the site of a mysterious murder-suicide in 1959, when a cardiologist named Harold Perelson murdered his wife in her bed and attempted to kill his daughter as well. His attempt faltered, though, and the daughter escaped to tell the police. Perelson’s youngest children woke up from the noise, and he told them they were having a nightmare and to go back to sleep. He then overdosed on pills and died before the police and ambulance arrived at the house. The house was sold to a couple the following year, but they never moved in. Rumors of a family renting the home and leaving Christmas decorations swirled for years, and the house remained an eerie landmark in an otherwise peaceful Los Feliz neighborhood. That is, until 2016, when the attorney Lisa Bloom purchased the property. Yes, Lisa Bloom, daughter of Gloria Allred, brief adviser to Harvey Weinstein. The house itself no longer has the visual appeal of a haunted mansion, but it’s now haunted by the eerie reality of a woman who, at one point, claimed alleged serial sexual violence can be remedied with an apology and therapy. 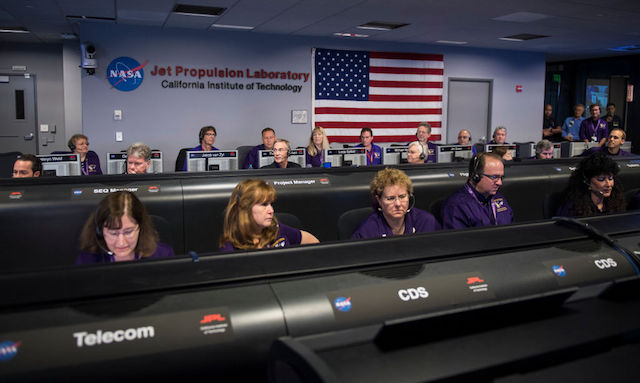 Do all these JPL scientists know their history? (Photo by Joel Kowsky/NASA via Getty Images)

Over in the mountain-y suburb of La Cañada Flintridge sits the Jet Propulsion Laboratory. For the uninitiated, JPL is a NASA research site and is the operation site for NASA’s Deep Space Network and the Mars Science Laboratory mission (the Curiosity rover comes from this mission). How is any of this spooky? Sure, the existential questions that arise when contemplating the size of the universe aren’t necessarily safe and comforting, but scary seems a little far-fetched. JPL isn’t just a NASA site, though. The research organization got its start at the hand of one Jack Parsons, former occultist and contemporary of L. Ron Hubbard.
Parsons, along with a group of CalTech students, conducted rocket science experiments in the Arroyo Seco. These experiments eventually caught the eye of the U.S. Army, and Parsons & co. started developing technology for WWII. The company was signing contracts left and right, the JPL research arm was performing more and more rocket experiments, and the original CalTech gang was setting the groundwork for America’s entrance into the Space Race. All the while, Parsons was embedding himself into an occult lifestyle. He eventually became head of the west coast branch of the Ordo Templi Orientis and began dating his wife’s 17-year-old sister thanks to the “sexual permisseveness” of O.T.O. His affiliation with the occult began encroaching on his professional prospects and hindered JPL’s chances of getting contracts, so he was forced to sell his interest in the company, according to Grantland. So what’s scarier: knowing one of the smartest scientific research centers in America exists because of the experiments of an occultist, or that his dark actions weren’t held accountable until they started costing his company money? 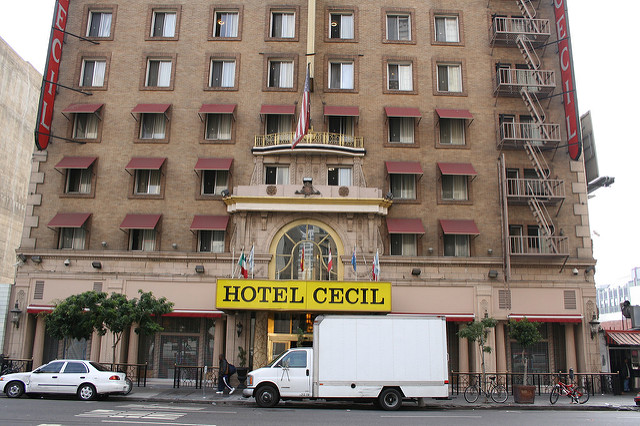 The Cecil Hotel has since been rebranded as Stay On Main. (Photo by Jim Winstead via the Creative Commons on Flickr)

The Hotel Cecil, located at 640 South Main Street downtown, still has the original signage painted on the south side of the building. It advertises “Low Daily Weekly Rates” on faded red paint and the old blade signs proudly display the Hotel Cecil name on either side of the building. Despite its historic and elegant appearance, the Hotel has a long history of murder and suicide within its walls. James T. Bartlett made a point to uncover all the suicides, murders, or inexplicable deaths at the hotel in his book Gourmet Ghosts, and the list is long and harrowing. There are even rumors the Night Stalker stayed there and that the Black Dahlia had a drink at the hotel bar days before her murder. The mystery continues to contemporary Los Angeles; in 2013, the body of a 21-year-old student named Elisa Lam was found decomposing in a water supply tank on the roof. By that time, the hotel was rebranded as a budget hotel called Stay on Main, but only a portion of the hotel had been refurbished. The hotel was eventually purchased by a major NYC hotelier, who had big plans to completely refurbish the interior. The hotel gained historic recognition by the City in February of this year, and construction on the interior is supposed to last until 2019, according to Curbed. The Hotel really includes the whole spectrum of Los Angeles frights: murder, mystery, and the arrival of developers. 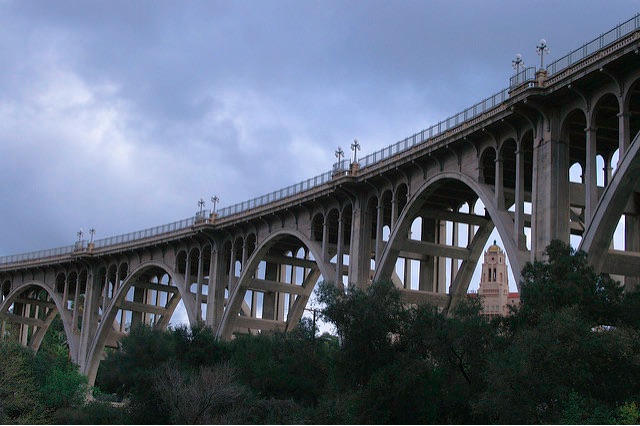 The Colorado Street Bridge. (Photo by Karol Franks via the LAist Featured Photos pool on Flickr)

On the western edge of Pasadena, a bridge stands adjacent to the 134 freeway. It's a beautiful testament to beaux-arts architecture and is also the site of a century's worth of death. Back in the 1930s, during the Great Depression, the bridge was a popular place for jumping to one's death (some reports say up to 50 suicides occurred here from 1933 to 1937). The suicides, while most prominent in the 30s, continued for the rest of the century, prompting the city to install anti-jumping fences in 1989, according to Atlas Obscura. This didn't end the pattern, though; a recent uptick showed six deaths at the bridge in four months. Pasadena City Council has responded by looking into more potential long-term solutions for preventing suicides off the bridge, like installing mesh and hiring bridge patrol.
There's also a rumor the dark cloud over the bridge stems from its construction; apparently, a worker from the team that built the bridge fell to his death while on the job. As the story goes, his body fell into wet cement at the base of the bridge, and remains there today. Among the many suicides and death, though, the bridge has seen one survivor: Jean Ward. In 1937, her 22-year-old mother threw her off the bridge before jumping off it herself. The mother died, but branches softened Jean's landing and spared her life. 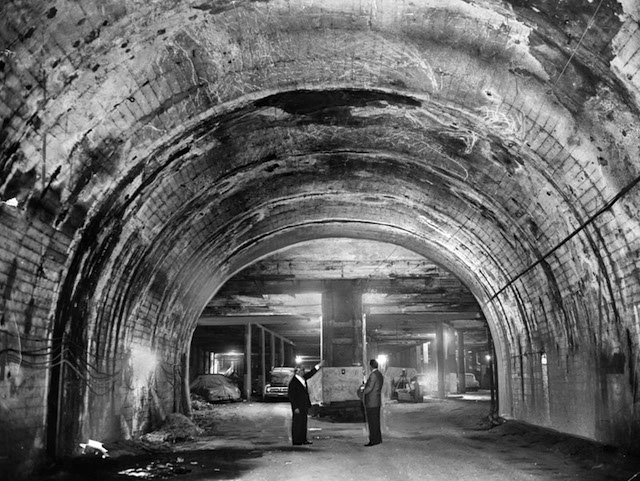 THE TUNNELS UNDERNEATH DOWNTOWN

Downtown's incessant growth asks us to look up, but some of its most fascinating (and eerie) history is underground. On the northern half of downtown, approximately 11 miles of tunnels weave underground paths. Their origins are fairly innocuous—a simple alternative to the above-ground roads—but their actual history is anything but. During the 1920s, these tunnels provided a great method for smuggling alcohol during Prohibition, and there are even some speakeasies along the route (Cartwheel Art hosts a weekly tour exploring all the former illicit underground sites). One tunnel also used to connect an old courthouse and jail so criminals could move from cell to courtroom for their trials. One of those criminals was famed mobster Mickey Cohen, who walked the tunnels in 1951. The tunnels are now more bureaucratic than anything else, providing access to County archives as well as a place for government workers to take a lunch-time jog, as the L.A. Times reports. So now, go down into those tunnels, and wonder if the pasty man running past you in a suit is just a sun-deficient administrator or a ghost of criminals past.
The walking paths aren't the only tunnels beneath downtown, though; remnants of L.A.'s formerly robust public transportation system exist as well. Most of them are sealed off at this point, but one old terminal underneath the Metro Terminal Lofts is still accessible and, you guessed it, poised for redevelopment. 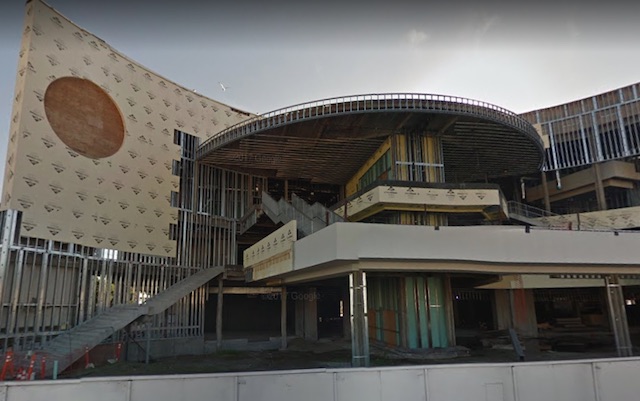 THE TARGET HUSK ON SUNSET AND WESTERN

Back in 2010, the City approved the construction of a Target on the southwest corner of Sunset Boulevard and Western Avenue. Little did they know that the Target would still only be half-built, seven years later. The saga of the half-built Target, also known as the Target Shell or Target Husk, has been one of extreme ups and downs. Lawsuits focusing on zoning legality and environmental impact have stalled the project from the get-go, but the company proceeded with construction anyway, backed by the sheer force of will known only to massive corporations. In 2014, it officially reached an impasse, and it has remained in stasis ever since. A judge blocked the construction again as recently as May of this year. The building is still too young to have ghosts haunting its walls, and it is not an officially abandoned site, but the sheer potential for spooks and infrastructure decomposition make it a frightful place if I've ever heard one.