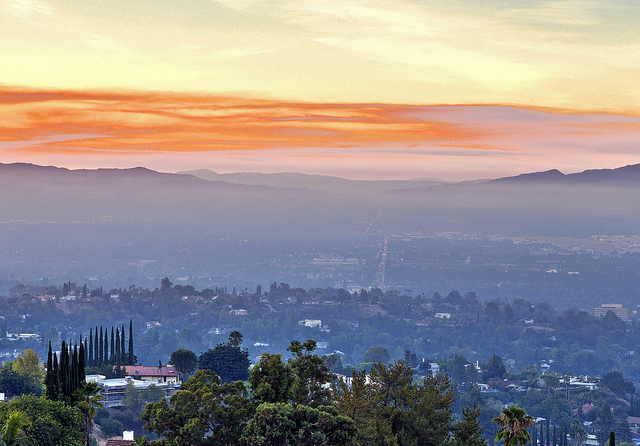 Robbie Munroe, a meteorologist with the National Weather Service, told LAist that record-setting high temperatures for this day of the year were seen in downtown Los Angeles, at Los Angeles International Airport, in Long Beach, Burbank, Camarillo and Oxnard.

Munroe wasn't familiar with a particularly historic 1965 heat wave that led to so many longstanding records being set that year, though he did say that "it was definitely an unusually hot period, given that widespread records were set [that year] for both today and tomorrow and the next day."

Records may also end up being broken in Santa Barbara and NWS's desert sites in Lancaster and Palmdale, all of which are currently a degree or so away from their current record temperatures. And don't expect any immediate relief: according to Munroe, Angelenos can expect more of the same Tuesday, and tomorrow may bring slightly warmer temperatures by a degree or two.

"I wouldn't necessarily say it's any more unusual than being set any other day," Munroe said when asked about the importance of such a large number of records being broken on a single day in October. "What's more unusual is the extent at which some of the records are falling," Munroe explained, noting that downtown had surpassed its previous record temperature by four degrees, and Camarillo's record had been surpassed by nine.

So, uh, does this have anything to do with global warming? "That's not something that we really focus on," Munroe said. "We just focus on the next seven days." Honestly, same.

Still, something definitely feels a little abandon-hope-all-ye-who-enter-here-y about our current Inferno... So we had to ask—even strictly speaking within the aforementioned seven day timeline—is there any chance the world is ending?

"The world is not ending," Munroe said [when directly asked if the world was ending]. "The biggest concern with this current heat wave is that we have some wind with it, so we have fire weather concerns." The National Weather Service issued a red flag fire warning on Monday that will be in effect through Wednesday, warning that the potent combination of Santa Ana winds and triple-digit temperatures could "bring the most dangerous fire weather conditions that Southwest California has seen in the past few years."

Please, for the love of all that is holy, no one throw a lit cigarette out the car window in the canyon.