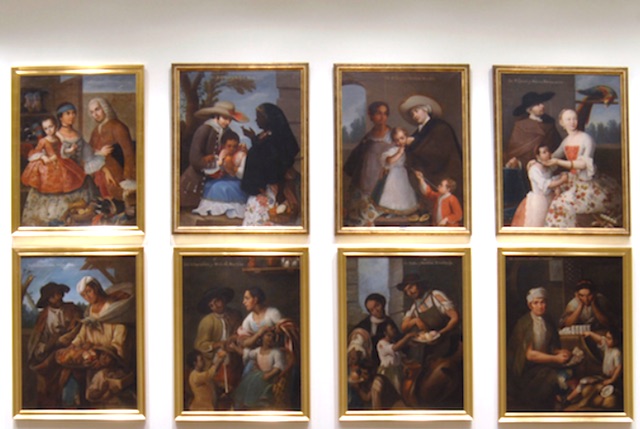 Some of Miguel Cabrera's 16 casta paintings. (Via LACMA)

A scintillating mystery from the art world is playing out in Los Angeles. The L.A. Times published a story Sunday on a long-lost painting that’s been nicknamed “Española,” or Spanish girl. The panting is the work of painter Miguel Cabrera, who Christopher Knight, the Times’ art critic, describes as “the greatest painter of his age in Mexico.”

"Española" was painted as part of Cabrera’s take on the casta, or caste, genre, which explored themes of class and miscegenation during the viceroyalty of New Spain. As explained at Not Even Past, a history website founded at the University of Texas at Austin, the genre was popular during the eighteenth century, and remained so until most of Spain’s American colonies became independent in 1821. Casta paintings depicted the offspring of racially mixed couples; the unions involved Indians, Africans, and Spaniards.

There was also a very specific structure that was bestowed on the genre, as “Casta paintings were presented most commonly in a series of sixteen individual canvases or a single canvas divided into sixteen compartments,” explains Not Even Past, adding that, “The series usually depict a man, woman, and child, arranged according to a hierarchies of race and status, the latter increasingly represented by occupation as well as dress by the mid-eighteenth century.” NPR added that the genre “reveals more about prejudices in Spain at the time than the reality in Mexico,” presenting an “idealized Mexico where people of African, European and indigenous heritage were intermingling in seeming harmony.”

"Española" was among Cabrera’s works in his set of 16 casta paintings, which were done in 1763, according to the Los Angeles County Museum of Art. Two of those paintings ("Española" among them) would go missing for a long length of time, with one of them uncovered back in 2015, when it was discovered rolled up and hidden underneath a Bay Area couch.

That leaves "Española" as the sole missing puzzle. While Ilona Katzew, a curator of Latin American art at LACMA and an expert on casta paintings, has wondered about the location of that elusive painting for years, a mysterious letter suggests that it may have resided in L.A. this entire time…and just two miles away from the museum.

As detailed at the Times, Katzew received a letter in 2015 that was, bizarrely, written in the first-person voice of the painting. “You should know that I am well and living less than two (2) miles from LACMA,” the letter read (you can view it at the Times). It adds that it’s “been in the same family” for about sixty years, and does not know “how I was acquired.”

It also says that, “My owner has enjoyed seeing #6,” a reference to the missing painting that was found in the Bay Area and subsequently acquired by LACMA, who put it on view for the 2015 presentation “50 for 50: Gifts on the Occasion of LACMA’s Anniversary.”

The "Española" of the letter adds that it would be willing to re-surface and be put on display if there’s ever a “reunion of all my siblings.” The Times notes the last time that (most of) Cabrera’s casta paintings were put together was in 2009, when 14 of the 16 works were presented at the Philadelphia Museum of Art.

As for why Katzew believes this letter is the real deal, the missive came with a set of photographs of "Española". While there are no contemporary images of the painting, or even any written descriptions, Katzew believes that the style and quality of the painting depicted in the photos suggests that the letter is more than a cruel gag. Of course, there was no return address on the envelope, nor were there any other helpful clues that could pinpoint the location of Española.

It's likely that you're entertaining thoughts of finding the painting yourself. Not so fast Poirot; a two-mile radius covers plenty of property in L.A. (map below), so the going will be tough. Could it possibly be in Canter's? Or the Roscoe's on Pico? It's now up to you to figure out (though, really, you should leave it to the experts). 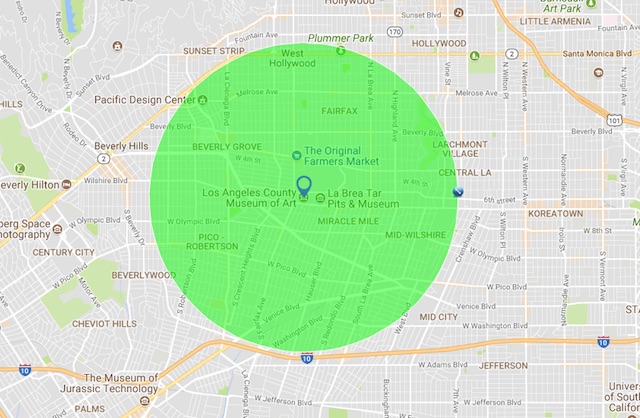