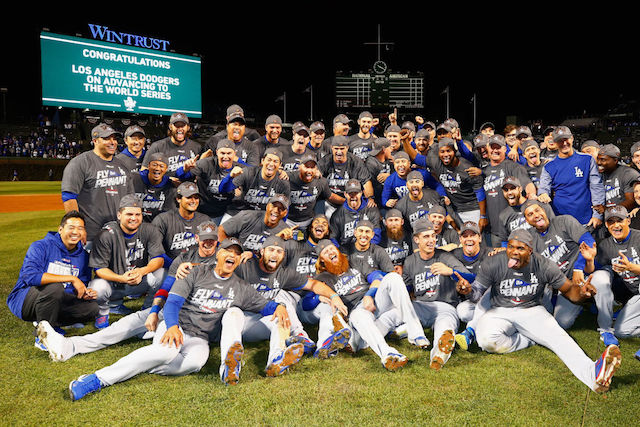 The Dodgers after winning the NL Pennant. (Photo by Jamie Squire/Getty Images)

Because apparently Los Angeles can only have so many good things, the first two games of the World Series at Dodger Stadium may be the hottest World Series games ever. Yes, you read that correctly: no World Series games since its 1903 beginnings will have played in heat as extreme as what is projected for Games One and Two between the Dodgers and the Astros.

“Games One and Two could be the hottest world series games on record at the time of first pitch,” said AccuWeather Senior Meteorologist Dan Pydynowski. Temperatures are expected to reach 100 degrees F for Game One and 102 degrees F for Game Two. According to AccuWeather, the previous record for hottest World Series game was a 2001 game in Phoenix, AZ, between the Arizona Diamondbacks and the New York Yankees (the Yankees would have played in the heat again this week if they hadn't lost to the Astros Saturday night). City News Service points out that the Phoenix stadium had air conditioning during the 2001 game; Dodger Stadium does not.

AccuWeather notes the Santa Ana winds will largely be the source of the heat, and that they will be "gusty" and may swirl around the park during the game. As the game progresses, the heat should cool down. Fall heat in L.A. doesn't remain consistent all night the way it does during the summer.

First pitch for the first two games are at 5:09 PST Tuesday and Wednesday at Dodger Stadium. Considering the heat, and the high price of tickets, it's probably a better idea to watch on TV. If you do attend the games, though, make sure to stay hydrated.