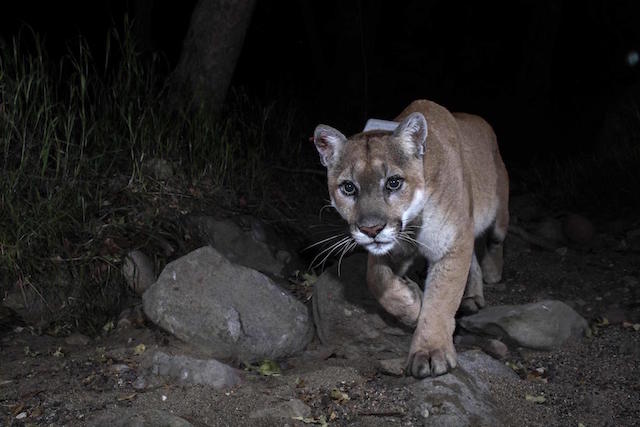 Look at those eyes! (Photo by Miguel Ordeñana, courtesy of the Natural History Museum of Los Angeles)

In 2016, the City of Los Angeles officially deemed October 22 as P-22 Day, providing an opportunity to celebrate the famed cougar who had to cross both the 405 and 101 freeways to make a new home for himself in Griffith Park. This year marks the second annual celebration of the holiday, and Angelenos gathered in Griffith Park to learn about P-22's life and how to help protect L.A.'s wildlife.

Sunday's celebration of P-22 Day featured ranger-led walks, urban garden installations, food, music, and more. It also featured plenty of photo opportunities to pose with a life-size cut-out of P-22 himself. Perhaps Madame Tussaud's in Hollywood should invest in a P-22 wax sculpture next.

The day comes at the end of Urban Wildlife Week, which is a week-long wildlife education program that offers in-school education, documentary screenings, and a four-day, 50-mile hike that traces the same path P-22 took to get to Griffith Park. Beth Pratt-Bergstrom, California Director of the National Wildlife Federation, told Modern Hiker that the week is also meant to draw more attention to the Liberty Wildlife Crossing. The crossing, which has been recommended for years, recently moved forward after Caltrans released an environmental assessment of the project. The crossing would be the first major wildlife crossing built in California. It would "help reduce wildlife mortality, ease animal movement across habitats, and allow for the exchange of genetic material," according to Caltrans.

As incredible as P-22's journey was, the lack of an overpass like the Liberty Wildlife Crossing means he is isolated from fellow mountain lions and the majority of his habitat. One of his cougar friends P-32 attempted the same journey in 2015 but died on the way, according to KPCC. An overpass would mitigate the potential for similar deaths in the future.