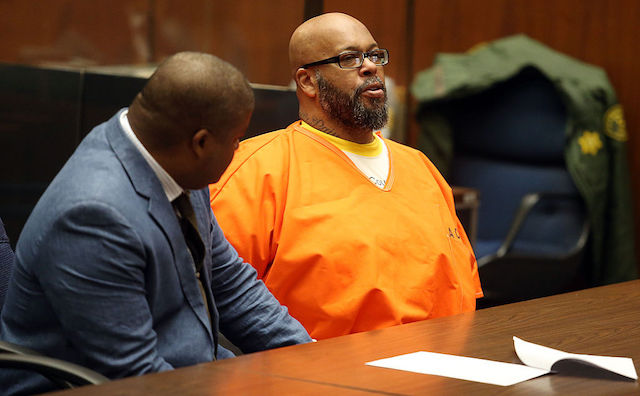 Suge Knight in court with his attorney. He is currently facing charges of murder and attempted murder. (Photo by Frederick M. Brown/Getty Images)

Marion 'Suge' Knight allegedly made several terrifying threats to Straight Outta Compton director F. Gary Gray during the film's shooting, according to court records obtained by the L.A. Times. Among the several threats was a text message that read "I will see u in person … u have kids just like me so let's play hardball."

Knight was indicted and arraigned for these alleged threats earlier this year, but the extent of the threats remained under wraps until Friday. According to the transcript of the indictment, prosecutors outlined several other alleged calls Gray received from Knight while on the set of Straight Outta Compton that left Gray extremely shaken and frightened. The records also show text messages Gary received, one of which referenced Knight's membership in the Mob Piru set of the Bloods street gang. "I'm a Blood criminal street gang member from the city of Compton … Time has arrived Faith in God keep ppl safe. The Devil's Money can't save No 1," read one text to Gray, according to the Times.

Gray was called to testify on the nature of these threats during the grand jury hearing in February, but consistently evaded answers or claimed to have forgotten any phone calls or text messages. At the time, Deputy Dist. Atty. Cynthia Barnes told the grand Jury that Gray was willingly perjuring himself "because he's that afraid," according to the records obtained by the Times. Despite Gray's minimal testimony, the grand jury went ahead with indicting Knight on a charge of threatening Gray's life.

Other testimonies revealed in the court documents include that of Los Angeles Police Det. Jason Cook, who responded on the Straight Outta Compton set the day Gary received the threats. According to Cook, Gary said Knight "threatened his family and members of the film crew and that he was angry over his portrayal."

Knight pleaded not guilty to the charges at his arraignment in August, according to the New York Times.

Knight is already standing trial for murder and attempted murder after running over two men at a Compton burger stand in 2015. He has claimed to have been acting in self-defense, accusing Dr. Dre of paying a hitman to have him killed.