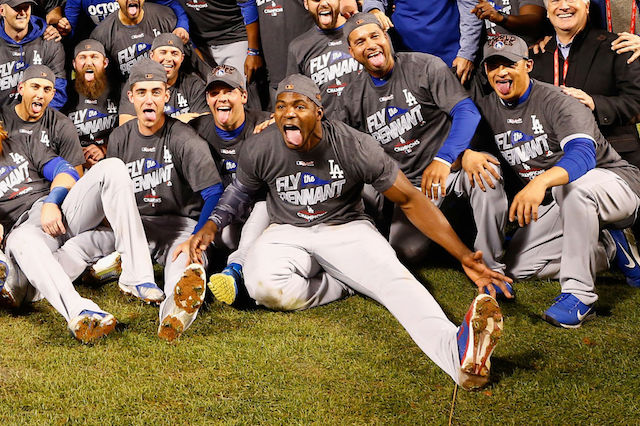 The Dodgers are in the World Series for the first time since 1988! The last time they went, Michael Dukakis was the Democratic presidential candidate, the first computer worm was about to make its way through the internet, and both Stephen Curry and Kevin Durant had just been welcomed to the world.

Eric Stephen, writer at the True Blue LA blog, notes that the Dodgers’ NL pennant comes after a drought that's unusually long by the team’s standards. Prior to the ‘90s, the team had won the pennant at least once every decade since moving to L.A. from Brooklyn in 1958:

Seeing as how this World Series carries extra weight for the team, it stands to reason that you’d like to be at Dodger Stadium to witness history in the making. And, as a logical person, you assume that tickets are already sold out. Which means you’re taking a look at your bank account and gauging how much you’re willing to fork out on the secondary market. How much will it cost you, exactly?

As of Friday morning that total stands at about $980 each ticket, at least, on StubHub for Game 1 at Dodger Stadium. And these are for seats in the upper reserves by the right foul pole, from where even Justin Turner’s glowing red beard will be hard to discern. Going down a level to the preferred loge, the prices leap to about $1,200. Seats out in the pavilion are similarly in the “low” one-thousands. And if you’re truly reckless and feel like getting up to field level, that’ll cost you at least $3,500, with some seats behind home plate going for more than $12,500.

It seems that, for comedian Paul F. Tompkins‏, money is no object:

But hey, it’s not all that bad when you compare it to one million dollars, which is how much some tickets are apparently going for at Yankee Stadium (and the Yankees don’t even know yet if they’re going to the World Series; they’re still battling it out with the Houston Astros).

So, unless your pockets run pretty deep, it looks likely that you’ll be watching the World Series from your favorite bar. The games will be televised on Fox—here are the schedules for the broadcast: