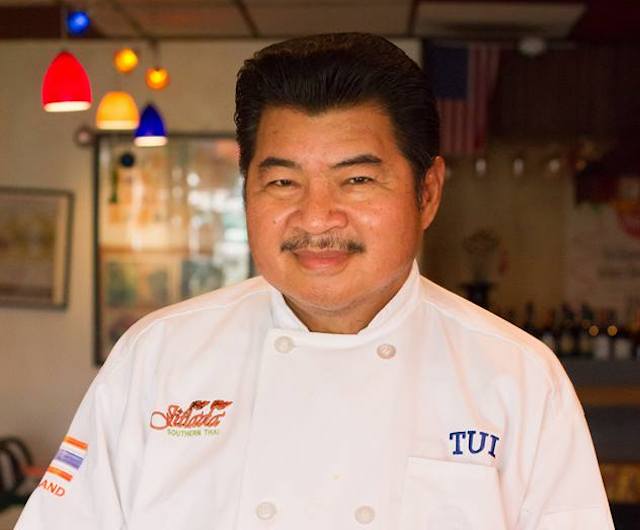 Sungkamee had been the chef of Jitlada since 2006, when he and his sister Jazz Singsanong acquired the restaurant. In reopening the restaurant, which was a neighborhood staple in the late 70s and early 80s, Singsanong was responsible for front of house while Sungkamee revamped the kitchen. He introduced a section of Southern Thai dishes to the menu (which was initially only written out in Thai) and developed a name for himself as a master of heat and spice. "There are many varieties of fire in his food—targeted, diffuse, elusive, persistent—and not just one," wrote Coleman Andrews in a feature for Gourmet magazine in 2008.

His cooking quickly attracted Jonathan Gold to this new iteration of Jitlada, and as Angelenos know, a vouch from the Goldster is almost a sure-fire way to restaurant success. Gold put it on his "99 Essentials List" at L.A. Weekly from 2006 until his last year at the magazine, later bringing his love for the restaurant over to the L.A. Times (the restaurant has been featured on the "101 Best Restaurants" list every year).

How did Gold and Andrews and most Angelenos first discover Sungkamee's cooking in the first place? According to the restaurant's official history, an intrepid traveler from Chicago came to the restaurant in 2006 and was intrigued by its Thai-only section of the menu—so much so that he requested Singsanong go through every dish and explain it to him. He brought the translated version of the menu back to Chicago and posted it to a local food-lovers' blog, raving about the Southern Thai specialties back in L.A. Word got back to L.A., and Jitlada began offering the translated version of the original menu. This section of the menu included Khua kling Phat Lung, a beef curry which Jonathan Gold has called the "spiciest food you can eat in Los Angeles"; crispy catfish salad, which features crispy shredded catfish on a bed of mango salad; and the Dungeness crab in garlic sauce, which is an iconic Thai dish not often found in American Thai restaurants.

Sungkamee was incredibly passionate about his restaurant. "His daughter Sugar said, 'My dad loved Jitlada more than himself,'" Singsanong told the L.A. Times. In an interview from 2015, Singsanong described how Sungkamee would go to markets constantly in search of the freshest ingredients. "When he picks the fish, the fish has to be clear-eyed. The vegetable, it must be heavy, because when it is heavy it is fresh inside," she said. He has also expressed an unerring devotion to his own palate. "It may be very good for you, but not for me. I have to trust myself," he said in the same interview, expressing how he chose not to follow the opinions of others.

Sungkamee and Singsanong were two of 12 siblings growing up in the Nakhon Si Thammarat province in southern Thailand. Sungkamee learned to cook while watching his grandmother make curries, and later watching his parents cook and going to the early morning fish market with his father, according to the Times.

Over the years, Jitlada has been both a Thai Town favorite and city-wide icon. Its clientele has included Matt Groening (who made special Simpsons drawings for the restaurant), Aziz Ansari, Ryan Gosling, and chefs Ludo Lefebvre and Wolfgang Puck.

Singsanong plans to keep the restaurant open in honor of her brother. The restaurant has planned several ceremonies to honor Sungkamee, including a cremation ceremony at Hollywood Forever Cemetery on Sunday. You can follow the restaurant's Facebook or Twitter for updates on planned events.