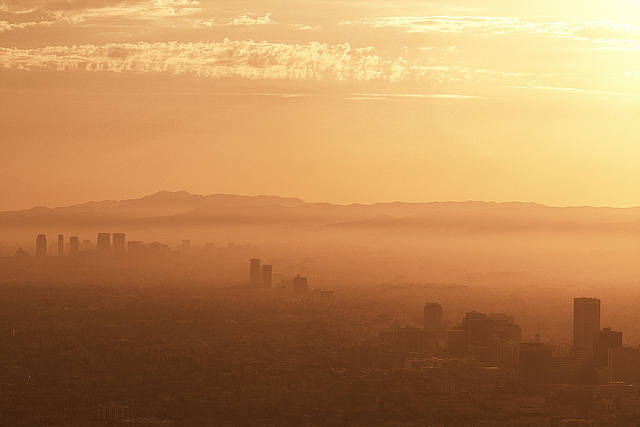 Ah yes, fall. When the scent of foliage fills the air. When you’re given permission to break out that favorite jacket that’s been left hanging in the closet. When empty storefronts are briefly repurposed as Halloween stores selling bizarre costumes. And when triple-digit heat shatters records across the county?

That’s right, it’s about to get hot. As explained by John Dumas, meteorologist with the National Weather Service, the projected combination of Santa Ana winds, a higher-than-normal pressure system, and a lack of sea breezes, will turn much of L.A. County into a scorcher.

The warmup is expect to start on Sunday and peak on Tuesday. Downtown L.A. is forecasted to reach a high of 99 degrees on Monday and 100 on Tuesday. Up in Burbank, it’s slated to climb to 102 on Monday and 103 on Tuesday. And in Pasadena it’ll be 103 and 104, respectively. And thanks to those non-existent sea breezes, even Long Beach will reach daunting highs of 101 on Monday and 102 the following day. “It’s really unusual for us,” Dumas told LAist, noting that the confluence of meteorological events has put us in a spot where desert regions like Lancaster will actually be cooler than much of the county early next week (Lancaster is expected to hit 86 on Monday and 90 on Tuesday).

As for temp records: they’re expected to be broken across the board. Dumas notes that the current records for downtown L.A. on Monday and Tuesday are 98 and 99, respectively. So, if the forecast stands, we’ll see new record highs. Dumas says that records are also expected to be broken in Long Beach, Burbank, Woodland Hills, San Gabriel, and Pasadena, among other areas in the L.A. and Ventura counties. Dumas says that the NWS will be issuing an excessive heat watch that will go from 10 a.m. Monday to 8 p.m. Tuesday. The high temperatures are expected to gradually taper off beginning on Wednesday.

If there’s a bright spot to be found, it’s that the nights are expected to be relatively cool (unlike during summer heat waves, when the day is hot throughout). “The only good news is that it does cool down on evenings during fall,” said Dumas. “That’s the one good thing about the Santa Anas—that they often take place during the fall.”

Another thing of note: the Dodgers will play the first game of the 2017 World Series at home on Tuesday. Between the high prices and the high heat, it looks like you'll be way better off staying at home.