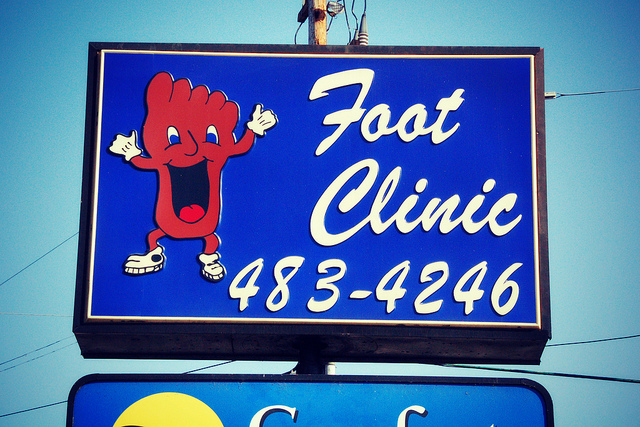 Los Angeles is a city of signs. The Hollywood sign, the Beverly Hills sign, the sign on a business in Hollywood that reads "Life is good! Business is great! People are terrific!" Influential L.A. artist Ed Ruscha created an entire genre of contemporary art around the semantic effect of signage, asking us how words transformed when emblazoned or written out in maple syrup. None of these is our most beloved sign, though. That honor belongs to one sign and one sign only.

I'm talking about, of course, the Happy Foot/Sad Foot sign in Silver Lake. It rotates all day long, never stopping to linger too much in either emotion (we Los Angelenos do not Dwell In The Sad, this isn't New York). It's also honestly an absurd sign. Did the illustrator even know what a foot actually looks like?? A foot *does not* need hands and feet. And the sad foot is sad because his big toe is broken, but the big toe is essentially his hair? Did he get a haircut he didn't like, a la Cassandra Jean's iconic meltdown on America's Next Top Model Cycle 5? It's all absurd and makes no sense, and that's why we all feel a deep possessive need to exalt the sign and protect it at all costs.

The sign also has taken on the role of fortune teller of sorts. When driving past, do you see the happy foot or sad foot first? The answer could affect the outcome of your entire day.

We may never know the sign’s true psyche. What we do know, though, is the sign's role in Los Angeles lore. Let us walk the path of history together.

2004: According to Atlas Obscura, Beck mentioned the sign in an interview with Anthem Magazine. Apparently the musician and his friends lived within viewing distance of the sign.

2007: Jonathan Lethem, the Brooklyn-born novelist who sometimes writes about California and now teaches at Pomona, wrote about the sign in his 2007 novel You Don’t Love Me Yet.


The two images presented not so much a one-or-the-other choice as an eternal marriage of opposites, the emblem of some ancient foot-based philosophical system. This was Lucinda's oracle: one glance to pick out the sad or happy foot, and a coin was flipped, to legislate any decision she'd delegated to the foot god.


(I say this detached from the marvel of seeing the sign immortalized in the novel, but yeesh, Jonathan, take yourself a little more seriously, why don’t you)

2008: The band Eels releases the song ”Sad Foot Sign.” The piano ballad mourns how “the happy side is broken now, it’s gonna be an awful day.” The sign enters into the singer’s life to the point of delineating between truth and lies, hope and despair, and the the knowledge of what it feels like to “really be alive.” Maybe Lethem was right, and it really is a foot-based philosophical system.

2010: The sign briefly breaks down and stops spinning. This was by no means the first or last time such a tragedy occurred, but it was the first time Curbed reported on its health, which indicates the degree to which the sign had reached local importance at the time.

2010: A local blog introduces HaFo SaFo as a possible name for the neighborhood around the sign (basically, the intersection of Sunset Boulevard and Benton Way). For a city of HiFi, NoHo, WeHo, SaMo, all in the region of SoCal, it would make sense to introduce HaFo SaFo into the lexicon (also because when you say it out loud it sounds like a toddler learning to say the name in its entirety).

2011: The sign makes another literary appearance, this time in David Foster Wallace’s posthumous novel The Pale King. Wallace transports the sign to Chicago, so it’s not quite an exact rendition, but he describes a podiatrist sign with “a huge colored outline of a human foot,” according to Salon. The novel’s narrator explains how, "[i]f it stopped with the foot facing our windows, we would take it as a sign and immediately blow off any homework or supposed responsibility we had.”

2013: Local arts organization Machine Project makes a constantly spinning, 3D, online version of the sign. The sign moves from shadow to light at a constant rate despite no visible sun. It’s an eerie simulacrum of the actual sign, and it will live eternal.

2013: Master of None writer Cord Jefferson gets a personal charm of the sign. In an email to LAist, Jefferson explained how he heard of the sign's mythology as soon as he moved to Los Angeles. "I've since driven past that sign thousands of times, and each time I still get a jolt of bliss if I see the happy side first and a pang of fear if I see the sad side first. I'm not generally a superstitious person, but something about that sign makes me stupid," he said. His girlfriend at the time made charms for him, herself, and his mom. "I suppose if I want to overthink it, it represents the duality of life, like how Taoism says we should all try and live "openly with the apparent duality and paradoxical unity” of existence." The sign's philosophical imprint certainly has staying power.

2015: And Pens Press makes Happy Foot/Sad Foot sign pins. The pins no longer appear to be for sale, so both R.I.P. those pins and the enamel pin craze in general.

Angie Cortez, a medical assistant at Sunset Foot Clinic, told LAist that clients have come in to seek treatment "just because they like the sign." Some even come with fan art; "We get patients who bring in stuff they make, like pillows, pins, paper clips. We usually give them to the doctor who takes them home." Despite the number of people who come in looking for a Happy Foot/Sad Foot sign t-shirt, the clinic has no plans to start selling any. Etsy does, though.