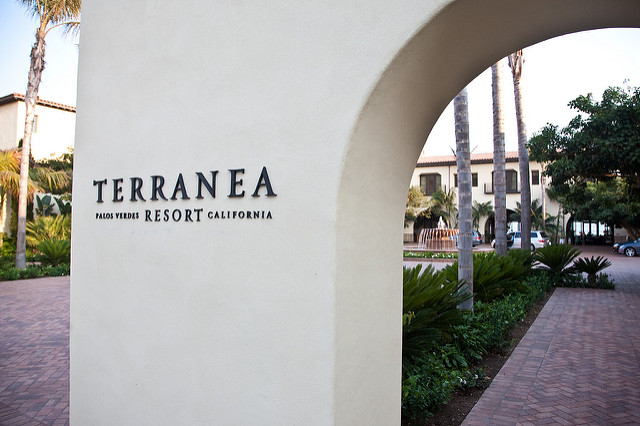 (Photo by Woo via the Creative Commons on Flickr).

With its breathtaking cliffside views, 50,000-square-foot spa, and eight restaurants, the sprawling Terranea Resort has quickly established itself as a major luxury destination since opening in 2009. Located about 30 miles southwest of downtown L.A. in Rancho Palos Verdes, Terranea "feels more Mediterranean than Southern California," according to Condé Nast Traveler, who honored the resort with a Reader's Choice Award and praised its "jewel" of a nine-hole golf course ("every hole has a view").

A new class action wage theft lawsuit filed on behalf of a number of Terranea workers paints a far less pretty picture of life behind the scenes at the 102-acre resort. The lawsuit, which was filed on Thursday, alleges numerous wage and hour violations, the denial of meal and rest breaks, and failure to reimburse employees for work supplies.

"I am proud of the work my coworkers and I do to provide excellent service for our guests and to make this resort successful," Freddy Lovato, a cook who works in a kitchen preparing food for room service, the lobby bar, and Terranea's Sea Beans cafe, said in a statement. "But behind the scenes there are problems with the way we workers are being treated. And that is why I am speaking out."

Lovato alleges that the resort denies him and other workers the 10-minute rest breaks they are legally allowed, saying, "I know the law says that we are supposed to be able to take two ten-minute rest breaks when we work an eight-hour shift. But that is not the reality... The company also does not provide workers like me with the pay it is supposed to provide when we can’t take these breaks.”

The lawsuit also alleges that on "several instances" workers have been told to fabricate their time records to make it appear as if they took a meal break they did not actually take, allegedly so that the resort could "avoid paying Plaintiffs and their co-workers the hour of premium pay that Defendants’ payroll system automatically adds when employees’ time records reflect a missed meal period." According to the suit, employees are also often required to return to work before their 30-minute meal break has finished, but the resort's timekeeping system doesn't allow them to clock back in until the 30 minutes have elapsed, so they are required to work off the clock. The lawsuit also alleges failure to pay overtime premiums.

Workers also claim that Terranea requires kitchen employees to provide their own essential tools, "such as knives, knife guards, sharpening stones, peelers, lemon juicers, zesters, spatulas, kitchen scissors, tweezers, graters, thermometers, and other equipment," and fails to reimburse them for that necessary equipment.

Another major issue raised by the lawsuit involves uncompensated travel time for employees regularly directed by Terranea to park in off-site lots several miles away and take company shuttles to and from the resort.

“Rancho Palos Verdes is such an expensive place. It’s not somewhere we workers can afford to live, so we drive long distances each day to work at the resort," Galen Landsberg, a Terranea cook who lives in Los Angeles, said in a statement. Because of the high cost of living and lack of housing in Rancho Palos Verdes (where the median income is $118,780, according to the U.S. Census Bureau), nearly all of Terranea's workers live outside of the area in more affordable locations throughout Los Angeles and Orange Counties.

"But on top of our long commutes to work, the resort makes us come early to park at remote parking locations and take their shuttles to the resort, so that it can make room for guests to park in its parking lots. We aren’t paid for this time," Landsberg said. Workers allege that the use of company shuttles can add an hour or more to their already lengthy daily commutes. In 2000, the California Supreme Court ruled that workers must be paid for travel time to and from worksites spent in employer-owned vehicles. A spokesperson for Unite Here Local 11, which represents more than 23,000 hotel and restaurant workers, also told LAist that it was common practice for workers to be paid for commute time in official company shuttles.

Employees are all but required to park in these offsite lots on so-called “Temporary Offsite Parking” days (or “TOP days”), when events are scheduled at the resort. During the busy months of April through September, "TOP days regularly comprise three out of seven days a week, typically Friday, Saturday, and Sunday," according to the lawsuit. Not only are employees prohibited from parking on site during TOP days, but the resort allegedly sends security to patrol the adjoining neighborhoods to look for vehicles with Terranea stickers, thereby preventing workers from finding a public parking spot nearby.

"It’s frustrating because we have no other options but to drive to the remote lots and take their shuttles, which can add an hour of unpaid time to our work days. We can’t park on public streets in the neighborhoods surrounding the hotel because Terranea security patrols these areas and the hotel will give you a write-up if they find your car parked there. I can’t take a bus to work because there is no bus that could take me home after my shift. And I can’t take Uber or Lyft because that would eat up a half to two-thirds of my daily wages," Landsberg said.

A spokeswoman for Terranea told the Daily Breeze that they had not yet received a copy of the suit, and that "Terranea Resort strictly adheres to and abides by all labor laws."