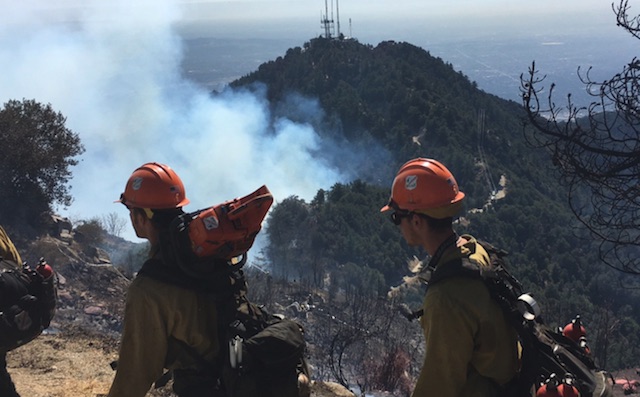 A burned body was discovered late Wednesday near Mt. Wilson Observatory, where firefighters have been battling a fire since Tuesday.

Sergeant Vincent Plair of the L.A. County Sheriff’s Department told KPCC that the body belonged to a male, and that it has been sent to the coroner’s office for identification. According to CBS 2, the body was discovered in the same area of the fire, which has burned 50 acres in total and is now 35 percent contained.

As noted at ABC 7, the body was found by a search and rescue team that was looking for 18-year-old Matthew Huerta. Huerta’s family members say that he’d left his family’s home on Tuesday morning. It was presumed that he went jogging, but he has yet to return home. His sister told ABC 7 that family members discovered a letter in Huerta’s room that indicated he was thinking about hurting himself. Via an app, his phone was traced to the Mt Wilson area, according to KTLA. It has not been determined if the body found by the search team is Huerta's.

In a release from the Los Angeles Police Department, Huerta is described as a Hispanic male with brown hair and brown eyes. He’s 5 feet and 11 inches tall, and weights about 140 pounds. He was last seen wearing a white shirt, black pants and black baseball cap.

People with information about Huerta are asked to contact the LAPD’s Missing Person Unit at (213) 996-1800.