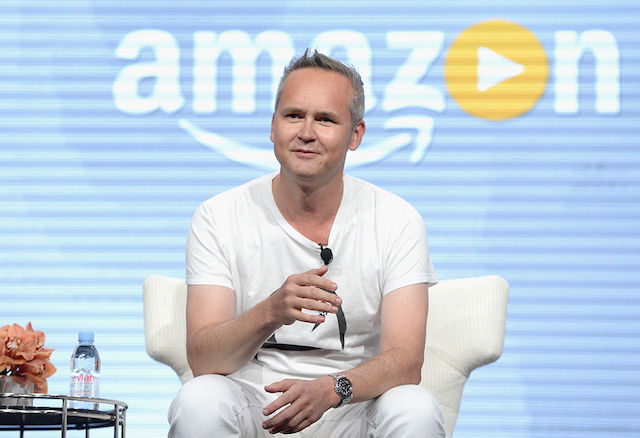 The move comes after Isa Hackett, executive producer on Amazon’s The Man In The High Castle, told the Hollywood Reporter last week that Price had sexually harassed her in 2015 at San Diego’s Comic-Con. Hackett was at the convention to promote Man in the High Castle. She alleges that, on the evening of July 10, 2015, Price joined the show’s cast and Amazon staff for dinner. Price later asked Hackett to join him for an Amazon party later that night. According to Hackett, she was in a cab with Price and Michael Paull, then another top Amazon executive, when Price started to proposition her repeatedly. Price allegedly said “You will love my d—k,” to Hackett in the car. Once they arrived at the party and stepped out of the cab, he shouted “anal sex!” into her ear, said Hackett.

Hackett told THR she reported the incident to Amazon executives, and an outside investigator was brought in to speak with Hackett and other parties involved. Hackett added that, while she never learned of the result of that investigation, Price was never seen again at events promoting her shows (Hackett is also a producer on the upcoming Amazon show Philip K. Dick's Electric Dreams, an anthology series based on her father’s works).

As noted at Deadline, Price’s departure “was fully expected.” He was suspended indefinitely on the same day that the Hollywood Reporter story came out. One source told Deadline that “He would be completely ostracized,” if he stayed on, as there is a call for more scrutiny over sexual harassment in the creative industries—this is in large part due to the recent wave of sexual harassment and sexual assault allegations that have surfaced against producer Harvey Weinstein.

According to Variety, Price joined Amazon in 2004 as the company was on the cusp of starting its video-on-demand service. Under Price, the company launched series such as “Transparent,” “Catastrophe,” and “Mozart in the Jungle.” Albert Cheng, Amazon Studio’s COO, took over as interim boss after Price was suspended.

Deadline says that insiders believe there’s a “consensus that, as Amazon officially moves to finding a replacement for Price, the new head of Amazon Studios would likely be a woman.”

Speaking to THR on how Hollywood can bring about a new environment, Hackett said that it starts at the top. “It is said over and over and sounds like a cliché, but we desperately need more women in leadership positions in Hollywood,” said Hackett. “There’s a culture of harassment [in Hollywood] and we need an infusion of new and diverse leadership, not just including women but gay people, people of color, people with disabilities — people with the full spectrum of life experience.”