Jennifer Lawrence: Female Producer Forced Me To Do 'Nude Line-Up' So I'd Lose Weight 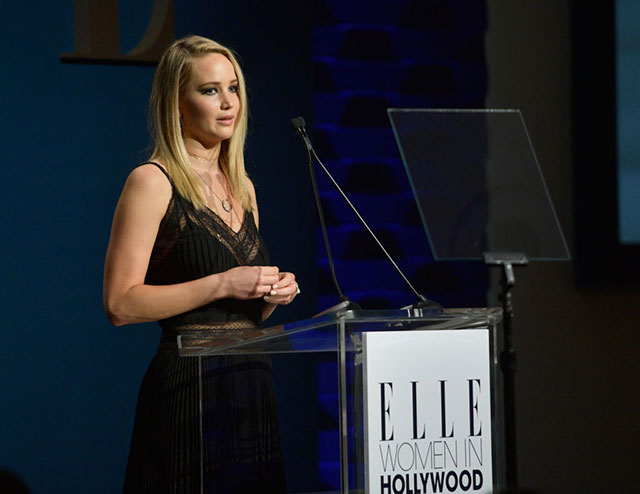 While being honored at Elle magazine's Women in Hollywood celebration, Jennifer Lawrence discussed how she's been demeaned by movie industry figures. "When I was much younger and starting out, I was told by producers of a film to lose 15 pounds in two weeks," she said. Then she added, "Super easy."

Lawrence touched on the Harvey Weinstein sexual harassment scandal, calling it "oddly unifying" to hear about other women's stories. "It's so fundamental to the female experience to be mistreated and feel ashamed of it," she said.

During her anecdote about being told she was too fat, she continued, "One girl before me had already been fired for not losing enough weight fast enough, and during this time a female producer had me do a nude lineup with about five women who were much, much thinner than me. And we all stood side by side with only paste-ons covering our privates."

"After that degrading and humiliating lineup, the female producer told me I should use the naked photos of myself as inspiration for my diet," Lawrence said. "I can laugh now, it's okay."

"I let myself be treated a certain way because I felt like I had to for my career. I was young and walking that fine line of sticking up for myself without being called difficult, which they did call me, but I believe the word they used was 'nightmare,'" she said. Then Lawrence referred to how hard it was to speak out, "I didn't want to be a whistleblower. I didn't want these embarrassing stories talked about in a magazine. I just wanted a career."

Lawrence won an Oscar for her role in the Weinstein Company-produced Silver Linings Playbook. She said last week, "I was deeply disturbed to hear the news about Harvey Weinstein’s behavior. I worked with Harvey five years ago and I did not experience any form of harassment personally, nor did I know about any of these allegations. This kind of abuse is inexcusable and absolutely upsetting. My heart goes out to all of the women affected by these gross actions. And I want to thank them for their bravery to come forward."

Reese Witherspoon was also being honored by Elle, and she revealed how she was sexually assaulted by a director when she was 16, just one of what she said were many sexual harassment and assault incidents she has experienced. From the Hollywood Reporter:

“This has been a really hard week for women in Hollywood, for women all over the world and a lot of situations and a lot of industries that are forced to remember and relive a lot of ugly truths,” Witherspoon said. “I have my own experiences that have come back to me very vividly and I find it really hard to sleep, hard to think, hard to communicate a lot of the feelings that I’ve been having about anxiety, about being honest, the guilt for not speaking up earlier, for not taking action."

She added, "After hearing all the stories these past few days and hearing these brave women speak up tonight about things that we’re kind of told to sweep under the rug and not to talk about, it’s made me want to speak up and speak up loudly because actually I felt less alone this week than I have felt in my entire career. I have just spoken to so many actresses and writers, particularly women, who have had similar experiences and many of them have bravely gone public with their stories. That truth is very encouraging to me and to everyone out there in the world because you can only heal by telling the truth.”

In an interview with Variety, Gretchen Carlson, whose lawsuit against Fox News founder Roger Ailes helped expose numerous sexual harassment complaints about him, explained why it takes time for victims to speak out: "Building courage is a process. It’s not like a light switch that you click on and off. It takes time. Women just want to work and have careers and work in a safe environment. We actually just want it to go away. But whether its 10 minutes or 10 years later, I still commend anyone who comes forward. It takes guts."