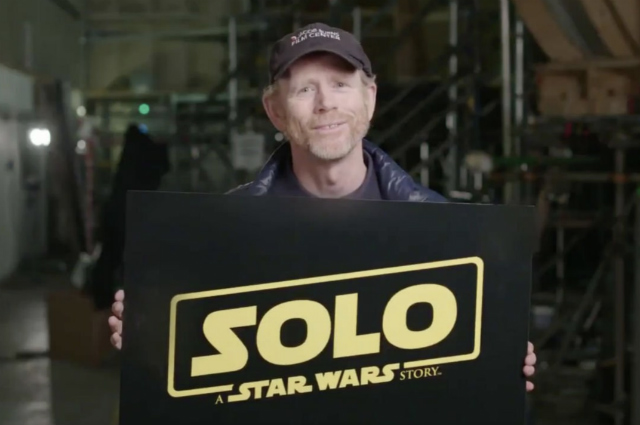 With every grim update, Star Wars fans have grown more and more concerned about the Han Solo spinoff movie. What started out as a questionable idea (did anyone want to see the origins of a perfectly self-contained character who was so clearly defined by the actor who originally played him?!) only got worse once the talented directors Phil Lord and Christopher Miller were kicked off the project due to "creative differences," and Ron Howard was brought in to make the best of the mess. The more hopeful among us might have pointed out that Rogue One had similar behind-the-scenes problems and it turned out fine, but at least that film had a good title.

Today, Howard announced on Twitter that the official title for the film is... Solo: A Star Wars Story. Which is only slightly better than the working titles Star Wars: The Han Solo Story: Kessel Run This Town and Stars Wars: So Low Expectations. But it still broke the first rule of naming a movie: don't let the name rhyme with "Uh Oh," "Ruh Roh" or "Oh Dear God No."

The title is so basic, someone pulled it out of a hat back in February:

Anyway this has been fun, but if I had to bet I'd put my credits on a super basic title like

At least this explains why the (actual) working title for the film was Red Cup.

Everything could have been different.

c'mon, Howard, just give the audience what it wants pic.twitter.com/YyKHsYXF9X

Anyway, the film—which does have a pretty great cast, including Alden Ehrenreich as the titular Solo, Donald Glover as Lando Calrissian, Woody Harrelson as Han's mentor, Emilia Clarke as someone named Kira, the goddess Phoebe Waller-Bridge as a robot, Paul Bettany as a Paul Bettany-ish character and Thandie Newton—will be released on May 25, 2018.

The only Solo I recognize https://t.co/RGlqw3sIl8