Where To Find Spooky And Delicious Halloween-Themed Treats And Drinks Around L.A.

Boo! We live in scary times. At this point, we wouldn't blame denizens of 2017 for questioning whether or not we even need an entire day devoted to invented scares...alas, Halloween is a mere two weeks away. So forget the headlines, your unshakable sense of dread, and every other spooky thing that doesn't involve a fun-sized candy option. Here are some of the best Halloween-themed treats and drinks temporarily on hand (or soon to be available) around Los Angeles. 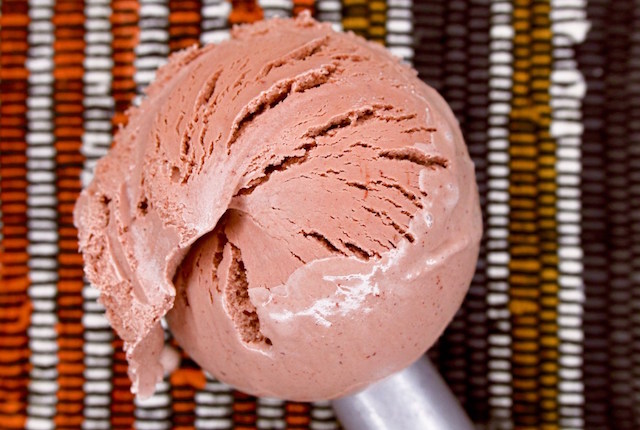 Even with L.A.'s current glut of great ice cream options, Portland-import Salt & Straw stands out for their inventive flavors and artisanal ingredients. The ice creamery's rotating flavors are going Halloween this month, with a "Spooktacular" flavor series on hand at all five of their L.A shops through the 31st. The five temporary Halloween options include a "creepy crawly critters" flavor (grass-green matcha ice cream, spiked with zesty orange, and swarms of dark chocolate covered crickets and coconut toffee-brittle mealworms), a "Dracula’s blood pudding" flavor (warm spices and cream mixed into a real blood pudding, for a spicy, chocolate-y taste), and "the great candycopia" (salted butterscotch ice cream, loaded up with homemade Snickers, Whoppers, Heath bars, and peanut butter cups). The real crickets in the "creepy crawly critters" are from a cricket farm in Oakland.

There are Salt & Straw locations in West Hollywood, Larchmont, the Arts District, Venice, and Studio City. Find the location near you here. The "Spooktacular" flavor series will be available through October 31. 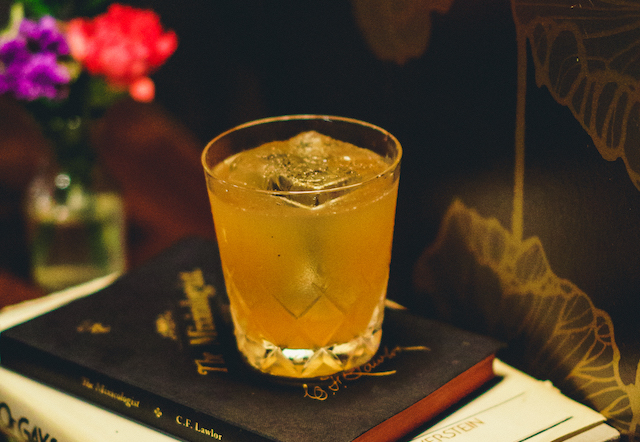 After the success of their limited-run Reese’s Peanut Butter Cup Old Fashioned last fall, Koreatown's The Walker Inn—the clandestine bar hidden inside the Normandie Hotel's Normandie Club— decided to bring it back this year, along with a slew of new seasonally-inspired cocktails. Along with a couple of choice let's-pretend-it's-sweater-weather drinks (think a brown butter apple brandy "apple picking" cocktail, plus spiced pumpkin and "cranberry sauce" options) Walker Inn will be serving a "Halloween candy" cocktail from now through October 31. The drink has bourbon, Reese’s Peanut Butter Cup, cacao, and black salt.

The Walker Inn is located at 3612 W 6th Street in Koreatown (reservations here). 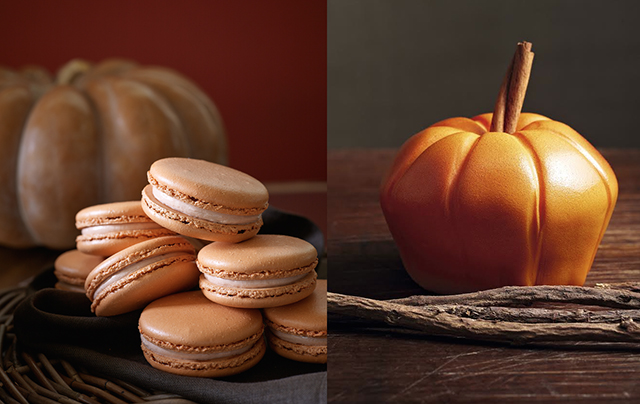 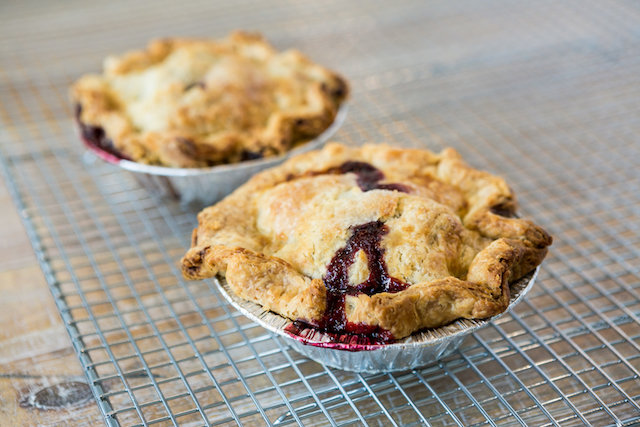 Westsiders searching for the perfect treat to bring to that Halloween party need look no further than Winston Pies, the new pie shop in Brentwood (they opened in the former M Cafe space on San Vicente Blvd. last month). Each pie on Winston's seasonally-driven, rotating menu is handcrafted from scratch and made in small batches. Winston Pies will have four Halloween-themed seasonal pies in stock from October 27 to October 31. Their "creepy cowgirl" (Ecuadorian chocolate with a fudge-like texture and salty oatmeal crust, topped with handmade fresh caramel in the shape of a spider web), "key slime" (tart and creamy key lime pie), "scary cherry" (a homestyle version of a classic cherry pie, made with whole sweet dark cherries), and "pumpkin patch" (pure pumpkin pie) will be available Halloween week by the slice ($7) and as whole pies (11-inch round for $42). 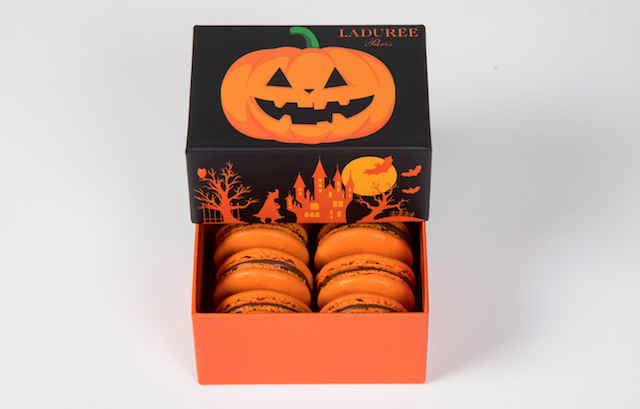 Famed French patisserie Ladurée made its West Coast debut with a two-story boutique and restaurant at the Grove last December, selling their gorgeous trademark macarons along with a full food menu. They opened a second location in Beverly Hills early this year. Starting October 20, the Parisian transplant will be peddling a limited-edition Jack-O-Lantern box of macarons.

Someday, when my grandchildren ask me about what life was like during the waning days of the American Empire, I can tell them about how I presided over a Best Halloween Treats roundup that included not one but two different varieties of high-end Halloween-themed macarons. "Yes," I will tell my sweet progeny as I lovingly adjust their oxygen masks in our climate-controlled pods, but unlike Bouchon's pumpkin-flavored macarons, Ladurée's candy-corn colored macarons were milk chocolate and hazelnut flavored. And that made all the difference. The box of six macarons retails for $24 and will be available at both Ladurée locations while supplies last. 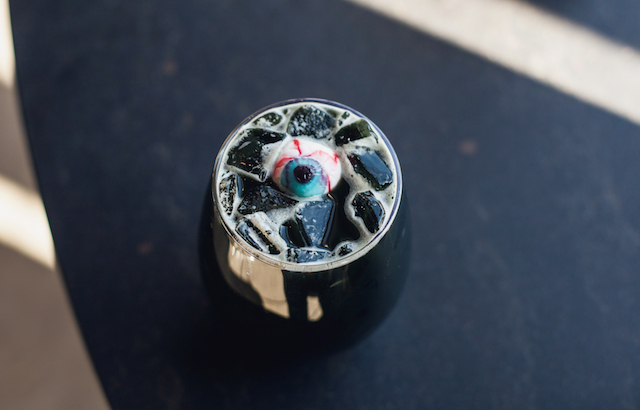 The very lovely American Tea Room, a specialty tea shop/cafe with locations in Beverly Hills and downtown Los Angeles, will be offering a Halloween version of its green tea tereré (a mixture of green and white tea and sweet matcha, layered with lime and orange juice). The Tea Room will take their signature tereré creepy with an infusion of activated charcoal for the pitch-black "scary tereré" tea, adorned with a gummy eyeball. The drink, which will be available starting October 23 at both their L.A. locations, will retail for $6.66. Well played, American Tea Room, we see what you did there. 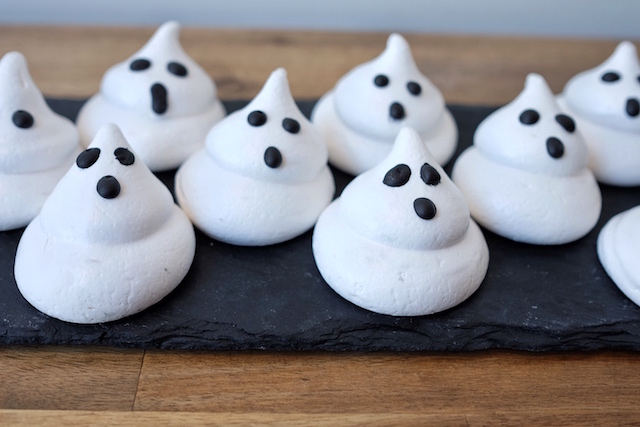 FrankieLucy Bakeshop, the petite but punch-packing Filipino-inspired bakery in Silver Lake, will be turning their signature "unicorn poops" (spoiler: they're really meringues with rainbow sprinkles) ghoulish for Halloween. From now through October 31, FrankieLucy's "Unicorn Poop" will be swapped out for meringue "ghost poop" (same delicious $1 treat, but with spooky ghost decorations instead of the usual multicolor adornments). 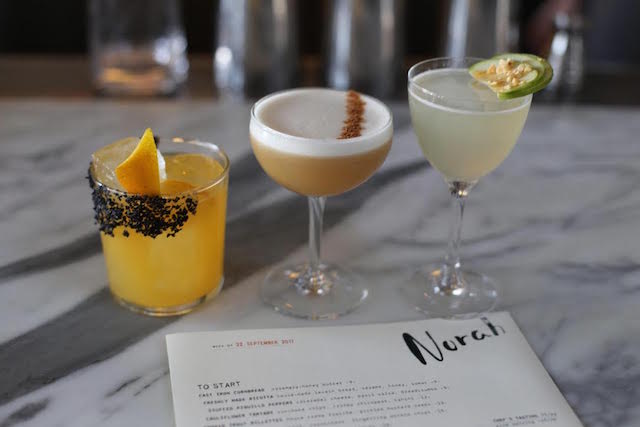 West Hollywood's hip and eclectic Norah restaurant has three Halloween seasonal cocktails on hand, all of which appear to be eminently Instagram-able. Bar Manager Andrew Harbour incorporates fresh ingredients for the Halloween margarita (a mix of tequila, orange, lemon, & basil), pumpkin spice sour (bourbon, lemon, pumpkin spice, & egg whites), and caramel apple martini (vodka, apple, caramel & peanuts). I haven't had a drink in seven years but if I were to start drinking again, I would definitely start with a locally-sourced Halloween margarita! Drinks at Norah can be enjoyed at the restaurant's 24-seat wraparound bar or their new "drinking garden."

Norah is located at 8279 Santa Monica Boulevard in West Hollywood. The seasonal drinks will be available through November. (323) 450-4211.