The Revolution Gets Televised In Awesome 'Black Panther' Trailer 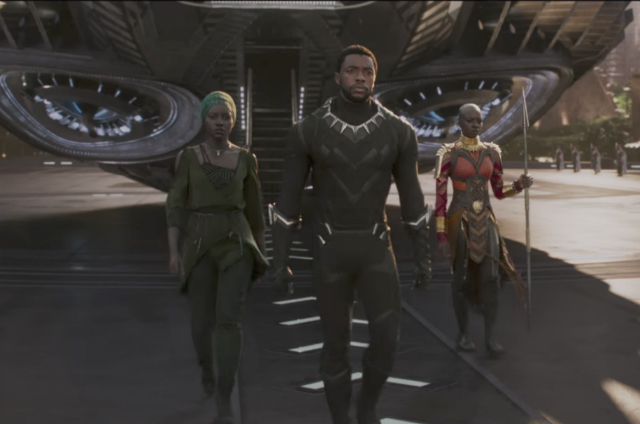 It's a very special time in the Marvel Cinematic Universe's history: more and more, the MCU has been hiring acclaimed and unique directors to take on their various properties, and actually allowing them the space to stamp the movies with their own personalities and quirks. These films generally are stand-alone adventures that aren't trying to set up the next five films in the universe—and there are no better examples of that than Taika Waititi's forthcoming Thor: Ragnarok and Ryan Coogler's Black Panther, which received a brand new trailer this morning that looks like a lot of fun.

Watch above as we get a closer look at Wakanda, the technologically-advanced African nation where T'Challa (played by Chadwick Boseman) rules. There's the villainous Erik Killmonger (Michael B. Jordan) and Ulysses Klaue (Andy Serkis), T'Challa's trusted guards the Dora Milaje (including Lupita Nyong'o and Danai Gurira), ally Everett Ross (Martin Freeman), and Queen Angela Bassett, among others. And it's all soundtracked by a mash-up of Vince Staples and Gil Scott-Heron.

Bringing a brand new #BlackPanther poster to you 1st! We hit theaters Feb 16, but you can check out the new trailer from @marvelstudios NOW. pic.twitter.com/KFbA9A9cG8

If Michael B. Jordan's character looks strangely familiar to you, this may be why:

Can't wait for BLACK PANTHER because Michael B Jordan is playing the most terrifying Marvel villain yet: Your college boyfriend pic.twitter.com/eQDTFRgiBF

The film will be released February 9th, 2018, which is basically right around the corner. And in case you missed it, watch the previous teaser trailer below: