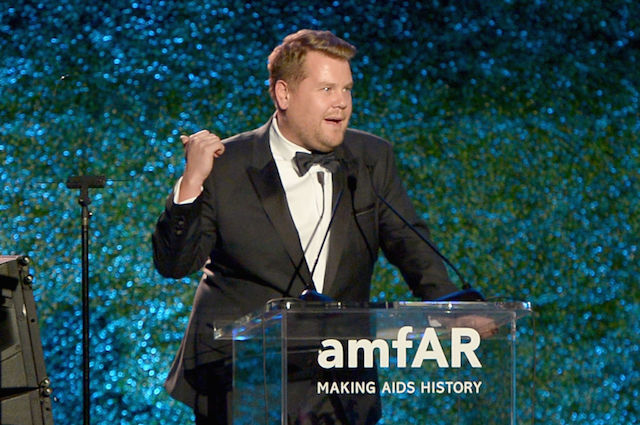 James Corden on stage at the amfAR Gala. (Photo by Charley Gallay/Getty Images)

Updated 1:24 p.m.: James Corden has apologized on Twitter for his jokes at the amfAR Gala on Friday night, which appeared to make light of the accusations of sexual assault and harassment against Harvey Weinstein.

To be clear, sexual assault is no laughing matter. I was not trying to make light of Harvey’s inexcusable behavior, (1/2)

but to shame him, the abuser, not his victims. I am truly sorry for anyone offended, that was never my intention. (2/2)

Celebrities are criticizing James Corden for cracking a joke about Harvey Weinstein in front of the star-studded audience at Friday night's gala for The Foundation for AIDS Research (amfAR) in Beverly Hills.

In his opening remarks, Corden said "This is a beautiful room, it’s a beautiful night here in L.A. It’s so beautiful, Harvey Weinstein has already asked tonight up to his hotel to give him a massage," according to Variety. He later joked, “It has been weird this week though, watching Harvey Weinstein in hot water. Ask any of the women who watched him take a bath.” The jokes were met with audible groans from the audience, according to BBC. Weinstein is currently embroiled in scandal as he faces an enormous number of accusations of sexual harassment and sexual assault.

Asia Argento, one of the women who has accused Weinstein of sexual harassment, took to Twitter to call Corden a "pig" and shame those who laughed at his jokes.

Shame on this pig and everyone who grunted with him #amfARLosAngeles https://t.co/0SujRNCzd9

Anthony Bourdain spoke up as well, criticizing Corden for making light of a serious number of allegations.

He also continued the conversation by calling out the prevalence of male-on-male sexual assault in professional kitchens.

There certainly was when I was just starting out. It was like prison. https://t.co/N47Gg5rh25

Rose McGowan, another one of the women who has spoken up about alleged assault at the hands of Weinstein, criticized Corden as well.

Journalist Rossalyn Warren points out a history of apparent friendship between Corden and Weinstein.

James Corden has benefitted from, and appears to have a friendship with, Weinstein. He chose to make jokes instead of publicly condemn him.

Celebrities like Julia Roberts and Tom Hanks were in attendance at the amfAR gala on Friday. Weinstein was expelled from the Motion Picture Academy on Saturday.