Sculpture At Hollywood & Highland Removed In Response To Weinstein Scandal 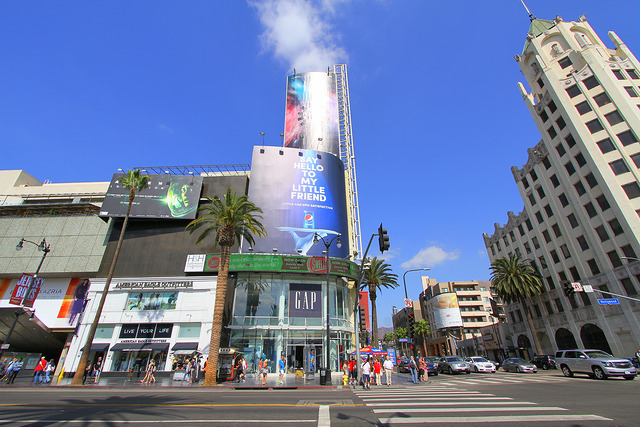 A fiberglass sculpture of a daybed at the Hollywood & Highland shopping center has been removed in response to the growing list of sexual harassment and sexual assault allegations within the entertainment industry. The sculpture was part of Erika Rothenberg's "Road to Hollywood" public art installation, and many took it to represent the famous "casting couch" as one part of the path to Hollywood success. The "casting couch" trope has long been associated with exchanging rape and/or sexual favors for acting roles.

The L.A. Times confirmed the statue has been removed. It is now covered in blue tarp and set aside. Hollywood & Highland management told the Times "in light of current events we have deemed this component of ‘The Road to Hollywood’ to be insensitive and it has been removed from public display."

The "Road to Hollywood" art installation is a mosaic path that goes from the Hollywood Boulevard entrance of the shopping center to a patio that looks out over Highland Avenue. The path includes tiles with "succinct stor[ies] of why an anonymous actor, studio hand or other worker in the industry chose to leave their home and head west," as described by the L.A. Times. The couch sculpture is at the very end of the installation, and often tourists and visitors will sit on it (it reportedly had a great view of the Hollywood sign).

The feminist blog Shakesville posted about the couch earlier this week, and the writer claims to have called Hollywood & Highland management multiple times about removing the couch.

This is a real thing in the world—but it shouldn't be: The Casting Couch statue for tourists at Hollywood & Highland https://t.co/jPhwYriZXu pic.twitter.com/vkP2Eh1oAT

The popular local Facebook page Hidden Los Angeles posted about the couch as well. In the post, the writer points out "The Famous Casting Couch" and cites some of the stories on the "Road to Hollywood" mosaic path, including one where a Hollywood mogul tells a girl she's "too fat" and one where a girl quits a job because of a sexually inappropriate boss.

After the removal, a Twitter user got a snapshot of the spot where the couch used to be on display.

Well guess what? The casting couch at Hollywood & Highland has been removed. pic.twitter.com/jmmFAZPgQp

Hollywood & Highland management was not available for comment on whether the social media and online calls for removal had a direct influence on the decision to take down the sculpture.

The removal comes in the wake of Harvey Weinstein's growing list of sexual assault and harassment allegations, which has also prompted other alleged victims of sexual harassment to speak up about their experience with figures like Oliver Stone and The Gaslamp Killer.