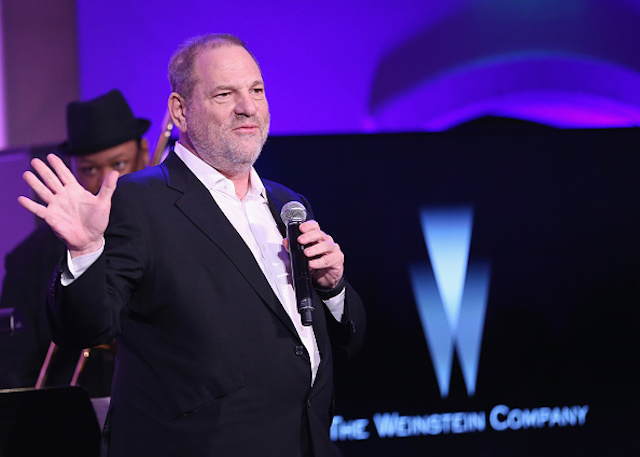 Weinstein at his company's Pre-Oscar Dinner in 2017. (Photo by Rich Polk/Getty Images for The Weinstein Company)

The Academy of Motion Pictures Arts and Sciences voted Saturday to remove Harvey Weinstein from its ranks following the growing list of sexual assault and harassment accusations against the embattled film producer.

The Academy's board of governors, which consists of 54 prominent industry figures like Steven Spielberg and Whoopi Goldberg, voted in an emergency meeting Saturday morning, according to Deadline. The Academy released a statement following the decision to remove Weinstein from the organization:


We do so not simply to separate ourselves from someone who does not merit the respect of his colleagues but also to send a message that the era of willful ignorance and shameful complicity in sexually predatory behavior and workplace harassment in our industry is over. What's at issue here is a deeply troubling problem that has no place in our society. The Board continues to work to establish ethical standards of conduct that all Academy members will be expected to exemplify.

The Academy's bylaws state "member of the Academy may be suspended or expelled for cause by the Board of Governors. Expulsion or suspension as herein provided for shall require the affirmative vote of not less than two-thirds of all the Governors." According to the NY Times, the vote was “well in excess of the required two-thirds majority.”

This decision is unprecedented in the Academy. When the meeting to vote on Weinstein's status was announced earlier this week, Pete Hammond at Deadline pointed out that Roman Polanski and Mel Gibson still have their memberships. Polanski has been accused of sexual assault by four women, and has been living in Europe since 1979, when he was set to face sentencing for the rape of Samantha Geimer. Mel Gibson went on an anti-semitic tirade in 2006 and became an industry pariah, but maintained his Academy membership. He has now returned to good standing within the community, having directed the critically-acclaimed Hacksaw Ridge in 2016.

The Academy decision to expel Weinstein comes on the heels of the National Organization for Women's call to rescind Weinstein's Academy membership. The L.A. Times points out that the Academy's board includes 21 women and its chief executive, Dawn Hudson, is a woman. This reflects the Academy's increasing desire to diversify its ranks; this summer, it invited 774 new members, 39% of which were women and 30% of which were people of color.

Earlier this week, the British Academy of Film and Television Arts suspended Weinstein's membership from the organization.

Weinstein gained his membership to the Academy after winning the Best Picture Oscar for Shakespeare in Love in 1998.