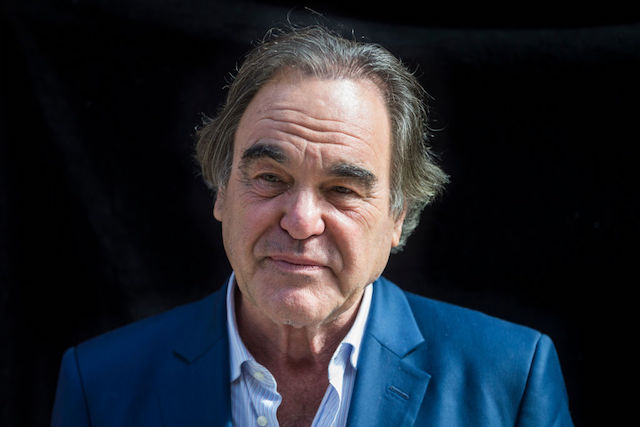 [Update 1:15p.m.: The story has been updated to reflect that Carrie Patricia Stevens has taken down her Facebook post. It is also updated with Patricia Arquette's tweets.]

A former Playboy model accused director Oliver Stone of sexual harassment Thursday, saying he groped her at a party in the ‘90s. She described the alleged incident after Stone made comments defending producer Harvey Weinstein, who is facing an avalanche of sexual harassment and sexual assault allegations.

Carrie Patricia Stevens, who was Playboy’s Playmate of the Month in June 1997 and had acted in a number of films, said in a (now deleted) Facebook post that Stone had grabbed her breast at a party when she was 22 years old (she is now 48, reports Variety). "I was only 22 years old," Stevens wrote, according to Refinery29. "Oliver walked past me & grabbed my boob as he waltzed out the front door of a party. I still remember the cocky grin on his face like he got away with something."

Stevens further elaborated on the incident to NY Daily News, saying that the party took place at producer Ted Field’s home, and that it was held in Stone’s honor. "That's what's going on in Hollywood. That's why things have to change. He's Oliver Stone. Nobody's going to say anything,” Stevens added.

Stevens’ Facebook post came in response to a Hollywood Reporter report that Stone had made comments defending Weinstein at a South Korean film festival. According to the story published on Thursday, Stone is serving as a juror at the Busan International Film Festival, and took part in a panel on Friday morning (local time in South Korea) when he was asked about the long list of sexual misconduct allegations made against Weinstein. "I'm a believer that you wait until this thing gets to trial," Stone said, according to THR. "I believe a man shouldn't be condemned by a vigilante system. It's not easy what he's going through, either. During that period he was a rival. I never did business with him and didn't really know him. I've heard horror stories on everyone in the business, so I'm not going to comment on gossip. I'll wait and see, which is the right thing to do."

Stone later walked back on those comments, claiming in a statement on Friday that he was unaware of the magnitude of the allegations made against Weinstein. “I’ve been traveling for the last couple of days and wasn’t aware of all the women who came out to support the original story in the New York Times,” read the statement, according to Variety. “After looking at what has been reported in many publications over the last couple of days, I’m appalled and commend the courage of the women who’ve stepped forward to report sexual abuse or rape.”

The list of sexual misconduct allegations against Weinstein has been growing ever since the New York Times published last week an article that mapped a history of sexual harassment accusations made against the producer. Actresses Gwyneth Paltrow, Angelina Jolie, and Cara Delevingne are among the women who have publicly stated that the producer had sexually harassed them. A later New Yorker piece reported that several women (including actress Asia Argento) have accused Weinstein of rape. The claims against Weinstein are reportedly now being investigating by police in both London and New York.

Stevens commented Tuesday on the allegations against Weinstein, saying in a Facebook post that she'd "had issues in this business more times than I can count."

On Friday, actress Patricia Arquette recalled on Twitter a "weird" experience she'd had with Stone:

THREAD 1/ Years ago Oliver Stone wanted me to do a movie.We talked about the Material which was very sexual.The meeting was professional.

2/ then I received from him long stem jungle roses. It's not uncommon to receive flowers but something about them felt weird. I ignored it

3/ then his assistant called to make sure it got them. I thanked them. He then invited me to a screening of Natual Born Killers.

4/ He said "Why did you bring him?" I said "Why is it a problem I brought him? It shouldn't be a problem. Think about THAT Oliver."

5/ anyway never heard about the movie again & didn't care to.

Representatives for Stone have not responded to a request for comment.