Jon & Vinny's Is Expanding To Brentwood 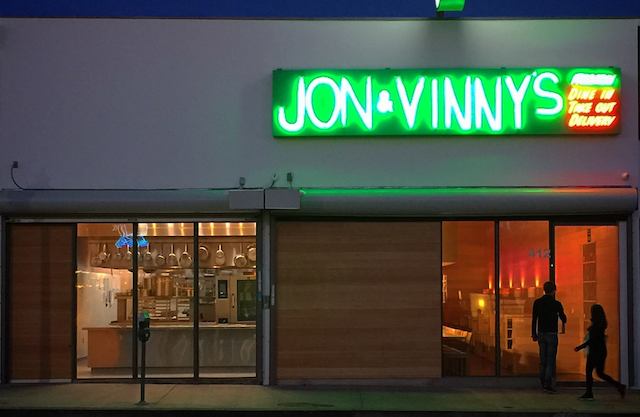 Jon & Vinny's, the casual Italian spot of interminable wait times and impossible reservations in the heart of Fairfax, is headed to Brentwood.

Eater reports the restaurant will take over Early World Restaurant on San Vicente Boulevard. Early World is still open, so Jon & Vinny's won't enter the space for construction and build-out until Early World's lease agreement ends. Eater predicts this means the new restaurant will open in Summer 2018 at the earliest.

Jon & Vinny's is the busiest of Jon Shook and Vinny Dotolo's restaurants, which include the now-iconic Animal, Son of a Gun, and Petit Trois (their partnership with chef Ludo Lefebvre). The menu at Jon and Vinny's is far more casual than those at Shook and Dotolo's other restaurants—it consists of pizza, pastas, and a very solid daily brunch— and is located on ever-busy Fairfax. The restaurant has drawn a wide range of local denizens ever since it opened. It's common to see a dinner meeting of Hollywood executives next to a table of L.A. hip kids.

It's unclear whether the new location will also be designed by architect Jeff Guga, who is responsible for the restaurant's angular booths and light wood aesthetic.

Eater reports the restaurant will also bring along another location of Helen's Wines. The popular wine shop from wine director Helen Johannesen currently occupies the space behind Jon & Vinny's on Fairfax. It offers bottles to purchase on site, as well as a wine-delivery subscription.

Brentwood is slowly turning into a major pizza center for Los Angeles. Pizzana, the recently-opened pizza mecca from chef Daniele Uditi, is located a quarter-mile down the street from the future Jon & Vinny's location.

Jon & Vinny's will be located at 11938 San Vicente Blvd. in Brentwood.