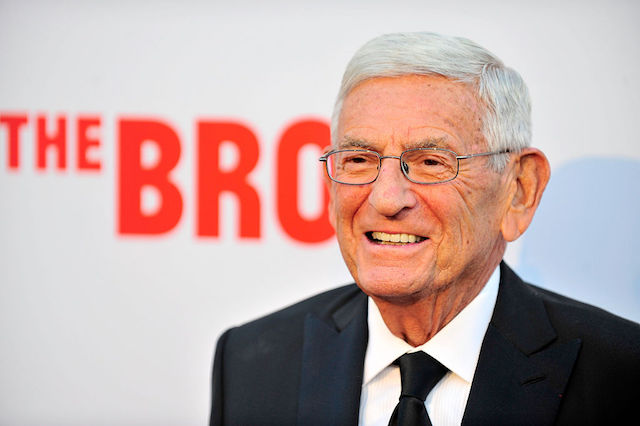 Eli Broad, billionaire Los Angeles patron, is retiring from his philanthropy. The Broad Foundations have invested billions of dollars into scientific research, the public education system, and platforms for art in Los Angeles, most famously the Broad Museum downtown, since 1967. He started working with his philanthropy full-time in 1999, when he stepped down as CEO from the retirement savings company SunAmerica.

Broad told the New York Times he was retiring, saying "I am just tired. I want to spend more time with my family. Catch up on my reading." He mentioned the decision comes after weeks of discussion with his wife, Edythe, who has urged him to retire for a long time.

Broad was diagnosed with prostate cancer fifteen years ago, but it is in remission, and he told the Times that his health was not a factor in his decision to retire. He has also been transferring power for awhile. He picked Gerun Riley as the new president of the foundation in 2016, and he recently added four people to the board of the Broad.

The Broad Foundation does not have a statement at this time, but confirmed Eli Broad's retirement to LAist.

Eli Broad's influence is most visible on the resurgence of L.A.'s downtown. When funding stalled for the Walt Disney Concert Hall, Broad stepped in so construction could continue. When MOCA's future was unstable in 2008, Broad donated $15 million, and donated an extra $3 million a year until 2013, when he shifted focus, somewhat controversially, to the opening of his own museum across the street. The Broad Museum opened to fanfare and has since turned into one of a blockbuster art site.

His philanthropy efforts, while robust, have not always had a positive response. Outside the Broad in 2015, hundreds of teachers protested his support for charter schools, claiming it was hurting L.A.'s public school system. In the 1990s, in an effort to build an endowment for the Hammer after its oil magnate founder died, he orchestrated the sale of the museum's prized Da Vinci illustrated manuscript.

“Los Angeles is now the contemporary art capital of the world,” Broad told the New York Times. “We have emerged as one of the four major cultural capitals of the world, together with London, New York and Paris.”