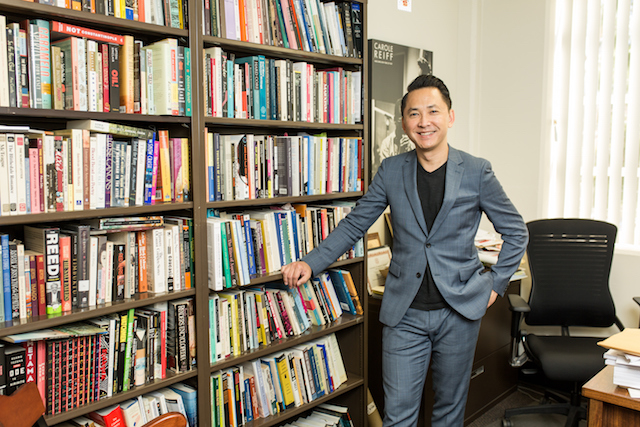 The MacArthur Foundation has anounced the 2017 winners of its annual "genius" grant, and out of twenty-four recipients, three of them—writer Viet Thanh Nguyen, painter Njideka Akunyili Crosby and opera director and producer Yuval Sharon—are based in Los Angeles. Not too shabby for the City of Angels.

Fittingly for one of America's most diverse cities, the three L.A.-based MacArthur fellows—who will receive a no-strings-attached $625,000 grant over five years—all represent international backgrounds. Nguyen, a Vietnamese-American fiction writer and cultural critic who is affiliated with USC, won the 2016 Pulitzer Prize for Fiction for his debut novel The Sympathizers. His writing examines the untold stories of the Vietnam War. Nguyen's latest work, the 2017 short-story collection The Refugees, follows the lives of Vietnamese immigrants and their children. Here he is in a Late Night with Seth Meyers interview last February:

Nigerian-born painter Njideka Akunyili Crosby tells the "Afropolitan story" through her mixed-media visual art, which has been exhibited at L.A.'s Hammer Museum. In a Tate museum "TateShots" video in 2016, she discussed "inhabiting multiple spaces" in her art and life.

Opera director Yuval Sharon was raised in Chicago by Israeli-born parents, telling KCET in a 2012 interview that he was "supposed to hate Los Angeles," but after working as assistant director for Achim Freyer's "The Ring" cycle at the L.A. Opera, the city won him over. Sharon founded the Industry, an experimental opera company known for the 2013 “Invisible Cities" opera staged in Union Station, and "Hopscotch," the 2015 opera that was performed in cars driving around Los Angeles. Here's Sharon introducing "Hopscotch":

Two L.A. writers, Maggie Nelson and Josh Kun, made the MacArthur list last year. So, as a city, we can officially declare that we're even more intelligent in 2017.

In addition to the bona fide L.A. residents on the MacArthur "genius" grant list, one New York-based winner—theater artist Taylor Mac—chose L.A. as the location for his most recent work, a Pulitzer-nominated 24-hour-long musical survey that will open in L.A. this March, the L.A. Times reports. Take that, New York.

Okay, fine, in the interest of full disclosure; NYC boasts a whopping five winners on this year's MacArthur list, and it doesn't take a genius grant recipient to know that five is more than three. At least we'll always have In-N-Out.