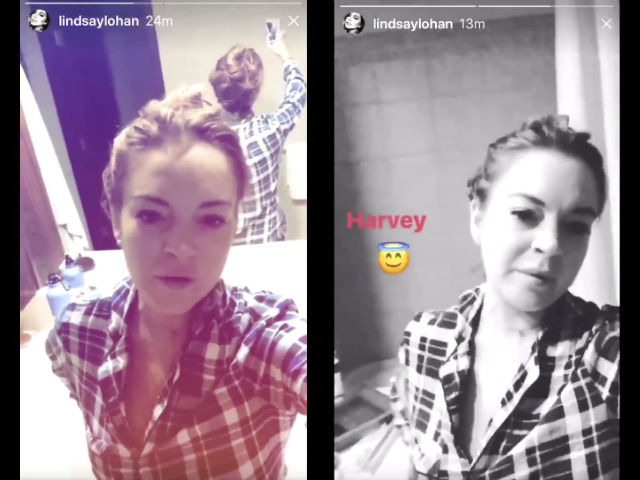 Lindsay Lohan said she felt "very bad" for Harvey Weinstein and implored his wife Georgina Chapman (who is reportedly leaving him) to "be there for her husband" in a pair of now-deleted Instagram videos. Lohan joined an illustrious list of celebrities defending Weinstein including Donna Karan and literally no one else.

"I feel very bad for Harvey Weinstein right now, I don't think it's right what's going on," Lohan said. "I think Georgina needs to take a stand and be there for her husband."

lindsay lohan (and her whack accent) is defending Harvey Weinstein on her insta rn. GOODBYE TO YOU FOREVER. pic.twitter.com/aMzvAOXPYp

"He's never harmed me or did anything to me, we've done several movies together," she continued. Lohan starred in Bobby and Scary Movie 5, both of which were distributed by The Weinstein Company. "I think everyone needs to stop. I think it's wrong. So stand up."

Fashion designer Georgina Chapman announced yesterday that she was leaving Weinstein: "My heart breaks for all the women who have suffered tremendous pain because of these unforgivable actions. I have chosen to leave my husband. Caring for my young children is my first priority and I ask the media for privacy at this time."

While almost no one else has come to Weinstein's defense since the stories broke in The NY Times and The New Yorker, there has been a group of men who have suggested that the real problem is being alone in a room with a woman, as if the environment is the problem and not the people doing the sexual assault/harassment:

If you think being in the same room with a woman makes it hard to avoid raping or harassing her, perhaps you should stay home. Forever. pic.twitter.com/TN17d1asrN