Watch The New 'Star Wars: The Last Jedi' Trailer A Million Times Forever Until The End Of The World 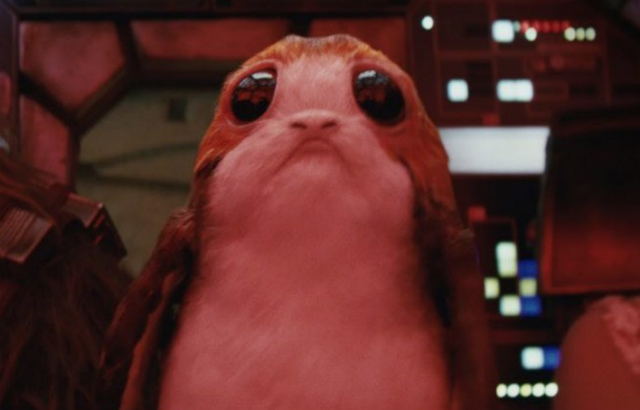 There are a lot of good things about the new Star Wars Episode VIII: The Last Jedi: What Do They Know?: Do They Know Things?: Let's Find Out! trailer: we get to see a fearful Luke training Rey, Kylo Ren faced with agonizing moral decisions during battle, Snoke seemingly fighting Rey, Carrie Fisher's luminescent face, some sort of new ice dog creature, and a lot of The Empire Strikes Back vibes.

But there is only one thing that really, truly matters here: MOTHERF*CKING PORGS.

PORGS RULE EVERYTHING AROUND ME pic.twitter.com/HCWlZ3jejA

If even one Porg dies, I will fucking burn the Star Wars franchise to the ground pic.twitter.com/0l7a2BtFsG

I have watched this little Porg squawk about 70 times now. IT IS HEALING ME. pic.twitter.com/Kl1HF5ykr6

It appears on screen for less than two seconds, but the star of the final trailer for the hotly-anticipated new film is most definitely Chewbacca's new best friend. Porgs have all of BB-8's adorableness and none of his drinking problems; they are what the Ewoks should have been but never had the guts to be; they are the evolutionary corrective to George Lucas force-feeding us Jar-Jar Binks.

THANK YOU THIS IS WHAT I WANTED. They are friends, he is not eating them, they are pals and they go on adventures right?#porg #TheLastJedi pic.twitter.com/idVFsHzEQi

A porg is the Star Wars version of puffins, and are native to Ahch-To, the island where Luke and Rey are training. "They build nests. They can fly. Their babies are called porglets," explained Lucasfilm Story Group's Pablo Hidalgo. "Porgs are cute. You fall into those deep, soulful eyes. I think a lot of people are going to want a porg as a pet." Wait, hold up, go back for a second: their babies are called PORGLETS?!? Please take all my money!!

When you realize #TheLastJedi is really just about Porgs. pic.twitter.com/P61tXvTixO

We need porgs because we have no other way of accessing our emotions in 2017.

oh hey, seems there is a physical manifestation of my soul during a panic attack; it is called a "porg" pic.twitter.com/3ik9A8d5im

Porg Some Sugar On Me pic.twitter.com/zM0gMfq87u

If one of the secondary purposes of these movies is to create creatures so adorable and marketable that whenever they're not on screen, all the other characters and every member of the audience will be asking "Where's Porg?", then the merchandizing department at Disney should sleep soundly tonight knowing it has wildly exceeded its goals.

It has also led to some of the finest art of the 21st century so far:

omg you guys, did you listen to the new Jedi trailer alternate sound track yet? pic.twitter.com/P2hBzAWNrh

This porg is a little unusual, but we'll allow it:

I guess I see what you guys mean about Star Wars leaning too heavily on cute creatures but TBH I'm into it. pic.twitter.com/5vohMC9lYc

Did you know that there already is a porg animated short online that you could have been watching for the last two months:

Hey, on a non-porg related topic, did we ever answer the question who exactly is the last jedi? Was it singular or plural? It's still hard to tell from the trailer, I wonder if there's anyone who can answer it once and for all...