Police, Horses Brought In To Keep Dodgers Out Of Arizona Diamondbacks' Pool 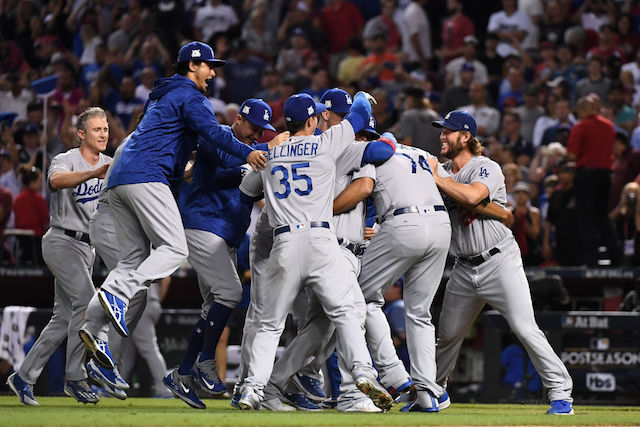 The Dodgers celebrating after their win against the Diamondbacks on Monday. (Photo by Norm Hall/Getty Images)

The Dodgers are heading to their second consecutive National League Championship Series after making quick work of the Arizona Diamondbacks, dispatching them in a three-and-done fashion. On Monday, pitcher Yu Darvish outdueled former Dodger Zack Greinke. Kenley Jansen closed it out with some high heat. Cody Bellinger homered and made a gutsy catch (below) that inspired Deadspin to make comparisons to an Annibale Carracci painting named The Dead Christ Mourned.

The strangest sight in Monday’s win? Horses. Or, specifically, police on horses.

For context, we’d have to go back to 2013, when the Dodgers clinched the NL West title at Chase Field and decided to jump into the Diamondbacks’ pool, which is right by centerfield, presumably for VIPs and whoever won some sweepstakes at a Target. Here’s a video of the guys taking a dip:

The scene led the Diamondbacks camp to throw some expertly crafted shade, notes SB Nation. “I would expect someone to act with a little more class. I highly doubt the New York Yankees would do something like that,” said Willie Bloomquist, then a Diamondbacks infielder. "I could call it disrespectful and classless, but they don't have a beautiful pool at their old park and must have really wanted to see what one was like,” said Diamondbacks President and CEO Derrick Hall (oof).

So, in a very ostentatious display on Monday night, the team brought out mounted police after the game to keep the Dodgers out of the pool.

THE DIAMONDBACKS HAVE COPS ON HORSES GUARDING THE POOL FKFKFLFLFKDHFJJKGKGKFKHLJHFD!!! pic.twitter.com/dOuiie3Hyd

The D-backs made sure the #Dodgers didn't jump into the pool at Chase Field. pic.twitter.com/HVAfL1KsCj

What’s more, the horses were out there for a while. According to this tweet, it wasn’t until past midnight that they were relieved of their duties:

Finally, the horses are in retreat, headed back to the barn.

Really, though, it was all for show. Dodgers Manager Dave Roberts had said prior to the game that the team won’t be donning their swimming trunks. “That won’t happen,” Roberts told USA Today. “This is a completely different team and I think we have bigger goals than to jump into a swimming pool.”

Anyway, the Dodgers will face either the Chicago Cubs or the Washington Nationals in the next round. Neither of those team have a pool sitting out in centerfield, enticing all to stop by for a cool dip. This means we’re unlikely to see horses on the field again.