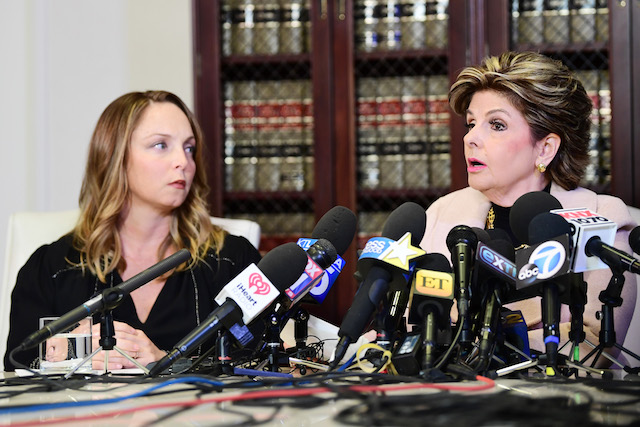 On Tuesday morning, Gloria Allred held a press conference with former actress and screenwriter Louisette Geiss, who alleged that she too was sexually harassed by fallen Hollywood mega mogul Harvey Weinstein. The über-attorney also suggested that Weinstein engage in arbitration or a confidential meditation with his alleged victims, as a means of providing justice for his accusers.

Allred described both as "alternative dispute processes," with the confidential mediation being "essentially a settlement process" and arbitration being a trial of sorts, albeit one with a retired judge presiding over it.

Weinstein was fired from the company he co-founded on Sunday, amid fallout from a bombshell New York Times exposé published Thursday that alleged Weinstein had weathered "decades' worth of sexual harassment accusations" and agreed to financial settlements regarding a number of alleged incidents. Allred's daughter, attorney Lisa Bloom, had previously served as an advisor to Weinstein before abruptly resigning on Saturday. On Tuesday, the New York Times released another bombshell story on Weinstein, with Gwyneth Paltrow and Angelina Jolie adding their names to the long list of women accusing Weinstein of harassment. The New Yorker also released a Weinstein investigation on Tuesday; theirs reported 13 women's stories of allegedly being sexually harassed or assaulted by Weinstein (this number included three alleged rapes, one against Italian actress-director Asia Argento.)

Geiss has appeared on The Drew Carey Show, Two and A Half Men, and The King Of Queens. According to her statement, Geiss first met Weinstein at the Cannes Film Festival, and next saw him at Sundance in 2008. He invited her to a premiere, and asked about her work and a script she had written and was pitching at the festival. She agreed to meet him at the restaurant of the hotel where they were both staying, but they were shortly asked to leave as the restaurant was closing. According to Geiss, he asked her to continue the meeting in his hotel room, where he had an office adjoining the room.

"I will take this meeting with you if you will shake my hand that you will not touch me," she said that she told him, before agreeing to go upstairs. According to her statement, he shook her hand but did not abide by the conditions set forth.

She said she left on the verge of tears, and that the incident caused her to leave the entertainment industry. "I know that I'm not special. I know that this has happened to many women," Geiss said.

According to Allred, the statute of limitations for Geiss to file criminal charges in Utah, the state where the incident allegedly occurred, is four years, and therefore has already expired.