The President Of The LA84 Foundation Talks The 2028 Olympics 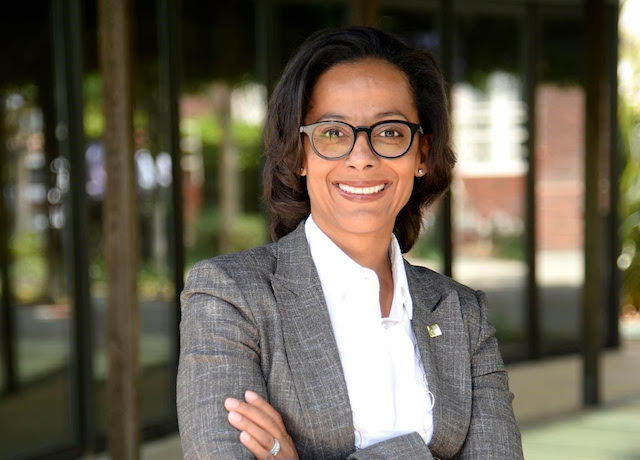 Renata Simril, President and CEO of the LA84 Foundation (Photo courtesy of Future of Cities)

The Olympics are coming to Los Angeles (again), but 2028 is a long way away. Can Los Angeles rise to meet the incredible challenges that face us before the world comes to visit? Will we be able to game the Olympics into another successful civic venture? Or will we be saddled with Olympian ruins and debt like Rio and Athens?

Future of Cities L.A. founder Donna Bojarsky spoke with Renata Simril, President and CEO of the LA84 Foundation, about the bid, the future of Los Angeles, and the 2028 Olympics. Simril is a third generation Angeleno who has worked with the L.A. Times, the Dodgers foundation, and formerly served as Deputy Mayor for Economic Development and Housing in the Hahn Administration. Most recently, she was a key member of the 2028 Olympic Bid Committee. Future of Cities L.A. is a civic initiative and project of Community Partners that aims to reinvigorate the involvement of civic leaders in creating a vibrant, cutting edge future for Los Angeles. Here's an excerpt from their talk. The full interview can be found here.

So what does it mean to be hosting the Olympics again? What does it mean as an organization and what does it mean to you? For me, I'm excited because when I was a teenager my parents couldn't afford tickets to the Games. We didn’t have the kind of economic opportunity when I grew up where we could go and see the Olympics in person. I grew up in Carson, and I can remember riding my bike to watch what was going around where the games were happening, but not actually getting to be there. So for me, the Olympics coming back in 2028 is an opportunity for me to actually be at the games at the opening ceremonies. To actually be at the Coliseum.

In really good seats. One would hope! I hope that things in life keep going well and I can afford good seats. We'll see if Casey (Wasserman, L.A. Olympic Bid Committee president) and Mayor Eric Garcetti take a page out of Peter Ueberroth’s ‘84 playbook, where everybody had to buy tickets because it was the first privately financed bid in '84.

I'm just excited to see and hopefully experience as a city some of what we experienced in '84. It was a coming together. I think taking a page out of what L.A. accomplished in '84, and using that as an organizing principle to really bring people together, can demonstrate what is the best of Los Angeles. I think we can use this sense of unity to provide opportunities for those who haven't had them, very much the same way the LA84 Foundation has done for 33 years since the '84 games. It's really about an Olympics for all of Los Angeles.

I was going to ask you about this organization, the LA84 Foundation. Can you tell us a bit about what you do? In 1984 we had a group of civic-minded leaders who had written into the Olympic bid documents that if there should be a surplus in the budget 40% of that surplus, which was Los Angeles' share would start a youth sports organization. That’s where it started. The LA84 Foundation was created with some iconic civic leaders of our day: Lew Wassermann, Tom Bradley, Peter Ueberroth, Maureen Kindle, Paul Ziffren, John Argue, Yvonne Burke. The purpose was to provide sport opportunities to kids in underserved, under-resourced communities throughout Southern California (not just Los Angeles). So our grant area and our focus is from Santa Barbara to San Diego, where most of the big games were hosted. It was a way to give back to the city, and the communities that took part in hosting an Olympic sport or event. And for 33 years we've had a tremendous impact.

Let's face it though, the L.A. bid was up against a challenge, right? Because this is not the easiest time in international relations. From watching it closely: yes, certainly a challenge. The federal government has to commit to making this a major event and putting federal resources into it from from a security perspective. So certainly it’s a big undertaking.

But I think that the issue with Los Angeles predated our current president. Certainly, our current President has caused the world to look at the United States in a vastly different and not favorable light, and I think what Casey (Wasserman) and the Mayor have done is really talk about what is the best of the United States through the lens of Los Angeles.

Everybody is welcome here. You've got 27 or 28 countries whose Los Angeles population is the largest outside of their home country. I think because we're still a relatively young city we’re able to talk about that on a world stage, and perhaps bring a certain degree of humility to the international stage. People may start to think about Los Angeles and see Los Angeles in a vastly different light.