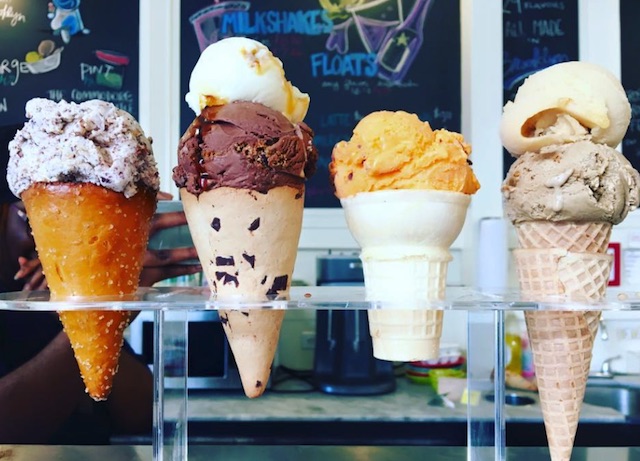 The battle for food dominance between the East Coast and the West Coast is fairly…civil? In fact the prevailing motto seems to be “sharing is caring,” as Eggslut and Sqirl (among other L.A. natives) have made visits out to NYC, and we’ve been graced with the presence of Roberta’s delicious pies.

Now, the coast-to-coast cultural exchange will get another notch, as Brooklyn’s Ample Hills Creamery is slated to set up shop in Los Feliz, according to Eater LA. The ice cream shop is expected to open by Hillhurst and Russell avenues in summer of next year. As noted at Eater, the opening is somewhat curious, as there is already a wide selection of lauded ice cream slingers in the area; nearby offerings include Jeni’s Splendid Ice Creams, McConnell’s, and Churro Borough.

Ample Hills, we should mention, comes highly recommended by our pals out at Gothamist. It has landed on their "Best Ice Cream Shops In NYC" list, where it was praised for its “premium ingredients “ and “incredibly fresh-tasting” ice cream. The shop, not surprisingly, can be eclectic with their flavors. “The Munchies” involves Pretzel-infused ice cream (their description, not ours) that’s also loaded with Ritz crackers, potato chips, and mini M&Ms. And the “Nonna D’s” comes with brown sugar cinnamon ice cream with homemade oatmeal lace cookies. There are also the familiar offerings, like organic strawberry ice cream.

Also, the shop was named after the Walt Whitman poem “Crossing Brooklyn Ferry.” We’re not sure if poetry whets your appetite for ice cream, by why not?

Ample Hills Creamery will be at 1824 Hillhurst Ave., Los Feliz.