Los Angeles recently voted to replace Columbus Day with Indigenous Peoples Day, joining several other cities around the country in an attempt to honor the people on whose land the United States built its empire. The story of L.A.’s birth often goes back to the first pueblo in the area, which became the official Los Angeles settlement in 1781 (as either El Pueblo de Nuestra Senora de los Angeles or El Pueblo de Nuestra Senora la Reyna de los Angeles—historians remain unsure), but the pueblo didn’t arrive in a vaccuum. Settlers didn’t find themselves on empty soil prior to their claim on the area. Whose lives did they upend?

Their influence on the eventual metropolis of Los Angeles extends far beyond their choice of location, though; the forced labor and enslavement of Tongva peoples is what allowed Spanish settlers and missionaries to develop their reach in the first place. When the Spanish arrived in Southern California, they sought fertile land to produce the crops they were hoping to cultivate. This led them to the bountiful San Gabriel Valley (the San Gabriel Mission is credited as the first location of Spanish settlers in the area that became Los Angeles). Craig Torres of the Tongva community, through UCLA’s Mapping Indigenous L.A. project, explains how, prior to Spanish arrival, the San Gabriel Valley consisted of a “concentric circle” of native communities, which the Spanish recognized and exploited—they subsumed inter-connected communities into the Mission system, which was easier for them than accessing isolated communities along the coast (the dual name of Gabrieliño-Tongva comes from forced assimilation at the hands of the San Gabriel missionaries). 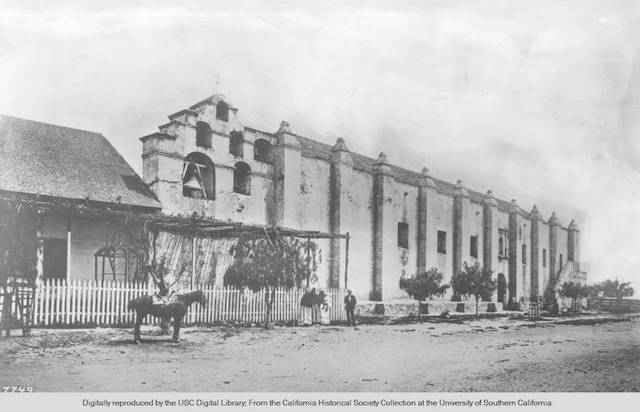 The San Gabriel Mission circa 1870. (Photo via USC Libraries)

Tongva tribal council member Mark Acuña explained to KCET’s Departures how, “In order to accomplish all that mission work, it was on the backs of Indians. There’s no other way to talk about it. We built the 21 missions. We worked the fields.” Junipero Serra was the founding father at many of those 21 missions, including Mission San Gabriel. Serra’s legacy of violence against indigenous peoples of California has led to criticism of his sainthood, as well as vandalism on statues of his likeness around the state.

The forced servitude led the Tongva peoples to revolt against the Mission. In 1785, a Tongva woman named Toypurina was approached by a fellow tribesman named Nicolás José. Toypurina had a reputation as a powerful medicine woman, and José sought her help to kill the mission’s padres. The plan was for her to use her talents to immobilize the Spanish priests while the male warriors killed them, according to KCET. The padres caught wind of the plot, and enacted a counter-plot to imprison the revolters, but Toypurina maintained her harsh stance against the missionaries.

During the subsequent trial, she defended her actions, saying, "I hate the padres and all of you, for living here on my native soil, for trespassing upon the land of my forefathers and despoiling our tribal domains," according to the L.A. Times. Her likeness can now be found in public art around East and South L.A.; her face covers a wall of Ramona Gardens, and a painted interpretation of her face is part of Pacific Standard Time’s LA/LA’s Oaxacan mural project at the Central Library.

What is now downtown also had a large concentration of Tongva peoples because it was originally the site of Yaanga, a large Tongva village. It was far enough out of Mission San Gabriel’s reach, so fewer peoples were forced to convert and work for the padres, but it was close to the original Los Angeles pueblo. As such, the Yaanga-based Tongva peoples were still exploited for manual labor. As the pueblo and early versions of Los Angeles grew, settlers encroached further and further into the Yaanga village. The center of the village was an old sycamore tree called El Aliso; historians place it near what is now an onramp for the 101 freeway, a stone’s throw from Union Station. 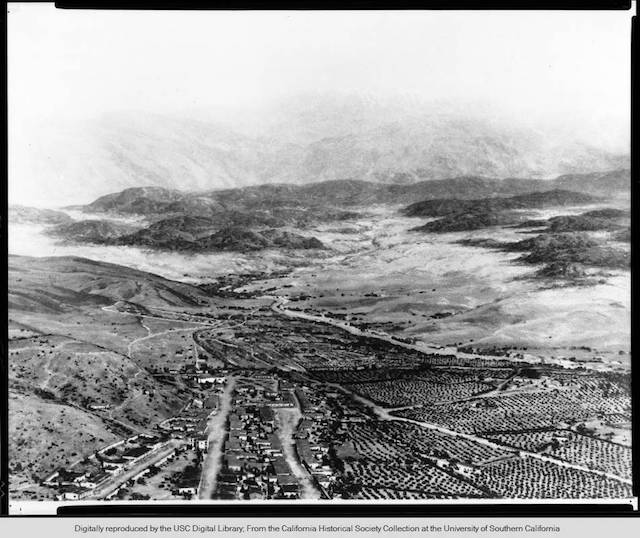 A model of the settlement that encroached on the Tongva village in 1850. (Photo via USC Libraries)

After early settlers had enslaved and assimilated the Tongva peoples, the California Gold Rush and the path to statehood would further decimate their population. The U.S. acquired California in 1848, and a rush of Anglo-Americans came West to seek the reported wealth of the state’s gold. The gold was available in the northern part of the state only, but the rabid industriousness and entitlement of new California settlers made its way to the Southland and affected the Tongva peoples in equal numbers. With the promise of gold, and by association money and power, came the desire to turn California into a state. This led to a disregard of previous treaty practices that had granted land to the peoples, leaving most indigenous populations homeless, according to KCET. Downtown Los Angeles saw a de facto slave market of Tongva labor emerge, where people were imprisoned for being homeless and forced to work off their bail, often paid in liquor instead of cash. Chief red blood Anthony Morales told KCET’s Departures that “as time went on, as society started changing, we needed to blend in with the other ethnic groups in Los Angeles because there was a bounty on us. We had to blend in with different cultures and become part of their societies. We were thought of as the lowest people, ethnically and race-wise.”

Around that time, President Fillmore instructed three U.S. Government Treaty Commissioners to draw up treaties granting land ownership for California indigenous tribes. The treaties were never ratified by the U.S. Senate after California business interests had lobbied against them, and they remained under an “injunction of secrecy” until the turn of the century, according to the Gabrieliño-Tongva Tribe official history. After the treaties came to light, the California Jurisdiction Act of 1928 allowed the California Attorney General to represent the Gabrieliño-Tongva peoples—who were not among the tribes with original treaties— and declared the unratified treaties as grounds for the peoples’ own claims to land. After new legislation in 1946, the Indian Claims Commission could address relief for individual members of the tribe, eventually reaching a settlement in 1972 to award $633 to each living member for the stolen land. Contemporary land claims for the tribe were still unsettled.

Corrections: A previous version of this article stated that SB 1134 gave the Gabrieliño-Tongva Tribe federal recognition. This is incorrect; it is recognized by the State of California, but does not grant it federal land rights. The lack of an original treaty for the Gabrieliño-Tongva tribe was included for added clarity and the term "shaman" was replaced with medicine woman out of respect for the Tongva people's preferred language.