The L.A. Printers Fair is Like Coachella For People Who Love Letterpress 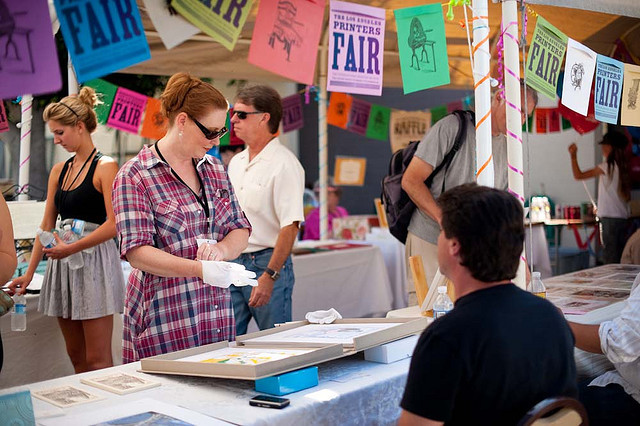 Newspapers and magazines have been shuttering their print editions almost as quickly as you can say “pivot to video,” but print’s not dead quite yet—at least not if the International Printing Museum can help it.

The old-school Carson museum, which boasts one of the world’s largest collections of antique presses, is opening its doors and firing up its presses on Saturday, October 14 for its annual Los Angeles Printers Fair. Now in its 9th year, the fair will host roughly 80 vendors from all over the country, including graphic artists, bookmakers, paper makers, screen printers, letterpress artists, and calligraphers. They’ll be selling everything from custom cards and limited-edition posters to jewelry and accessories made from printing equipment. Essentially, if it involves ink on paper, you’ll probably find it here.

This year’s fair, held under a tent in the museum’s backyard, will honor the silkscreen artist Earl Newman, who will be selling and autographing prints on site. Now based in Oregon, Newman is best known for the psychedelic “Pacific Ocean Park” poster series he designed while living in Venice, Calif. in the 1960s.

The fair is a good excuse to shop for custom paper goods and ink-stained crafts without having to log onto Etsy, but it also offers something else you won’t find anywhere online: the chance to operate centuries-old machinery. The museum will be giving demonstrations using its Columbian printing press, which dates back to the early 19th Century, as well as its reproduction of a Gutenberg printing press. The museum’s theater manager Phil Soinksy says he likes to use the latter machine to print out and distribute pages from the Gutenberg bible, otherwise known as the first book printed and mass produced using movable metal type. The museum also houses a working linotype machine from the turn of the century, and Soinski says he’ll happily print your name on it using hot lead—if you’re into that sort of thing.

“A lot of the antique presses that we have are actually operating. That’s the charm of the museum, they’re not just collecting dust,” says Soinski. “Most museums don’t let you touch an exhibit—we encourage you to operate it.”

Also on display at the museum, which was founded in 1988 by the late printing press collector Ernie Lindner, is an exhibit of printing presses featured in television shows such as Bonanza and The Twilight Zone and movies like Inception. Titled “Printing on the Silver Screen,” the exhibit includes the presses used by Leonardo DiCaprio’s character in the 2011 biopic J. Edgar and Rosario Dawson’s character in the 2008 movie Seven Pounds. Soinski says the museum even trained Dawson, whose character works as a greeting card printer, how to use the press. (She was a natural, he says.)

“You don’t have to be a printer to connect with the place,” says Soinski. At the Los Angeles Printers Fair, he says, there’s also “a lot of storytelling, a lot of fascinating people, and the vendors are incredible.”