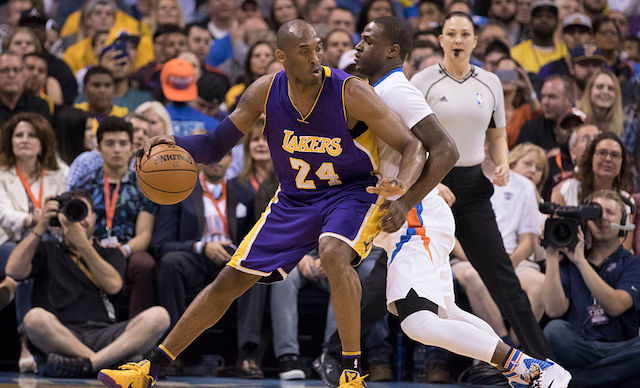 Ex-Laker Kobe Bryant told the Hollywood Reporter’s “Awards Chatter” podcast that, if he were still playing in the NBA, he’d kneel during the national anthem.

The statement came during an interview with podcast host Scott Feinberg. The future hall-of-famer was there to talk about his interest in poetry and animation, among other things. The topic of basketball came up too, of course. And when asked what he'd do before the national anthem, if he were playing a game tonight, Bryant answered with an emphatic, “Kneel.” When he was asked about what he’d like to say to President Trump, he said he’d advise him to, “Focus on serving, not leading.”

This isn’t the first time that Bryant has been openly critical of Trump. When NBA star Stephen Curry declined an invitation to the White House last month (and was subsequently criticized by the president), Bryant was among the number of star athletes who came out in support of Curry. While Lebron James referred to Trump as a “bum” (in a message that has been retweeted a whopping 666,000+ times), Bryant had this to say about the president:

As noted at ESPN, the Lakers have been linking arms during the national anthem in their preseason games. Coach Luke Walton said that the gesture was something that the team had decided on as a whole. He added that "by locking arms, I feel like we are showing that there are issues in this country, and it is a chance for us to raise awareness and still make it a talking point."

The NBA, meanwhile, has reiterated that league rules will require the players to stand during the anthem. When league commissioner Adam Silver was asked at a September news conference about penalties for players who kneel during the anthem, he said, "If that were to happen, we'll deal with it when it happens," reports NBA.com.