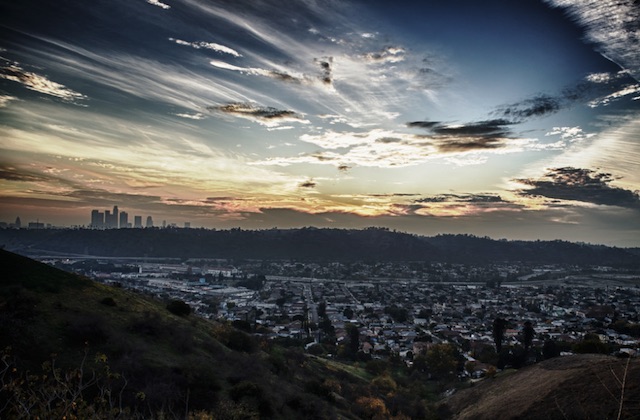 Here in Southern California, the start of fall also means the start of Santa Ana winds season. As such, we may soon be getting a visit from the meteorological phenomenon.

According to Stuart Seto, weather specialist at the National Weather Service, offshore winds will pick up on Friday and go into the weekend, raising temperatures in the process. The downtown L.A. area will see highs in the low 90s, while the Valleys will hit the mid-90s. The winds are expected to hit 15 to 25 mph, with gusts reaching the 40s. Seto says that, while these dry winds have led to a red flag warning for L.A. and Ventura county mountains through 8 p.m. Friday, they are not strong enough to warrant wind advisories and be labeled as Santa Ana winds.

Friday and Saturday’s winds, while more temperate, will have the same effect as the Santa Ana winds, however, as they will blow in hot air and drive up the chances of brush fires, notes the L.A. Times. (The weekend will also experience low humidity at about 7 percent). And Seto notes that the dry winds will remain through the weekend and could build up to Santa Ana winds on Monday and/or Tuesday. He says the NWS is monitoring the winds and will send out advisories if needed.

As far as temperatures go, there’ll actually be a significant fluctuation for the weekend. While the dry winds will continue through Saturday and Sunday, a low pressure system on Sunday will help drive temperatures down. This will instigate a fairly stark change from Saturday to Sunday: downtown L.A. is expected to go from the low 90s to high 70s, for instance, and Pasadena will drop from the mid 90s to low 80s.

Check out the NWS Los Angeles’ Twitter for updates on wind advisories and other meteorological news.