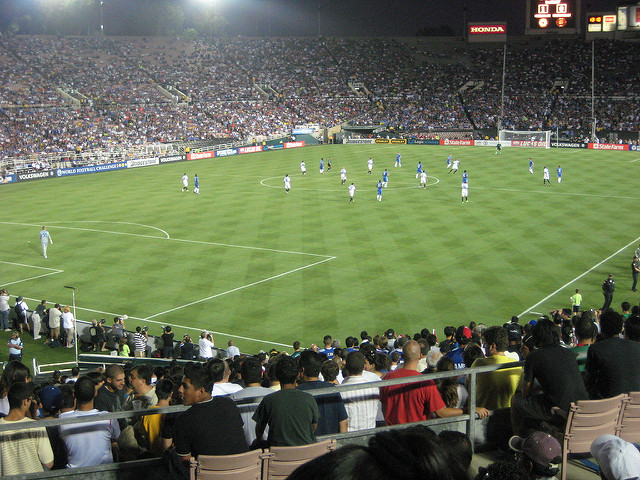 Football clubs Inter Milan and Chelsea play at the Rose Bowl in 2009. (Photo by Ricardo Diaz via the LAist Featured Photos pool on Flickr)

This comes as part of a joint bid put forth by the soccer federations in the U.S., Mexico, and Canada. Basically, all three countries are teaming up to be one big hosting site for the 2026 World Cup (we imagine that the travel would be grueling for players, but whatever). Currently, Morocco is the only other country to have submitted a bid, reports the L.A. Times. The winner is expected to announced in June 2018.

According to Starsandstripes FC, a fan site for the U.S. men’s national team, 25 American cities are currently listed in the bid. They include the usual names like Los Angeles, Chicago, Washington D.C., the Bay Area, and the New York/New Jersey area. Other intriguing contenders include Nashville and Atlanta (which is apparently super into soccer). Meanwhile four cities from Canada and three from Mexico are also included in the list.

According to the Times, those names are expected to be trimmed down to 12 or less in the final process of the bid. And, if the bid goes through, the matches will be played at those 12 or so venues spread across the three countries. This seems kind of insane, but one thing to take into consideration is that FIFA, or the International Federation of Association Football, intends to expand the competition pool to 48 participating nations, which would make the 2026 World Cup the largest in the tournament’s history.

Certainly, if the World Cup does return to L.A., we’ll have a wide number of venues to select from. Aside from favorites like the Rose Bowl and the Coliseum, we’ll also have the upcoming Inglewood stadium that’s slated to host both the Rams and the Chargers. And could Dodger Stadium be a sleeper pick? NYCFC, one of New York’s teams in Major League Soccer, plays at Yankee Stadium, so maybe the idea isn’t quite as outlandish as it sounds. Though Dodger Stadium wouldn’t be able to pack in as many people as the other stadiums, so the chances are probably nil.