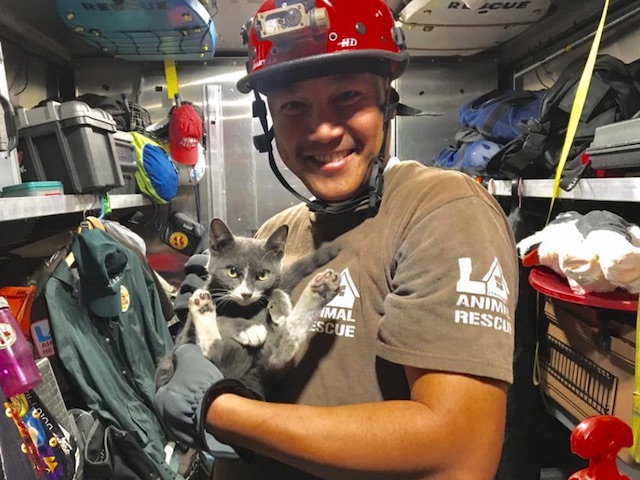 The Specialized Mobile Animal Rescue Team of Los Angeles (or SMART LA) has seen its share of dramatic rescues. There was this 2016 incident, for instance, when a raven was stuck on a Sony sign on the side of a building. And what about the time they rescued a cow from an overturned vehicle on the 210 Freeway?

Still, the team keeps running into new scenarios, and last week was no different, when the team went inside a South L.A. shed on September 25 to discover that a kitten was trapped in a wind turbine. The kitten started to run in its attempt to flee, but this only caused the turbine to spin, putting the feline in a makeshift hamster wheel:

As noted by Armando Navarrete, creator and team leader of SMART LA, it’s still a mystery how the feline got into the turbine. “There wasn’t a ledge that led to it,” Navarrete told LAist.

It was a relatively easy rescue (just this week the team had to go down a 25-foot shaft in Venice to grab another kitten), but the story still lacks an ending, as the kitten is now awaiting adoption at the South LA Animal Shelter. SMART said in a Facebook post last week that the kitten is “not doing so well at the shelter,” adding that she “is very scared and confused and needs to be adopted." Navarrete told LAist that the feline was friendly during the rescue, but was starting to "exhibit some behavioral issues at the shelter."

"She's been confused. I think she's just been very stressed out," said Navarrete.

We called the shelter to inquire about the adoption status and well-being of the kitten, but no one was immediately available for comment. Though, at time of publication, the cat was listed as being available for adoption on the shelter’s website. The kitten is said to be about seven months old.