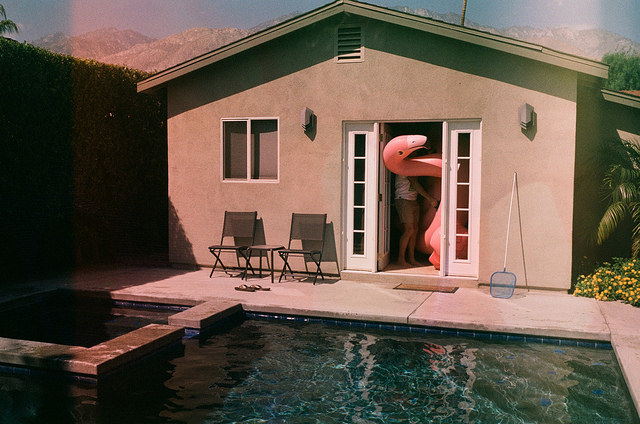 (Photo by sadjeans via the LAist Featured Photos pool on Flickr)

The Germans seemingly have a word for everything, hence the expression (and ever-popular Twitter joke set-up) "There should be a German word for ____."

It's not that they necessarily have more words than us, but rather more incredibly useful compound words that describe extremely specific things. It's like they have access to a whole secret language edited by Gordon Lish, with as much compressed truth about the human condition as a Raymond Carver short story detail.

Schadenfreude (literally translates into English as "harm-joy"; more accurately described as pleasure taken at the misfortune of others) is probably the most well known of these wonderfully descriptive Deutsch words, but quite a few others have made their way into regular English usage, including zeitgeist, doppelgänger, and wanderlust.

My personal favorite is waldeinsamkeit, or the feeling of being alone in the woods. (To be clear: not actually being there, just the feeling of it). Other greatest hits include lebensabschnittpartner ("the person I am with today," used similarly to "partner" or "lover" but with much more temporal precision, and a sense of transience), kummerspeck ("grief bacon," connotes the weight gained due to sorrowful emotional overeating), kopfkino ("head cinema," meaning when your imagination starts to play a situation in your head like a movie), and weltschmerz (literally translates as "world pain," but describes "the weariness that comes with knowing that the world is going to let you down no matter what and there’s nothing you can do to stop it," as Merriam-Webster puts it).

Here, in no particular order, are the very specific Los Angeles experiences that most deserve their own German shorthand:

The Social Permissibility Of Cancelling Plans Ahead Of Time After Realizing That They Require Cross-Town Travel At Rush Hour We've all been there. It's a Monday. You and your friend Amy make plans to get dinner in Hollywood on Wednesday. Sometime after lunch on Tuesday, you realize that you'll be required to take multiple freeways to get to said dinner and so you politely wriggle out of the plan. Maybe you lie, maybe you don't. But either way, your real reasoning is clear and she understands. Like it or not, this is a weirdly socially acceptable reason for cancelling plans in Los Angeles, as long as you don't flake at the last minute.

Making Eye Contact With Someone And Being Unable To Tell If They're On A TV Show Or A Friend Of A Friend But seriously, is that guy you just smiled at in line at Ralphs famous, or did you make out once at Spaceland? Is he smiling too, or did he just see you smile and respond accordingly? Can someone please invent a Shazam for celebrity faces, or would that have creepy privacy implications? These are the questions we grapple with. Also, are there actually less than 10 items in your basket, or are you about to get booted from the express checkout lane in front of a man who is maybe on an NBC show or who maybe once sort of touched your left breast while trying to put his hand down your shirt at an unmemorable concert in 2008? Maybe both!

The De-Centering Despair Of Walking Three Blocks To Your Favorite Taco Truck And Finding It Not There You thought this was the one thing in life you could count on. You were wrong.

The Unspoken Understanding That At Least One Assistant Is Listening In On All Industry Phone Calls What, you didn't know? Everyone in Hollywood operates under the implicit knowledge that at least one assistant per player is quietly on the line, taking notes, during the call. It's such a given that people often forget, but do remember that your agent's assistant is most definitely on the line the next time you're confessing your deepest personal fears to them...

The Realization That Every Person In This Very Crowded Strip Mall Restaurant Read The Same Jonathan Gold Review As You But please, continue trying to convince everyone at your table that you've been "coming here for years."

The Specific Brand Of Late Afternoon Light That Makes Dingbat Apartment Buildings More Beautiful Than The Parthenon There is a very specific kind of Los Angeles light that sometimes sets over the city in the hours before the sun sets, sanctifying everything in its path. It is the light that turns shadows pink and bathes the city in a kind of glow. And it is also in this light that even our dingbat apartment buildings—those omnipresent, oft-loathed and ever boxy buildings gracing many an L.A. street—recast in magic. Under the noonday glare that very same dingbat might have been nothing more than a glorified garage, but now it is briefly glorious—the palm tree-framed, tragic hero of its very own tale of sunshine and noir.

The Disorientation Of Living In A Season-less Present How do you mark time when winter never comes and a January heat wave can bring crowds to the beach? I feel strongly that are there are only two seasons in Los Angeles, jacaranda season and fire season, and both are my favorite. That said, others have lobbied for the inclusion of pilot season, awards season, junket day at the Four Seasons, and football season (the last of which does not seem to be getting much traction). Regardless, the general lack of "real" seasons can be disorienting for newcomers, especially in a city where age itself is a malleable concept. "The terrible thing about LA," as Orson Welles once put it, "is that you sit down, you're 25, and when you get up you're 62.”

The Weird Sadness Of The Car In Front Of You Getting Off The Freeway After You've Been Behind Them For 10+ Miles Sometimes the world can be a very lonely place, and sometimes there is a strange (hopefully shared) camaraderie to traveling alongside another vehicle for a substantial length of time. Maybe you have imagined an entire life for the people in 2012 Honda Civic that was directly in front of you from 1:20 a.m. to 1:40 a.m. last Sunday morning when you were among the only cars short-circuiting the city on the 10 freeway. Maybe you did nothing of the sort, but either way you were briefly in sync, and now you are not. Once, you were on the same road but now they are gone. Bye.