Ever Bar Brings Delightfully 'Weird' Cocktails To A Hollywood Hideaway 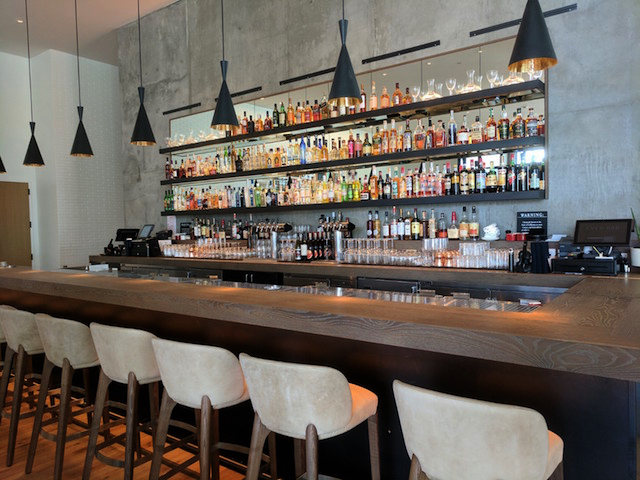 Ever Bar, located inside the Kimpton Everly Hotel in Hollywood (Juliet Bennett Rylah/LAist)

The 216-room Kimpton Everly Hotel quietly opened this summer before celebrating its grand opening last week. It's an imposing, silver building that, at fifteen stories high, looms over the corner of Yucca Street and Argyle Avenue just south of the 101. Inside, however, it's sleek and welcoming with a restaurant and bar that are already attracting locals with their clever cocktails and Southern Californian cuisine.

Jane Q is the hotel's bright, street-facing coffee shop and restaurant, where one can easily grab a coffee or cold brew (they serve LAMILL) or sit down for a casual breakfast, lunch, or dinner. Executive Chef Bryan Podgorski, who also oversees the kitchen at Kimpton's Hotel Palomar in Beverly Hills, describes the menu as "farmer's market cuisine with a Southern twang." This so-called twang can be found in the grits and eggs' accompanying red-eye gravy, or their Savannah B.E.L.T., made with candied bacon, a fried egg, pickled green tomato, and spicy pimento cheese. 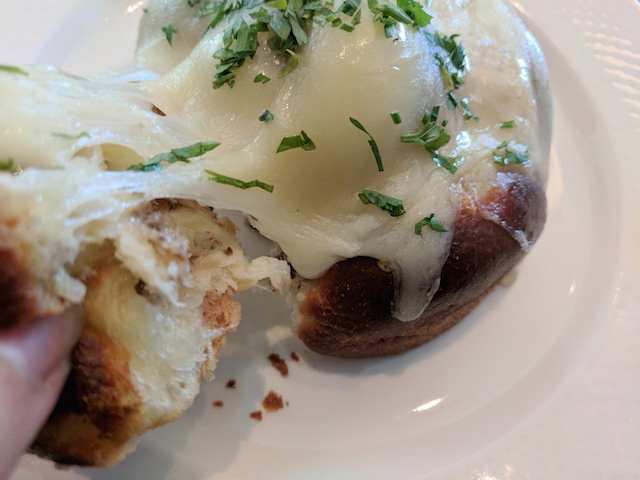 Italian influences can also be found, including the pizzas baked fresh via a rotating-deck oven, or the heavier Duck Confit Monkey Bread, in which a very generous portion of Taleggio cheese is melted over the savory, pull-apart bread. The latter can also be found one floor up at Ever Bar, along with favorites including shrimp cake sliders, a hot chicken sandwich, and pretzel bread served with pub cheese. For something lighter, their seasonal ceviche can be scooped up with crisp chips, flavored with furikake. For dessert, get the buttermilk panna cotta with stone fruit (arguably the best fruit) if the season obliges. 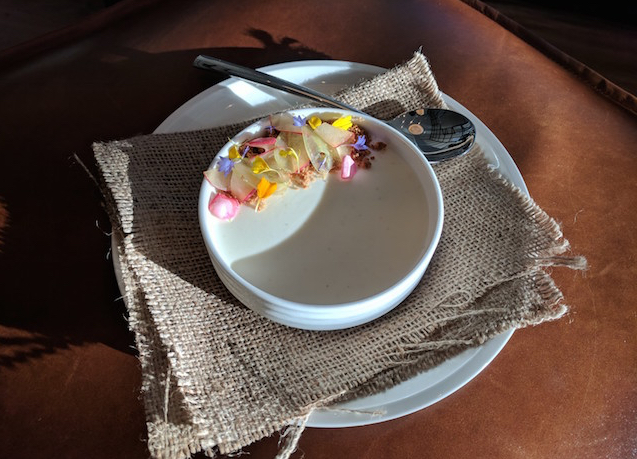 The spacious Ever Bar has some of the more interesting cocktails in an area already full of cocktail bars. It's split into two distinct spaces: the living room, and the library. The living room is the larger of the two, full of comfortable couches and chairs for casual catch-ups among friends and co-workers. Floor-to-ceiling windows offer a view of the nearby Capitol Records tower. The library is a partially secluded den, with wrap-around couches and several books to browse. 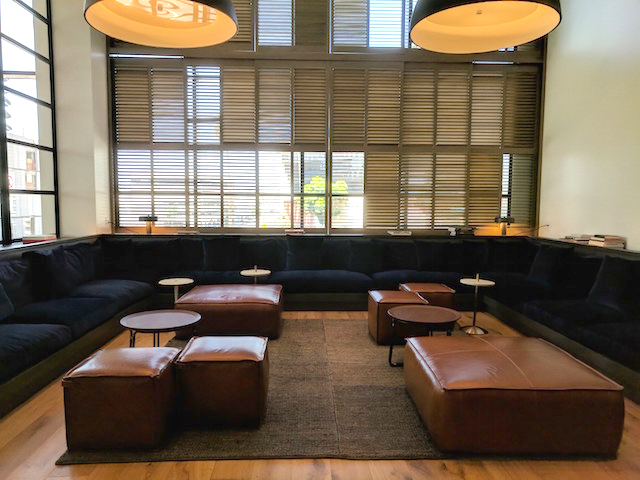 Their expansive cocktail list is divided into four sections: Riffs, Reissues, Basement Tapes, and the Hits. Some of them seem a little strange, but Lead Bartender Dan Rook assures LAist they're not outlandish.

"Anyone who tells you they're reinventing the wheel in the classic cocktails game is full of it," Rook says. "Everything is rooted in the classics. Everything is rooted in proper technique, and, quite frankly, in [caring]. Our biggest thing is fresh ingredients, fresh juices every day, and if we can make it in-house, we'll make it in-house. When you start with that mentality, you can get as weird as you want."

The Riffs are well-known cocktails, spun with Ever Bar's own take. For instance, the pleasantly boozy NOLA's Rushmore is their sidecar, made with Pierre Ferrand 1840 Cognac, Pierre Ferrand Dry Curacao, Rittenhouse, Fernet, cinnamon, and lemon. It's served up with a rim of black Hawaiian sea salt. Drink Your Vegetables is "a margarita on steroids," Rook says, and is mixed with a black garlic broccoli shrub. Their Millionaire—titled Bone Thighs and Harmony—is a collaboration with the kitchen and incorporates a duck confit bone broth. Rook describes it as the "weirdest" drink he's ever made, and it's definitely not the kind of drink you'd order twice in a night. However, the opposite is true of the Bananas in Pajamas. This take on a Scorpion uses a cooked banana and honeydew shrub to add a sweetness to Three Sheets Spiced Rum, Camus VS Cognac, Orgeat and lemon. Everything comes together perfectly, and it's no surprise this cocktail's become a house favorite. 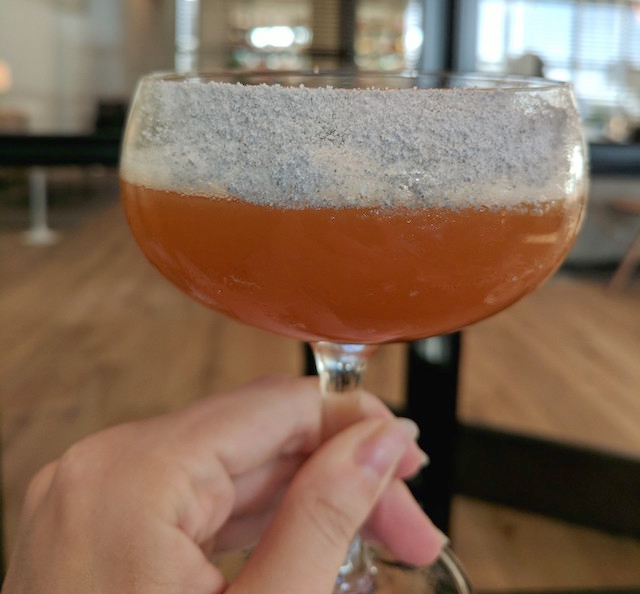 The Reissues are "normally bullshit drinks I always swore I'd never serve," Rook explains, but deconstructed and "reissued" in a palatable fashion. For instance, their Sex on the Beach turns a sugar nightmare into a more drinkable concoction by ditching peach schnapps and canned juices for a highly concentrated peach tea and a peach jam folded into honey vinegar.

If your college days had you swear off Lemon Drops for life, you might find you enjoy Ever Bar's more floral take, made with a lemon verbena and citrus geranium-infused vodka, lemongrass syrup, fresh lemon juice, and a hint of citrus in the sugared rim.

The Hits are the classics found on most cocktail bar menus—your Pimms cups, negronis, and old fashioneds. The Basement Tapes are more obscure, pre-Prohibition cocktails that are rarely seen either because they're often done incorrectly and therefore poorly, or have just been forgotten about altogether. These include the Monkey Gland (gin, orange juice, pomegranate, absinthe) and Corpse Reviver No. 1—these days, it's typically Corpse Reviver No. 2 that gets all the attention, Rook says. 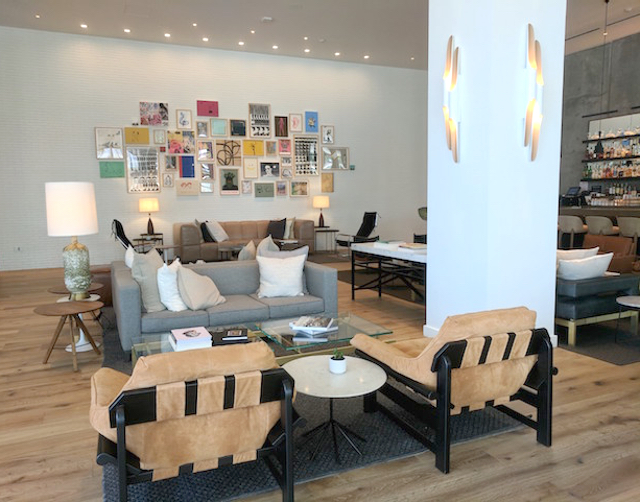 It wouldn't be wrong to note a lot of shrubs have found their way onto this menu. Ever Bar keeps about a half-dozen behind the bar at any time, all made in-house. To make a shrub, Rook explains you take a base flavor—let's say strawberries—then add sugar and vinegar. A more complex shrub, like the one found in Drink Your Vegetables, was made by mixing charred broccoli, apple cider and white wine vinegars, and cane sugar, then adding a blend of black garlic, ginger, orange peel, fennel seed, cayenne, and Korean chili powder. Rook says to think of shrubs like pickling, in that you can take an ingredient like a fruit picked at the height of its season and give that flavor a longer shelf life. 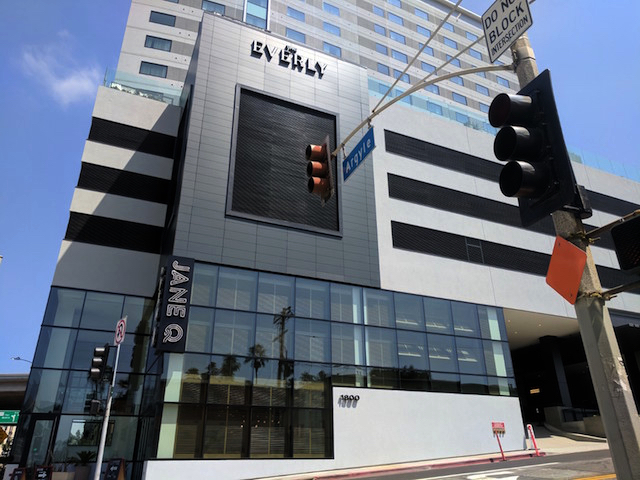 Ever Bar seems to have become an early-evening favorite among those headed to see Hamilton at the Pantages, or those looking to get a little work done in a quiet, sunny space away from the bustle of Hollywood Boulevard. Those locals who become regulars may receive a token or similar object that will allow them to unlock secret menu items or bonuses. So be nice to your bartenders and enjoy.