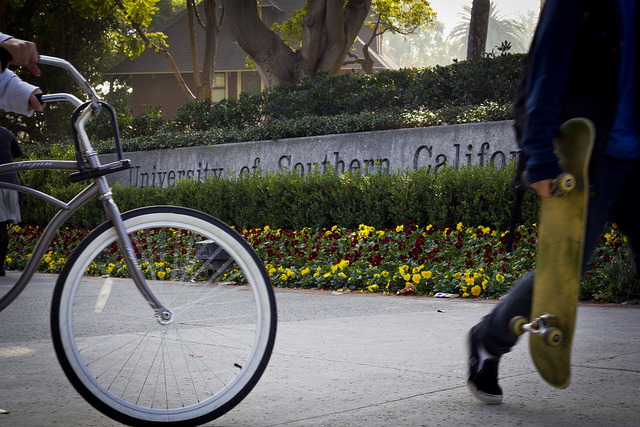 (Photo by Neon Tommy via the Creative Commons on Flickr)

The University of Southern California just announced a new policy that will require incoming freshmen and transfer students to complete at least 12 units and have a 2.5 GPA before they can rush any fraternity or sorority. This is a departure from the school’s current policy, which allows new students in their first semester on campus to rush sororities and fraternities.

Vice President for Student Affairs Ainsley Carry released a letter outlining the new policy to the USC community on Friday, according to LA Weekly. The new policy will go into effect in fall 2018.

The decision came amidst much dissent from critics, as the new policy will essentially abolish the Greek fall recruitment season geared towards incoming freshmen. The USC chapter of the Panhellenic Council read a letter at Tuesday’s Undergraduate Student Government Senate opposing Vice President for Student Affairs Ainsley Carry’s impending announcement.

USC’s Daily Trojan quoted Panhellenic Council president Jamie Kwong as saying, “We are concerned that if new potential members who want to join our community are not able to, they will not be able to receive the education that our community provides or mentorship and wellness that come with having older girls to turn to.”

Similarly, the Interfraternity Council released a statement Thursday, asking the University to consider a three-pronged approach: “committing to a public meeting with supporters of the Greek community, creating a committee to provide solutions to address all parties’ concerns and agreeing to a non-binding mediation before an objective audience.”

Carry’s letter addressed critics’ opposing views: “I read dozens of emails from parents, alumnae, and students. I also read the Interfraternity Council and Panhellenic Council’s thoughtful position statements on the topic. I heard voices on both sides of the discussion.”

Ultimately, Carry decided that “the benefit of allowing new students one semester to acclimate to USC academics and social life far outweigh the benefits of not making this policy change.”

The Daily Trojan reports that Carry plans to assemble a task force consisting of the Greek Council, Undergraduate Student Government, and the Office of Fraternity and Sorority Leadership to determine the best way to implement the new rule.

This policy diverges from cross-town rival UCLA, where individual sororities and fraternities decide when students can rush.