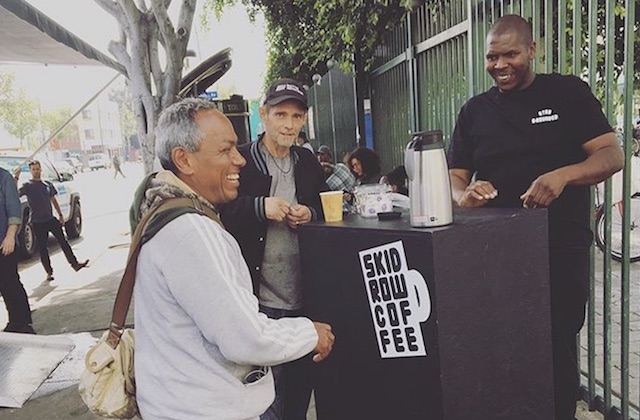 It starts with a coffee shop. Then comes an art gallery. Then, before you know it, a neighborhood has gone from working class to unaffordable. Sometimes developers will even give it a cute new nickname, just so there's no confusion.

But Skid Row Coffee, a community pop-up project that began serving the neighborhood a little more than a year ago, doesn't hide the fact that it's centered in Skid Row. In fact, part of its mission is to embrace and cater to the community around it, rather than displace it. You might consider it a coffee project that actively opposes gentrification. Co-founder Danny Park has another way of describing it: "A community space disguised as a coffee shop."

The roving cart and catering enterprise, which Park hopes to open in a brick-and-mortar storefront by early 2018, primarily serves residents of the 50-block area of downtown Los Angeles known as Skid Row. The coffee is donated by Culver City roaster Bar Nine and brewed to customers for free or on a sliding scale. The cart, typically manned by Park and his friends Andrew Kang and Jayvon Burnett, frequently holds court at the nonprofit Lamp Community Arts Program, L.A. Community Action Network, and at Skid Row History Museum, where it pops up every Saturday from 2 to 5 p.m. and during free movie screenings held the first and third Fridays of the month. The coffee cart is also a staple in the neighborhood's two parks, Gladys Park and San Julian Park.

Though it aims to serve the Skid Row community, Skid Row Coffee takes catering gigs outside of the neighborhood as a means of sourcing revenue; after all, that storefront isn't going to lease itself. The cart has previously catered parties for companies like Facebook, Park says, and works closely with L.A. City Hall and the Mayor's office. It also works with activist groups like Black Lives Matter, which Park sees as an essential force for community organizing in Skid Row, whose homeless population—estimates range from 4,000 to 11,000—is predominantly black. In a show of solidarity with the group, some of Skid Row Coffee's paper cups—designed by Park, a graphic designer by trade—are printed with the words "Black Lives Matter."

Park says his interest in the community stems from helping out at his parents’ Skid Row convenience store, Best Market, from the time he was nine years old. The one thing he noticed again and again, he says, is that there weren’t a lot of safe places in the neighborhood where people could go to just hang out. “I remember the feeling when I was younger that it didn't feel right, something didn't feel good,” he says. "As I grew up, I felt conditioned that it’s okay to ignore someone that looks like they obviously need help.”

Skid Row Coffee's roving cart can be found around the Skid Row neighborhood, and at the Skid Row History Museum every Saturday from 2 to 5 p.m. One hundred percent of their proceeds go toward helping people experiencing homelessness transition back into the housed community. (213) 247-3217.