Get Ready For The Grand Central Market Cookbook

Grand Central Market, arguably the single dining destination most emblematic of the city, is releasing a cookbook. GCM owner Adele Yellin and creative director Kevin West collaborated on the book to celebrate the Market's 100th year in business (yes, you read that right—the Market is officially a centenarian). It will feature a history of the Market alongside recipes from all the stands and it comes out October 3.

This isn't a layman's guide to the Market, either. Want breakfast? Try the Slut from eggslut, or maybe huevos rancheros from Jose Chiquito, or the Turmeric Almond Macadamia Milk latte from G&B. Tacos? Try nine different recipes. For lunch, maybe the sticky rice from Sticky Rice or the curry udon from Bento Ya Japanese Cuisine. Or Olio's wood-fired margherita pizza. Don't forget happy hour with herb tahini dip from Madcapra or artichoke "hot wings" from Golden Road Brewery. Finish off your day with banh mi lamb burgers from Belcampo, or maybe Carne Guisado from Sarita's. Supplement with a radicchio salad from Bar Moruno (R.I.P) or sope de verdura from Torres' Produce. Oh, and get this: you can now make the bread pudding from Horse Thief BBQ. This cookbook is straight-up a murderer's row of some of the best food in Los Angeles.

Yellin told L.A. Weekly that she originally envisioned the cookbook as a collection of recipes. Instead, “[i]t’s a richly written 'oral' history of the market. The cookbook is as complex and varied as the market itself.” The bright, lively cookbook alternates recipes with quotes and stories from the cooks and chefs who have built GCM into the mecca it is now. Yellin and West asked each stand to contribute the recipe they found "best represented his or her stall’s offerings," West told the Weekly. They also took into consideration the average home cook's resources and capabilities (hence Horse Thief including their bread pudding but not their smoked brisket).

The Market has also changed since the book's publishing deadline, so long-gone stands like Bar Moruno are included whereas new stands like Sari Sari Store aren't. The answer to the problem? Writing future volumes of the cookbook. In the meantime, though, there are a lot of recipes to get through in just this one. To get started, here's the recipe for "The Slut" from Eggslut. 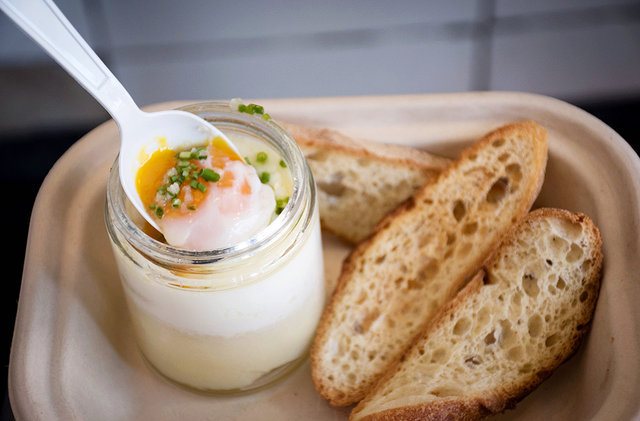 The signature "Slut" at Eggslut. (Photo by Julia Wick/LAist)

1. In a large stockpot, bring 7 quarts water to a rolling boil over high heat. Stir in the sea salt. Add the diced potatoes, and cook until fork-tender, 15 to 20 minutes. Turn off the heat, and remove the potatoes with a slotted spoon, reserving the water in the pot. Run the potatoes through a food mill or ricer until smooth. Stir in the butter. Add kosher salt to taste.

2. Transfer the potato puree to a piping bag (or zip-top plastic bag with the corner snipped off) and divide it evenly among 4 half-pint mason jars, filling each about one-third of the way. Crack an egg into each jar on top of the puree, and seal the lids. Return the water on the stove to a simmer over medium-high heat. Place the jars in the simmering water and cook for 15 minutes, or until the egg whites are set. Remove the jars from the water, and take off the lids. Garnish each with a sprinkle of chives and sea salt. Serve with the toasted baguette alongside for scooping.

The Grand Central Market Cookbook is available for pre-order here.