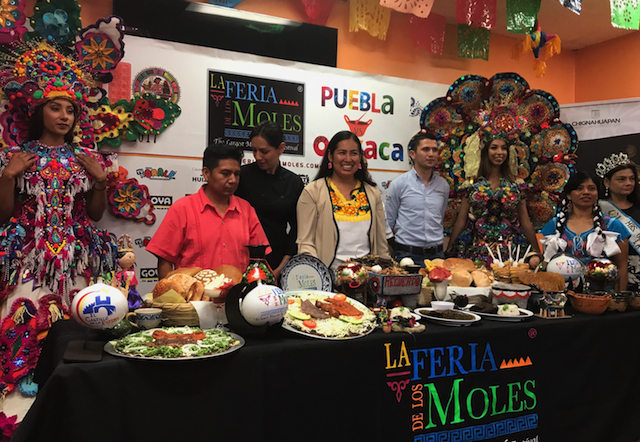 This Sunday, Grand Park will play host to the 10th annual La Feria de los Moles, which is billed as the biggest annual Mexican food festival in the United States.

There will be more than 13 different Mexican moles to sample from a variety of vendors, along with folklore and art, a pop-up "Mole Museum," and more. Admission is free, and food will be available for purchase.

There will also be an ongoing "battle" between Puebla and Oaxaca, the two Mexican states most associated with the flavorful sauce. The event, which is expected to attract 30,000 visitors throughout the day, will be held at Grand Park for the first time after outgrowing its previous Olvera Street location.

The festival was founded by Pedro Ramos, who is originally from Puebla, Mexico. "When I arrived in Los Angeles like any other immigrant with a hand tied behind my back and the other hand in front (in other words, without anything) I began from scratch," Ramos writes. "I only had a dream and a university title from my country that was no longer valid here. I also faced a language barrier because I did not know English. I was able to get ahead and I started a family business. In my nostalgia for the gastronomy of Mexico, in my case, Puebla, I remembered the food of my grandmother."

Inspired by his grandmother Doña Kailita, Ramos started the festival a decade ago, and it has grown steadily since then. As in previous years, there will also be dance and music performances (schedule here).

"La Feria de los Moles" opens at 10 a.m. Sunday and lasts until 7 p.m. at Grand Park. Grand Park is located at 200 N Grand Avenue in downtown Los Angeles. Entrance is free and the traditional food is available for purchase.