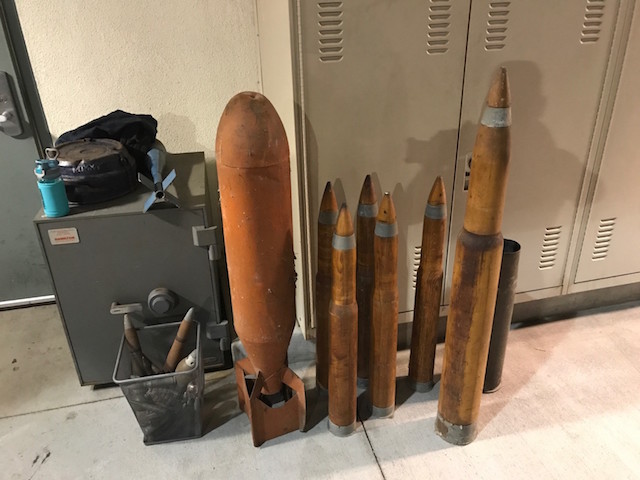 Some of the artillery recovered from the site. (Photo courtesy of the L.A. County Sheriff's Department)

About 100 residents were evacuated from a Lawndale neighborhood after a collection of military weaponry was discovered in the backyard of a vacant home, reports CBS 2.

L.A. County Sheriff’s deputies, responding to reports of suspicious activity, first arrived at the 15700 block of Avis Avenue at 11:00 p.m. on Thursday. At the site, deputies encountered a man and a woman inside a vehicle; the man later told authorities that he’d recovered a gun from a nearby home, and that there were explosives in the backyard of the residence. 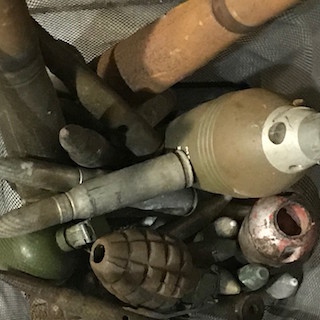 (Courtesy of the L.A. County Sheriff's Department)
As reported at The Daily Breeze, explosives experts were later called in after military ordnance was reportedly discovered on the property—a bomb squad entered the home at around 1:30 a.m. Investigators told ABC7 that they found possible grenades and large artillery shells in the backyard of the home. About 15 to 30 ordnance, some inert and some still active, were found and removed from the scene.

Heather Fuquay, a public information officer with the Sheriff’s department, told LAist that residents living one block east and one block west of Avis Avenue between 147th and 149th streets were evacuated. As of 6:00 a.m. Friday the evacuation was still in place; Fuquay could not confirm if it was still ongoing when LAist called at about 10:00 a.m.

Two people are detained by the LASD at the scene; it's unclear if they are the same people as the ones in the vehicle, and what their connection to the house was.

Deputies are making a bigger perimeter due to bomb scare in #Lawndale. @CBSLA @KNX1070 pic.twitter.com/Dsq8FAc6Dj