Will L.A. Use City Land To Open Emergency Homeless Campgrounds And Shelters? 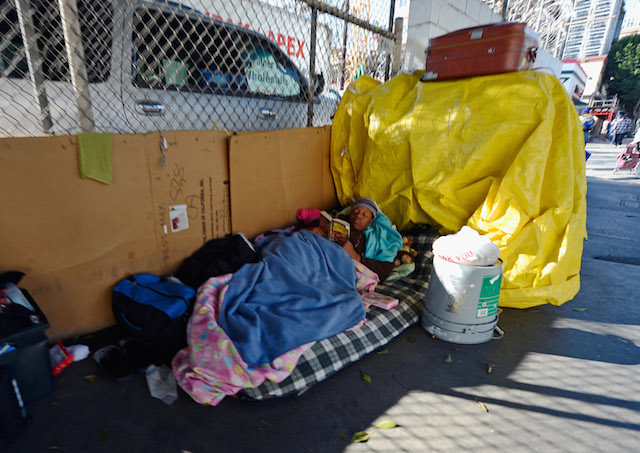 Los Angeles isn’t doing enough to protect the health and safety of homeless people living in encampments, says a report published Wednesday by City Controller Ron Galperin. The encampments, sprawling shantytowns made up of tents and piled belongings, have proliferated throughout the city in recent years as the city’s homelessness crisis reached an apex, with 34,000 people living on the streets at last count. And that’s just in the city of Los Angeles—the homeless population in Los Angeles County reached nearly 58,000 this year.

Among the myriad recommendations in the 37-page report, Galperin suggests the city should use its vacant land for emergency shelters, campgrounds and storage facilities for the homeless. ”We’re suggesting temporary accommodations to deal with an emergency situation,” says James Nash, a spokesperson for the city controller’s office, told LAist. “We wouldn’t necessarily be running [the encampments] ourselves. We would look to partner with nonprofits who have experience running facilities for the homeless.”

The report also recommends tougher enforcement of existing city laws around tents in public places and the blocking of sidewalks during daytime hours, as well as expanded showers and bathrooms for homeless people. Expanded storage is also an important component, since currently there is only one large storage facility for the homeless in Los Angeles, The Bin on Skid Row.

City-operated or -supported homeless encampments have faced trouble in the city in the past: the LA Times reports on a failed “urban campground” experiment in 1987, which closed after just a few months of operation. Seattle and Portland have also tried this approach, only to face serious problems with crime and eventually shut their own encampments down.

Still, the controller’s office thinks city-recognized encampments are better that whatever is going on now. “[The city encampments] would be safer than the status quo,” says Nash. “The status quo isn’t serving anyone.”

Public sinks and bathrooms have taken on a particular urgency in recent weeks as San Diego and Los Angeles have both suffered outbreaks of Hepatitis A among the homeless population, a highly contagious disease which gets passed through contaminated food and feces. In San Diego, the outbreak has killed 16 people and sent hundreds of others to the hospital in recent months. An outbreak was officially declared in Los Angeles last week. With 10 cases reported so far in the county, L.A.’s outbreak is far smaller than San Diego's, but has the potential to spread quickly among people living in unsanitary homeless encampments.

The situation prompted City Councilmember Mike Bonin to introduce a motion Tuesday to fund emergency portable toilets for the homeless, even before the release of the report.

Advocates for the homeless have often spoken out against harsher enforcement measures like the ones outlined in the report, which include clearing away and confiscating tents set up in public between the hours of 6 a.m. and 9 p.m. But the controller’s office argues that such measures are not meant to criminalize homelessness, but to protect homeless people.