Candy. It can screw with your teeth and your cognitive performance. But whatever, sometimes we just want to throw ourselves into the sweet oblivion of a sugar high. There's more to it than the dopamine uptake in your brain, however. There are also the buried associations; a lazy Sunday spent at the cineplex, slumber parties in the summer, that ice cream truck that was always stationed at the local park. It seems that sugar has crept into almost every cherished childhood memory.

Certainly, L.A. has its share of candy shops. We are, after all, supposedly obsessed with the sweet and artificial. Here are some of our favorite stores around town. (Note: We've excluded shops that largely specialize in chocolate. We'll save that for another day.)

This Highland Park institution is the king of all one-stop shops (and one of Huell Howser's favorites, as shown in the above video). It's best known for its giant catalog of both popular and obscure sodas; the library is international, as it includes picks from Ecuador, Australia, and the rest of the world.

If you're among the uninitiated, you might not know that there's also an Italian deli in the back that slings out some great sandwiches. And, just to the side, there's an impressive selection of candy. The selection falls in line with Galco's old-school ethos, as the candies are mostly of the retro ilk. Offerings include Bonomo’s Turkish Taffy, Mallo Cups, and Chuckles. If you're big on nostalgia, the vintage wrappers alone are worth a quick jaunt to the beloved shop. 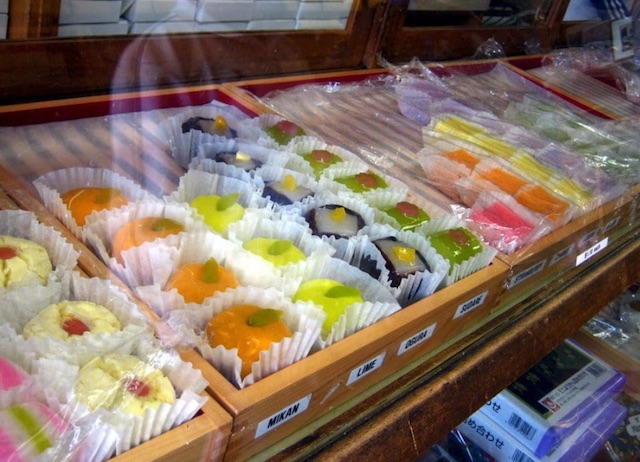 (Photo by Grace P. via Yelp)

Think about candy, and your mind may turn to the stuff that gets churned out en masse in some machine-intensive factory. That's not the case at Fugetsu-do, the mochi purveyor that's been a Little Tokyo staple for decades. Owned by the Kito family for more than a century, the mochi is handmade by the proprietors and their employees. Here, the sweetness of the goods is subtle and fragrant—you can argue that it reaches the perfect (i.e. conscionably acceptable) level of gratification.

The favorites at Fugetsu-do include their peanut butter mochi and chocolate mochi, and the kiku (chrysanthemum) mochi is perennially ready for an Instagram shot, as they're shaped like flowers. The big prize may go the shop's kuzumochi, however, a seasonal item that comes filled with a sweet azuki bean paste. With such a wide variety, picking your assortment box turns into a kind of IRL game app. 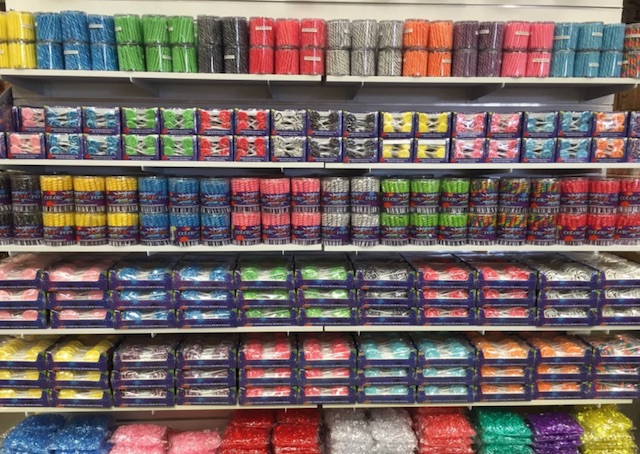 Why be forced to choose when you can have it all? Isn't candy about maximizing everything that's good in life, after all? If so, no store embodies that spirit better than Jack's Wholesale Candy.

Less so a store, and more of a warehouse; the shop is basically the Costco of sweets. From three-pound bags of Haribo gummy bears, to Hello Kitty-themed goods, to Wax Lips, Jack's has everything under the sun. It's also got one of the biggest selection of Mexican candies around town; you can buy enough Vero mango pops to fill entire cabinets in your house. There's also a wide selection of pinatas if you feel like bashing something in with a stick (and reaping the bounty afterward). 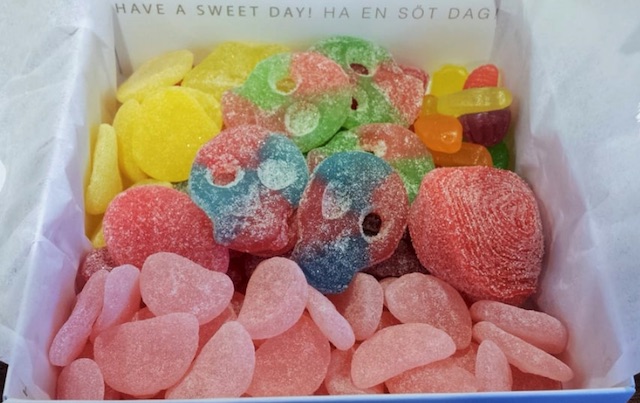 (Photo by Sandee T. via Yelp)

If Sour Patch Kids are your game, then Sockerbit should be right up your alley. This Scandinavian import has a far-reaching selection of sour (and non-sour) gummies that come in a number of shapes—they range from mimetic berries to coin-sized skulls (a memento mori can be good for you, especially when you feel invincible after downing a bag of sugar).

Outside of gummies, the store focuses on other fun-sized treats such as licorice, chocolate, and hard candies. We recommend getting the tiny marshmallows; they’re the namesake of the store, after all. As the store informs us, “sockerbit” translates to “sugar cube,” which is also the name for their irresistible cube-shaped marshmallows. The store also boasts of their candies as being free of trans fats and artificial coloring, which means you’ll have a (relatively) clear conscience as you wolf down the goods. 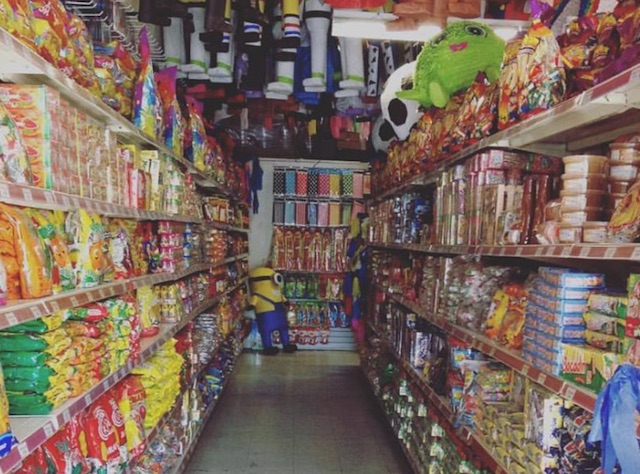 If your parents never gave you the birthday parties you deserved, it’s time to head over to Dulceria Candy Land to set things rights. The store is a do-it-all for your party needs (assuming you’re looking for clean, non-alcoholic fun).

Party supplies like pinatas and celebration baskets are in abundance. For those with a sweet tooth, the selection of Mexican candies is where its at. From those Vero Pica Fresa strawberries, to the De La Rosa marzipans, all the classic hits are on display. And, since the candy come in bulk, Dulceria is a good place to visit if you’re shoring up candy supplies in your fallout shelter. One added plus is that the staff here is exceptionally helpful. 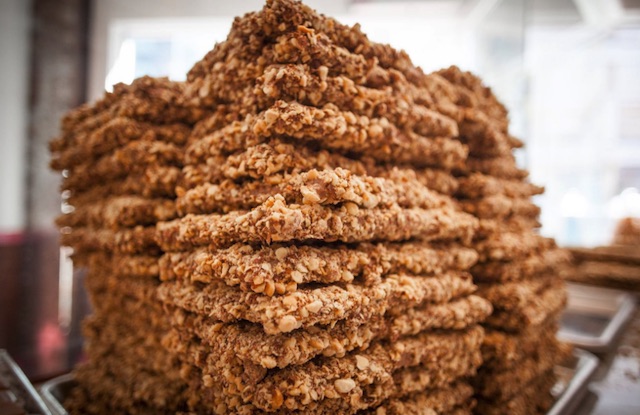 So maybe you didn’t spend your allowance on toffee when you were a kid. But, still, there’s something so wonderfully singular about good toffee: that aroma, that residual sweetness as it sticks to your teeth.

And, here in L.A., Littlejohn’s is among the most revered of toffee makers. The English toffee sticks—which come covered with fresh roasted almonds—is a great party treat. And if you’re in the mood for something especially indulgent, you can have the toffee topped with pistachio and coated in chocolate.

Littlejohn’s has a great selection of caramel goods as well. We’re not sure how you can possibly improve on the caramel-covered marshmallows; their greatness is self-evident. The same can be said of the salted caramel squares and the “carmello” chocolate bars (caramel + marshmallow = carmello). 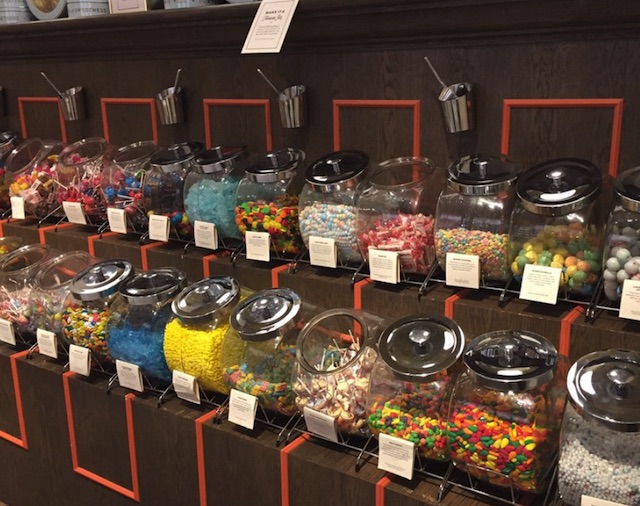 (Photo by Selena M. via Yelp)

With many locations around the world, and nine in California alone, Lolli And Pops’ neighborhood-soda-fountain schtick may come off as a bit too precious. But a candy store lives and dies by its products, and the franchise has it all. There’s an encyclopedic selection of gummy bears and jelly beans, as well as old standbys like Nerds and Reese's that come in comically large boxes. And, if you’re making a gift package, there’s a selection of lollipops that are designed with a theme.

We know we said we’d refrain from talking about chocolate too much, but it can’t be denied that Lolli And Pops makes some seriously good chocolate. The chocolate truffles are exceptionally indulgent, and the chocolate BBQ potato chips aren’t as weird as they sound. 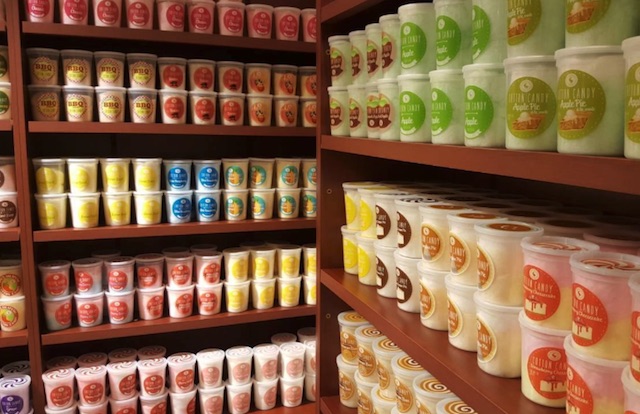 Located at Hollywood and Highland, and decorated with novelty flourishes like a collection of toilets, and sometimes utilized as an events space, Sweet! may rouse your suspicion. Is the store in it for the tourist game? Or are they serious about sugar? The answer is somewhere in the middle.

The sprawling store is so big and all-encompassing that it’s split into segments. There’s a set-apart store for Sticky, the purveyor of hand-made, hard candy that come in a number of quaint designs. There’s also a Chocolate Lab where you can design your own chocolate bar.

True to its location, the shop is about selling a candy lifestyle as much as the candy itself. There’s some technicolor apparel from Tokidoki, as well as candy-inspired artwork like this portrait of Adele that’s made of black licorice, gummy bears, and Tic Tacs. It’ll set you back a cool $1,800, but it’ll really bring your living room together.