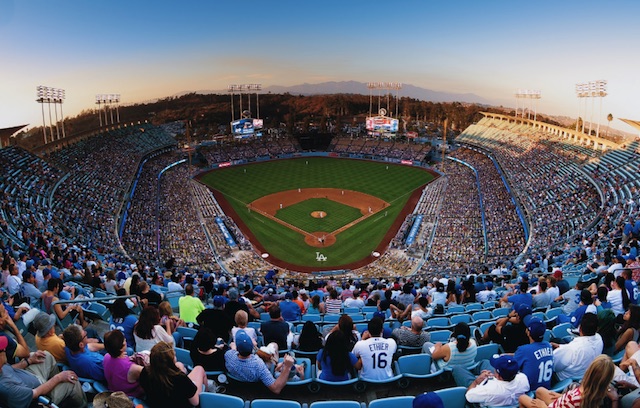 (Photo by jescalera via the LAist Featured Photos pool on Flickr)

A couple filed a lawsuit Tuesday over an altercation that took place outside Dodger Stadium after a Dodgers/Mets playoff game in 2015.

One of the plaintiffs, Bakersfield resident Ariel D. Auffant, says that he was beaten and suffered severe brain trauma as a result of his injuries, reports City News Service. The lawsuit was filed against the Dodgers and the alleged assailants. In regards to the team, the suit alleges negligence, premises liability, and negligent hiring, among other things.

The incident took place on October 9, 2015, after Game 1 of the National League Division Series in which the Dodgers played the New York Mets. As reported by NY Daily News, police accounts said that Michael Papayans (then 27) and his mother Jennifer Papayans (then 54) got into an argument with a group of four that included Auffant. Jennifer approached the individuals, one of whom was reportedly wearing a Mets cap, and got into a verbal confrontation with them. Michael later joined in and reportedly punched Auffant. According to NY Daily News, Auffant struck his head on the ground and suffered serious injuries. The Daily Breeze reports that Jennifer also allegedly kicked Auffant in the back while he was on the ground.

Sheila Papayans, Michael’s grandmother, would later tell the Daily Breeze that Michael was attempting to protect his mother (Sheila was not present during the incident). “They started by attacking my daughter and pushed her down because they didn’t like what she was saying,” said Sheila.

Michael would not be arrested for the incident until February of 2016. He was then charged with assault by means likely to produce great bodily injury. He entered a no contest plea this February, and is due to be sentenced in February 22, 2018, reports KTLA.

About a month after his arrest, Michael was named as a defendant in a class-action lawsuit that claimed he and others as being members of the so-called "Lunada Bay Boys." The group has been accused of hoarding a part of Lunada Bay for themselves (they had their own “fort” in the area), and harassing beachgoers who come into the area to scare them off. They’ve also been accused of sexual harassment and, in one lawsuit, of wearing blackface on Martin Luther King Jr. Day. In January of 2016, Michael and Nick Carter of the Backstreet Boys (the two are reportedly friends,) were arrested after a bar brawl in Key West, Florida.

It’s not immediately clear if Michael and Jennifer Papayans are the other defendants named in the lawsuit filed by Auffant and his wife Abigale.

In 2011, Bryan Stow was victim to a beating at the hands of Louis Sanchez and Marvin Norwood at Dodger Stadium. The incident left Stow, a father of two, permanently disabled. Stow's family would file a civil suit against the Dodgers—in 2014 a jury found the organization partly liable for the $18 million in damages that was awarded to Stow. Sanchez and Norwood pleaded guilty to charges of mayhem and assault. Sanchez received an eight-year prison sentence, and Norwood received four years in state prison.

LAist reached out to the Dodgers for comment but did not immediately hear back.