The 7 Most Iconic Cemeteries In Los Angeles

Here’s my theory: L.A. is the gothest city in America. Sure, other cities have a gothier history (or even a pseudonym with "goth" in the name), but L.A. is the real goth because it is sunny all year round, and yet we’ve changed and originated many concepts that are associated with modern-day cemeteries. This goes without saying that, here in L.A., we play with the duality of aiming for eternal youth and knowing that death will inevitably consume us.

The best way to cozy up with this existential dread? Visit a cemetery and commingle with the flyest residents of the afterlife, of course. You’ll also find that L.A.’s cemeteries offer some lush (or creepy) sights, and are backed with important history. Here are some of our picks for L.A.’s most iconic cemeteries. 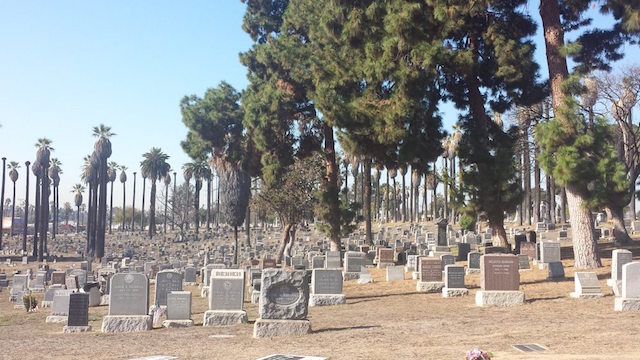 (Photo by Adri N. via Yelp)

The Angelus-Rosedale Cemetery lacks the glitz and glamour of Disneyland cemeteries like Hollywood Forever. It flanks West Adams and Pico-Union, filling the area between Washington and Venice Boulevards along Normandie Avenue. The grass is fairly brown here, and despite the towering palms, it gives the impression of complete lifelessness. Look more closely, however, and you’ll find that this cemetery is the basin of L.A.’s history. The cemetery was built in 1884, far before many of the cemeteries on this list, and every name of L.A.’s mythology can be found among the gravestones. David Burbank, whom Burbank is named after, is buried here. Phineas Banning, who founded the town of Wilmington and laid the foundation for the Port of Los Angeles, can be found here as well. Also, several former Los Angeles mayors are buried here. It's worth mentioning that this space is far less busy than any of the other, more popular cemeteries, so take your time as you mingle with the dead.

The Angelus-Rosedale Cemetery is located at 1831 W Washington Blvd, Los Angeles. It is open every day from 8 a.m. to 5 p.m. 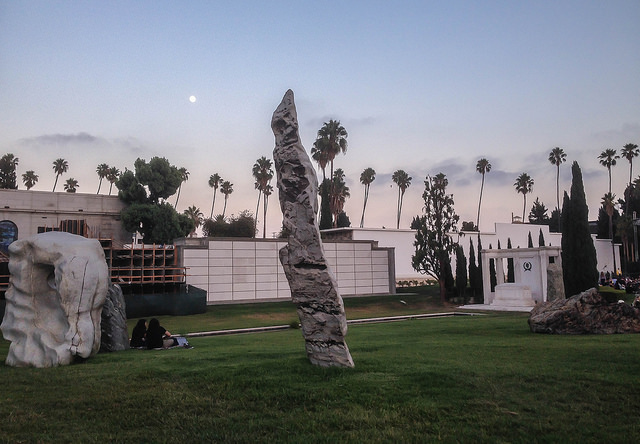 Hollywood Forever is one of the best cemeteries in the world. It is a majestic park filled with palm trees and ponds, is the burial site of Hollywood icons like Toto and Mickey Rooney, and is filled with some pretty nuts and over-the-top mausoleums. It sits in the middle of the packed Melrose district just north of Paramount Studios. Where else can you wander among the gravestones of iconic Hollywood figures, just steps away from the center of a major city, with the sun beating down on a perfect Southern California day? It is also the site for one of L.A.’s most reliable summer activities: Cinespia film screenings. Here at Hollywood Forever, we grin and chuckle among corpses!

Hollywood Forever Cemetery is located at 6000 Santa Monica Blvd, Hollywood. It is open every day from 8:30 a.m. to 5 p.m. 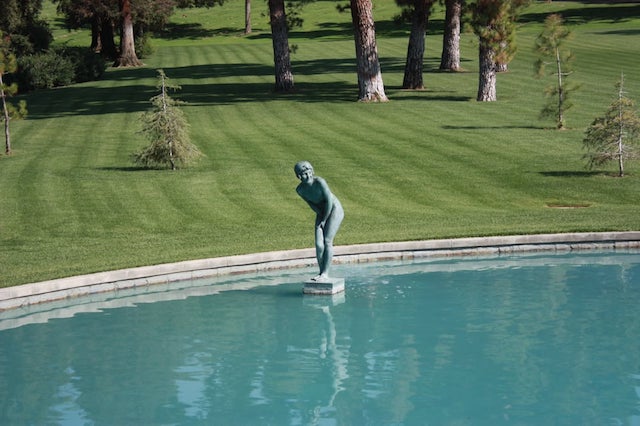 Forest Lawn Memorial Park. (Photo by Edward B. via Yelp)

On January 1, 1917, Hubert Eaton made his permanent mark on the cemetery world (a dream we all aspire to) and vowed to reinvent Forest Lawn Cemetery into a celebration of life after death, rather than as a reminder of our mortality. Specifically, he wrote: "I therefore prayerfully resolve on this New Year's Day, 1917, that I shall endeavor to build Forest Lawn as different, as unlike other cemeteries as sunshine is unlike darkness, as eternal life is unlike death." He eschewed tombstones, and instead turned Forest Lawn into an amusement park for aesthetic cross-contamination. The park features architecture from the English countryside and ancient Rome. He also really, really loved Jesus; two of the largest paintings of Jesus' Last Supper and Crucifixion are on display at the cemetery. The Memorial Park is massive and serves as a testament to L.A.'s ability to conjure up new ways of circumventing reality. Eve Babitz said of the place, "LA didn't invent eternity. Forest Lawn is just an example of eternity carried to its logical conclusion." 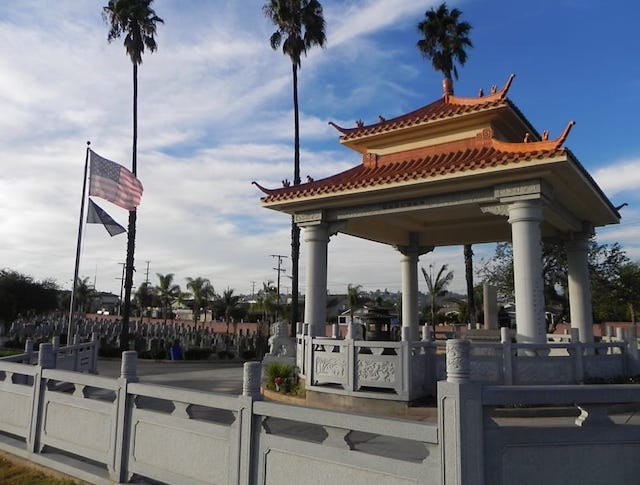 The Chinese Cemetery. (Photo by Christine A. via Yelp)

If you look at the history of the Chinese Cemetery of Los Angeles, you'll find a reminder of how pervasive racism can be. The cemetery in East Los Angeles, right at the intersection of the 710 and 60 freeways, exists because Los Angeles citizens of Chinese ancestry were formally barred from buying burial plots in official L.A. cemeteries. The Chinese Exclusion Act of 1882 placed a moratorium on immigration of Chinese laborers for ten years, but the racist repercussions lasted far longer. Even once the moratorium was lifted, anti-Chinese sentiment had pervaded the American consciousness. As a result, up until the Chinese Cemetery of Los Angeles was built in 1922 by the Chinese Consolidated Benevolent Association of Los Angeles, Chinese citizens could only be buried in a potter's field owned by the County. Racism against the Chinese community didn't stop at their burial plots, though. Around the same time, Los Angeles razed the original Chinatown to make way for Union Station.

The Chinese Cemetery of Los Angeles is located at 102 S. Eastern Avenue in East Los Angeles. 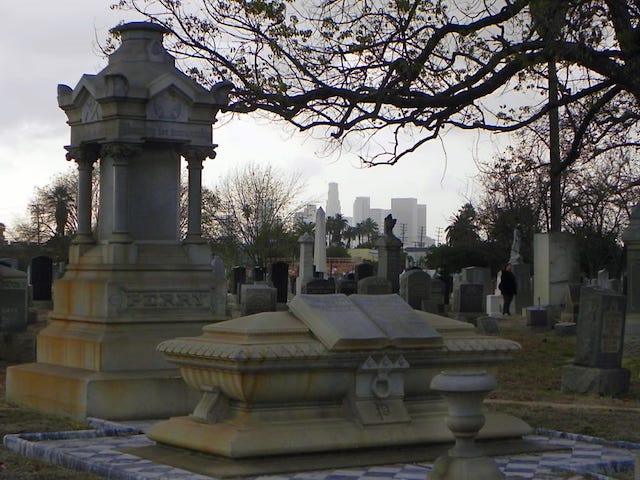 Evergreen Cemetery. (Photo by Christine A. via Yelp.)

The Evergreen Cemetery, built in 1877, is Los Angeles' oldest cemetery. Its age, coupled with its lack of upkeep, makes for a straight up haunting cemetery. It's now the perfect place to snap a picture for the album cover for your Morrissey cover band. It also houses the burial site for the Japanese Americans who fought in the 442 Regimental Combat Unit during WWII. There's even a site where 400 former carnies are buried; the Pacific Coast Showmen's Association Plot was reserved for retired or out-of-work carnies.

One other distinction about the cemetery is that, while it used to be common practice for cemeteries to ban black individuals, Evergreen was the only one to allow African-American burials. As such, a number of black actors from the 1920s and ’30s are buried in the North Hill section of the cemetery.

A lot of the poor upkeep of the cemetery may be traced to its owner, who has been accused of "grave desecration" and "unlawful burial of multiple bodies in a single plot," among other things. What's more goth than a cemetery conspiracy? Absolutely nothing. 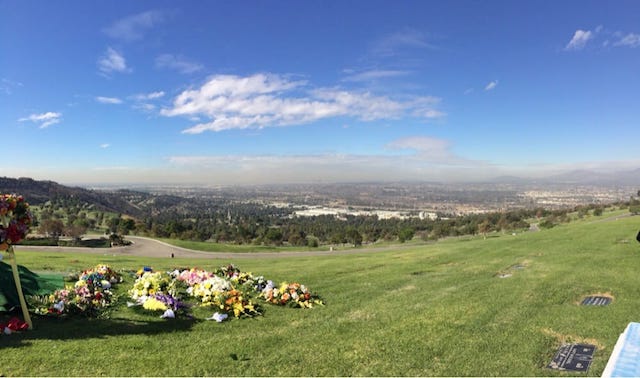 The view at Rose Hills Memorial Park. (Photo by Jenny N. via Yelp)

The Rose Hills Memorial Park in Whittier offers expansive views, several beautiful chapels, and its own pseudo-"Hollywood" sign, as any self-respecting cemetery should. By 1956, it also offered a crematorium, mortuary, and flower shop, turning it into a one-stop-shop for all death-related needs.

The cemetery has mausoleums featuring California history and Spanish Mission history, as well as the largest Buddhist pagoda in the United States. It also has chapels that range in architectural style—from California mission to modernist—as well as breathtaking views of downtown L.A. Furthermore, there's a Cherry Blossom Lawn on the property, complete with a Japanese meditation house. The Park is the burial site for a wide range of people as well; who knew Easy E and Dương Văn Minh (former South Vietnamese general and president) were buried in the same cemetery?

Rose Hills Memorial Park is located at 3888 Workman Mill Rd in Whittier. It's open everyday from from sunrise to sunset. 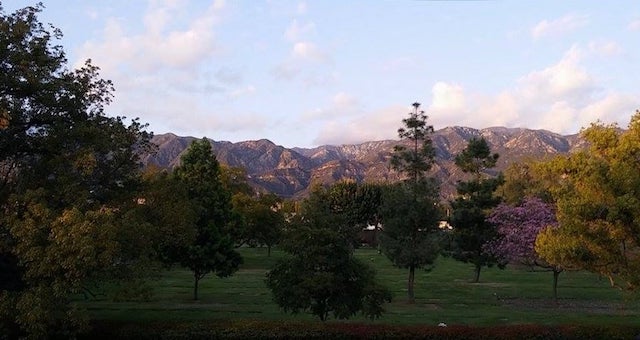 The Mountain View Cemetery. (Photo by the Cemetery via Yelp)

The Mountain View Mortuary, Crematory, and Cemetery is a family-owned cemetery in Altadena that was founded in 1882. It sits a bit east of the Jet Propulsion Laboratory and down the street from Devil's Gate, so the spirits of L.A.'s occultism run rampant in the area (and imbue the cemetery with an equally eerie vibe). The massive cemetery features some unparalleled views of the San Gabriel Mountains and beautiful, expansive grounds. Also, you may recognize it from a certain episode of The Office. In the season four episode "The Chair Model," Michael Scott falls in love with a model in a catalogue, only to discover she had passed away in a car accident. He and Dwight go to her resting spot, which happens to be at Mountain View. It's not the only cemetery scene shot there, though; Six Feet Under (the O.G. goth L.A. show), Desperate Housewives, and Seinfeld all shot there as well. For a deeper look into the spot's history, check out this half-hour documentary on Mountain View.

Mountain View Mortuary, Crematory, and Cemetery is located at 2400 N Fair Oaks Ave. in Altadena. It is open every day from 8 a.m. to 5 p.m.