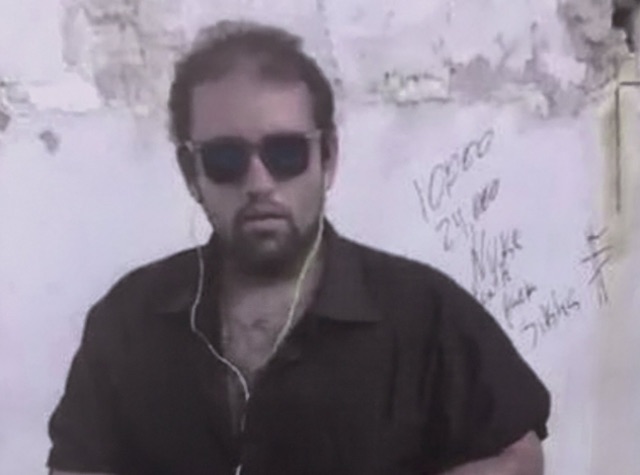 The LAPD is looking for a suspect they said had vandalized a Sikh temple in Los Feliz, and later threatened a person who had videotaped him at the scene, the department announced at a press conference on Monday.

As reported at the L.A. Times, 27-year-old Artyom Manukyan is accused of using a black marker to write a rambling message on the side of the Hollywood Sikh Temple near Vermont and Finley avenues. The message is largely incoherent, and includes the words “Nuke death,” as well as a mention of a group of Sikhs stabbing him when he was a child.

The alleged vandalism incident took place at about 2 p.m. on August 31. Police say that several people had approached Manukyan during his act, and that one individual had used a camera phone to film Manukyan at the scene.

Karna Ray, the man who’d filmed Manukyan, posted the video of his encounter on Facebook. In the footage, we see Manukyan leaving the site of the vandalism and walking away from Ray, who repeatedly asks, “Why’d you write on it?”

“I pursued him to ask him his name and why he did what he did, and after a few blocks he flashed a razor and threatened to slit my throat,” Ray said in his Facebook post. Ray said he continued to follow Manukyan until he lost track of him in a car park.

"The direct mentioning of the Sikh community and the derogatory terms, combined with him threatening to slit someone's throat, I think obviously makes him a serious suspect that we've got to take of the streets,'' LAPD Captain Bob Long said at the conference, reports City News Service.

Long said at the conference that Manukyan, who resides in Glendale or the Los Angeles area, has been arrested before on suspicion of burglary and grand theft auto. Long added that, once arrested, Manukyan could face vandalism charges with a hate crime enhancement. He would also faces charges for the threats he made to Ray.

“If (members of the public) run across this person, we do consider him dangerous. Call 911,” said Long, according to Los Angeles Daily News. Authorities add that he may be mentally ill.

As reported at CBS, some temple members say they’ve seen Manukyan around before, and that he’d actually came in and ate with them once last year. “He’s a confused guy, he doesn’t understand us. If he talked with us, come here, we can sit together. If he has questions, we’d answer,” said temple member Gurminder Seheren Singh.

“I want the damage he has in mind, I want to cure that,” said Singh. “It doesn’t matter if you are Muslim, Hindu, or if you are Christian, everybody is welcome.”

Some of the acts of hate and discrimination are committed with racist, anti-Muslim sentiments—while Sikhs are not Muslim, they are sometimes mistaken as such. In 2015, the outside of Buena Park's Gurdwara Singh Sabha was vandalized with the words "Islahm" and "F*ck ISIS.” In 2016, a Sikh bus driver was attacked in South L.A. by a passenger who accused him of being a terrorist and suicide bomber.

The LAPD urges the public to contact the Major Crimes division if they have any information on Manukyan:

Artyom Manukyan is Wanted for Hate Crime/Vandalism which occurred 8/31 in Hollywood. Contact #LAPD Major Crimes 213-486-7280 with any info pic.twitter.com/5A5HkMPHem